Part One of the Epic clash of Good vs the Elves is here. 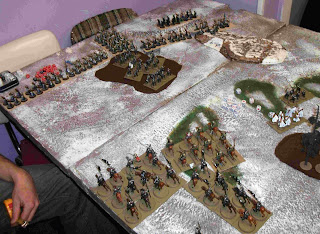 Turn three, Ithilien goes first. I form my Men-at-Arms into a wide screen and push it as close to the forest as I can get, screening the Cavalry behind. Remnants of the Rangers and Archers serve to complete the screen this turn. Next turn, the Elves will not be able to back out of the fight. Most of the Elves drop back just under 4, while the Glaives advance and occupy the wood amidst their lines. Andy asks for my advice on whether to put Thranduil in with them, I comment that "I can't comment." After weathering another pointless magic phase and losing some Rangers to shooting... Faramir leads the Men-at-Arms in a charge on the woods. They win the fight, ejecting the Elves and setting things up nicely for the next turn. 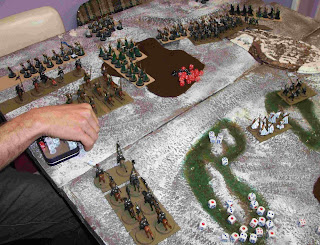 And here we are. It is turn 4. The Elves go second. Faramir leaves the woods so as to put his heavy infantry unit right amongst the longbows and I have two units of heavy Cavalry led by Epic Heroes waiting to charge the other longbows, led by Galadriel and Thranduil. The Elves form and again there magic causes only light casualties. Their bowfire does not achieve much and then knights crash into one side, and Men-at-Arms into the other. The Elven Glaives had cunningly proceeded through the forest without entering and clipped the flank of the first wave of knights with their own charge. Elwine's cavalry had been too complacent and not kept the right arcs to then counter charge a flanking move. Thus is the peril of going first. In the ensuing fights, Faramir's men actually managed to lose by a single casualty, but regrouped. At the main even, Elphir called a duel on Galadriel and Thranduil called one on him. Andy actually won, so his went first and I won by one, Thranduil's last might point went to cancel that out. Elphir then slew Gladriel and the combined effects of the duel and the charge easily saw the Cav win, though the flank charge by Andy's aggressive Glaives and bowfire has knocked their unit down to half strength. Nonetheless, the way was now clear. 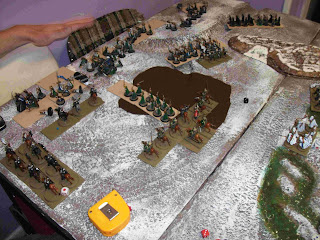 And any prepared Cavalry commander brings a spare. For turn five, Andy's Elves went first. They were so blocked in by all my units, that they were unable to avoid what was coming next. Thranduil at least entangled Elfwine's Knights (after his Nature's Wrath failed to cast). As many as the Elven bowmen were, they were not enough. The Glaives were hit by Elwine's Knights, Elphir led the spare Lancers back into the depleted unit of Longbow to his front, and the remnants of the Knights joined in. Faramir charged once more into the breach on the other flank. At this stage, it's worth reflecting on the fact that 'Terror' is a nice rule, but useless for all practical purposes vs a Gondor list. Faramir auto passes one test for free, Elphir (Isildur) is Inspring Leader with courage 6 and Elfwine (Erkenbrand) is 'Bold Beyond Belief'. The photo above tells vividly of the battle results. One unit of Longbow wiped out, Thranduil with them. Glaives down to two companies, Longbows down to two companies, and the remaining two company formation out there on the far flank. 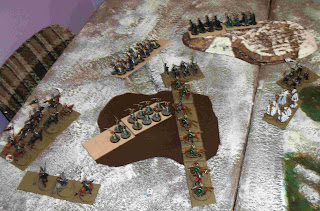 And here we are, turn six, I have priority and choose to go second. Andy is out of options at this point, so this is what I set up. Even my two one company bow units join the party, moving into close range of the enemy longbow, who intend to charge so will not shoot. Their bowfire was twice as effective against the Elves, due to the range. 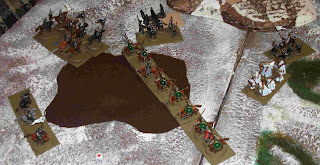 Here is the outcome of turn 6's combats. Five Elves remain in a single company of Longbow and Ithilien's massed Cavalry has swept the field.

I have a suggested rules change based on this game (I think Andy's force was well enough composed): Elven archers should gain the ability to ignore shields. That would put them back up in the top-tier of shooters where they belong, model their ability to pick weak spots on targets, and still give those units that paid a premium for high base defense the benifit of their statline. It is all the 25-35pt def 5(7) units that stymie them so much at the moment. My screen essentially negated Elven shooting. Losing the shields would double the rate of casualites.

Andy tells me he is building a Mordor army...

So I guess we could leave the rules as is and have players abandon the full variety of armies to gravitate towards the top-tier?
Email Post
Labels: Batrep Elves Ithilien WOTR