I love Christmas. The eldest pretends there is a real Santa, the next eldest still believes in Santa and the youngest actually seems to appreciate his presents, which is surprising for a 5 month old! More apposite to this blog though - Christmas time is new Wargame rules time. Last year I got SAGA, which I have had a lot of fun with. This year I finally got my Bolt Action rulebook (anyone see that news story about the container of books they 'found' on the docks at Auckland last week, that was my books) AND an extra Christmas bonus of Warlord's Pike and Shotte rules. This is another one where I (and one or two others) have had figs sitting around for a while but the project has languished. Pike and Shotte is more of a niche period (aside from Brits, who are die-hard English Civil War fans) but is the wargaming period that most captured my imagination when I read those old books on wargaming, as a kid. As I am not especially interested in the ECW (I can see why Brits are keen on it, but others?) it was always the much more significant (in terms of size and technical/tactical innovation) actions on the Continent that interested me. However, Warlord's game has it's own basing standard so this has reignited the "Basing Wars"!!! 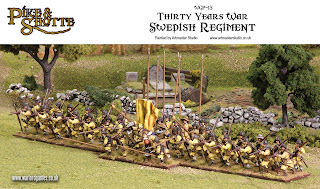 This is isn't the first set out by these guys, they have had a Horse and Musket set for AGES (Craig et al have been having fun with this), and more recently, their Ancients set 'Hail Caesar'. Before now, I have not been overly captivated by their approach given how the thick ladling of the designers' taste that comes through whenever they write about their games: Big lavish battles, on huge tables, too gentlemanly for such base concerns as consistent rules and - gasp - points systems! Since I am a gaming dad, that likes to play heaps of different things, and have limited time for my hobby (and think a lack of tight rules and points is more laziness in terms of a commercial product, aren't we paying them for their work?) their stuff didn't seem for me. Furthermore, I already had Impetvs for Ancients. If you are reading this and haven't had a look at those excellent rules, do so now! Somehow they are as grognardy as any FOG/DBx game and at, at once, as fun and fast flowing as one of Warlord's sets. In fact, I sorta have been waiting for the designer to bring out his Pike and Shotte set (Baroque Impetus) for ages. In the meantime, there has been nothing to spur me to paint up my cool 28mm P&S figures. Well now I have rules - in a book format that is frankly inspiring (there, that's my book review in two words) - and some figs. Now I just need to play. 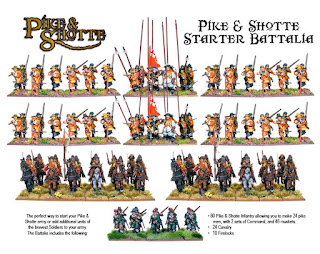 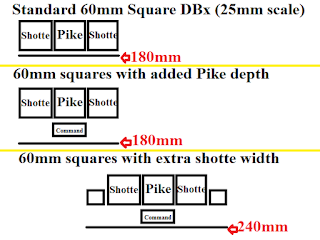 On a 6'x4' table, standard P&S frontages (320mm!!!) seems like it would cramp up the table far too much. The official minimums, a combined 240mm are far better. However, we have these traditional 60mm DBx style squares lying around. In fact I already have some based up on these. The potential Impetvs Baroque basing is likely to be 3x 60mm bases as per the top diagram. I think there are a few options here. Option 1 doesn't get us the minimum figs for either Pike or Shotte (not that this really matters but I would like to achieve this). Option two (Jason's idea) does for the Pike at 9 on the 60mm plus three - interchangeable - command on that extra strip at the front. I might do something like Option 3 and base the shotte sleeves 6 to a 60mm base with two extra figs on a small 30mm square base to extend it out, which get the total to the minimum frontage in the rules.... or maybe just 8 on a 40mm x 80mm base? 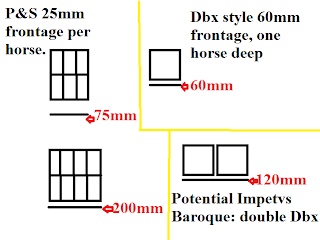 Looking at units of horse, I am more inclined to go with the Pike and Shotte standards over 60mm squares. 60mm squares are too small for 28mm horse models and you definitely need more depth, at the very least. The minimum unit is a mere 6 horse. However (shades of my other shots in the 'Basing Wars') I had tiny units of Horse. Adding two more horses gets a more impressive looking unit. I might just base horse on 25mm multiples as per the rules and can always add another two Cav models if I find minimum units too small. The option not pictured here might be to make 80mm x 100 mm horse bases (6 figs) and then I could potentially just add a 40mm base to the side and have a Baroque Impetvs base. Or just make 120mm x 100mm horse bases with 8 figures? However, I like writing about, playing, and reading about, Wargames more than painting so this may remain largely theoretical unless others paint up some opposing forces.