More Lasalle. This time the Frenchman wanted to command the British. We played Scenario 1: Les Avant-Gardes, from the rulebook. The armies were two balanced 250pt forces - the British loosely based on 5th Division during the 100 days and the French on 2nd Division of D’Erlon’s 1st Corps. Both sides have the job of either taking one or both of the towns and/or the bridge… or bloodying the opposing vanguard so much that it quit the field.  It’s my standard ADLG sized 120mm x 80cm mat with Warlord Epic scale figures on 30mm bases. To the left you see the British and to the right, my French. The British commander opted to put his Cavalry brigade and Landwehr in reserve and play with all seven line battalions  on table. I deployed my larger brigade, including the elite 13th Legere, the grand-battery and the 7th Hussars on table. Since we were all in March columm, there was no skirmishing and a simple dice-off to give me first turn.  The British clearly had a brigade aimed at either town, so
Post a Comment
Read more 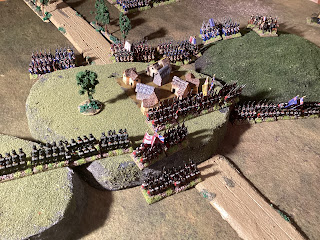 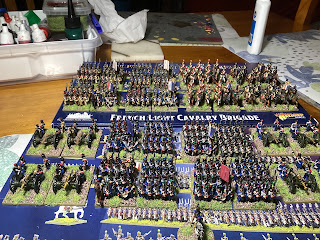