War of the Ring Batrep: The Red Fortress Ministry of Truth 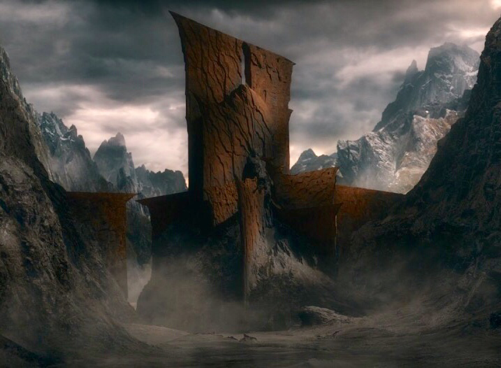 It’s been a while. But when Arnulf (famed war-correspondent from the Red Fortress Ministry off Truth) got in touch about hosting a Batrep, I quickly agreed. He’d brought along a pair of Nazgul, who kept wandering about picking up my models and looking at my TV while hissing to each other “nice stuff, shame if it were to get broken...” Cameras weren’t invented in the Third Age, so I had to get Andy over to stage a re-enactment using miniatures. He had 1200 points of Gondor led by the brothers Faramir and Boromir. Boromir has brought along the Veterans of Osgiliath while Faramir had some Rangers. The hard core of the army was a pair of Warrior, and a pair of Knight formations with a unit of Axemen of Lossarnach to give them a bit of punch. I had the Tainted and Dwimmlerlaik leading three formations of Carn Dum warriors and a formation of ghostly legion. We also had muscle on hand in the form of an armoured (Isengard) Troll. Fire support was a formation of Orc Archers and a pair of siege bows. The scenario was Field of Swords and Houserules were in effect. Wait, that Wraith is actually starting to drop things...I’ll let Arnulf take it from here: 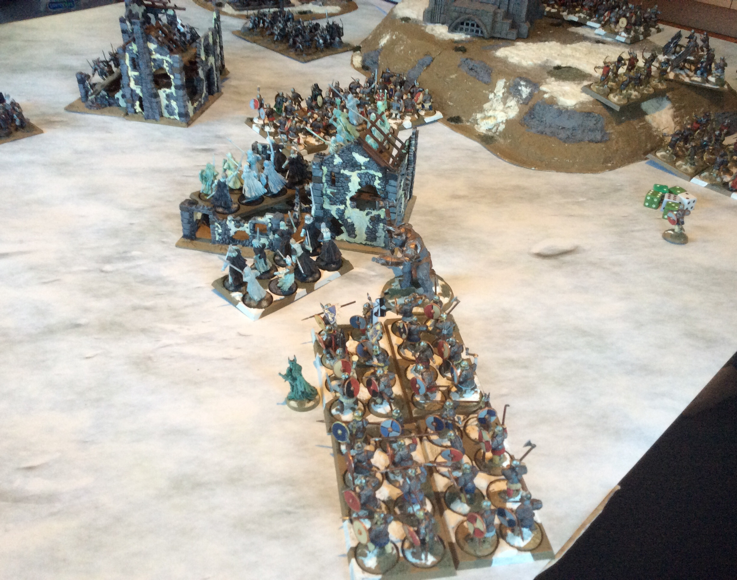 A spectre is haunting Arnor — the spectre of Morgoth-Sauronism. All the powers of the West have entered into a holy alliance to exorcise this spectre: Istari and High-King, Dwarf and Dalefolk, Elf Radicals and Hobbit police-spies. Where is the party in opposition that has not been decried as in league with the Dark Lord by its opponents in power? Where is the opposition that has not hurled back the branding reproach of The Witch King’s influence, against the more advanced opposition parties, as well as against its reactionary adversaries? They thought us defeated at Dagorlad but it is clear once more that all in the West once more acknowledge us as a power. Here in the snows of the North we peaceful pastoralists of Carn Dum were treacherously sneak-attacked by the Imperialist forces of Gondor. The Steward’s cretin sons (evidence of the Nepotism corrupting the old regime) have invaded our communes on under-utilised land in Arthedain. As a further crime, we heard from the Nazgul tthe Gondorians massacred, a unit of our brothers sent out on a foraging mission. Entirely coincidentally, we are fortunate the Nazgul found exactly their number in ghostly warriors to fill the resulting gap in the line. We will harry our enemy with artillery, then break the running-dog lackeys of the Valar on our shield wall. 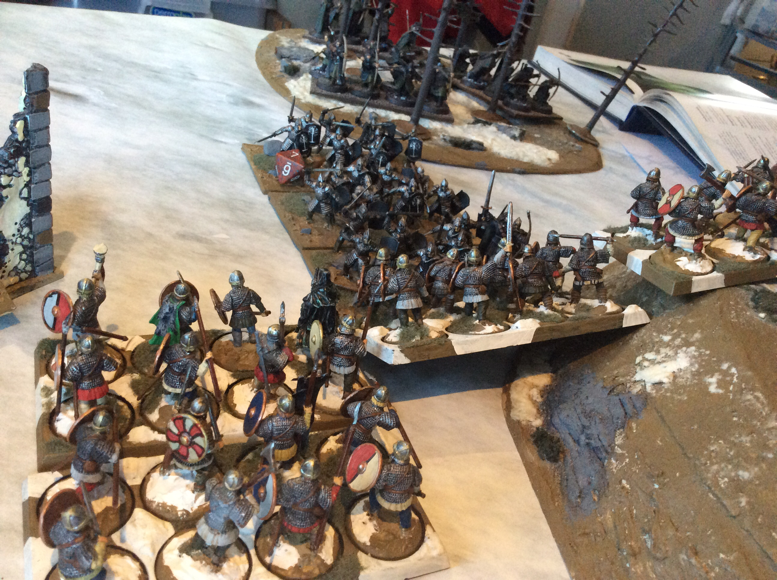 I have to say, the battlefield left a bit to be desired from my perspective. I quickly took my customary place up in the branches of a tree.... purely to better  see the events unfold.... only to realise the depredations of constant war had stripped all the foliage. If only the Arnorians wouldn’t keep making unprovoked attacks when we come to make more productive use of their land and property. Luckily, the nearby Gondorians were distracted by Ragnar charging his unit straight between some ruins and and the tower in the hill. He had the might to carry it through, and got off a solid charge to set the tone of the proceedings.. 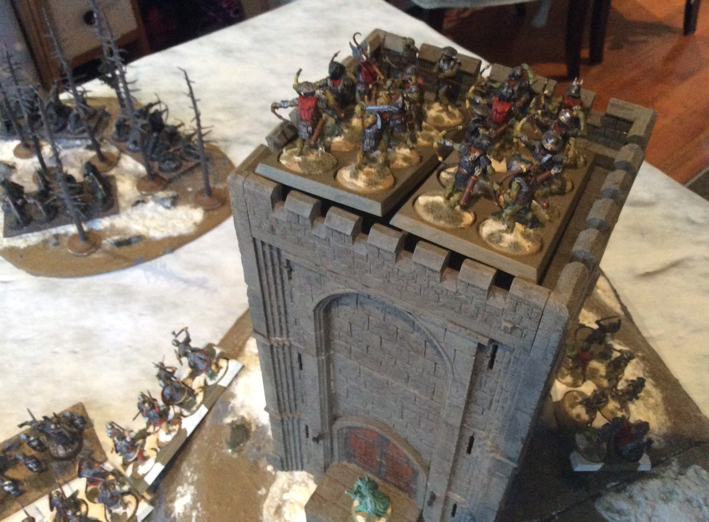 I would have preferred to observe from the vantage of that tower but the Gondorians left it un-watched for approximately a second and next thing you know a clan of Orcs had taken up residence. The Nazgul keep saying they are ‘helping’ but all they seems to offer is scattered bowfire, comic relief and me and the lads find it suspicious how they always have meat to eat without access to our stores nor livestock of their own... 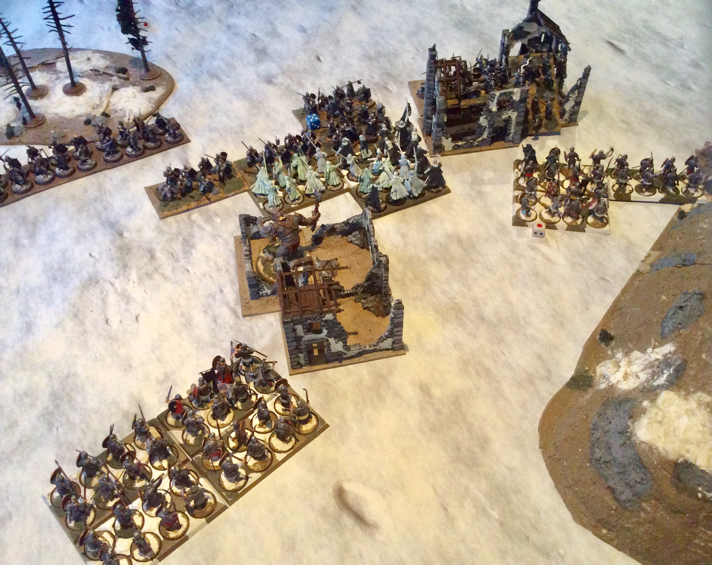 My uncomradely thoughts were interrupted by a piercing shriek from the Dwimmerlaik standing at the gate to the tower. At its command, our ghostly legion surged forward into the most elite troops of the craven Westron centre. The Axemen wouldn’t last long, even with Boromir to help them. Confident in the inevitable victory of scientific-Sauronism, our infallible Nazgul comrades elected to not commit the Troll to Guard their flank. 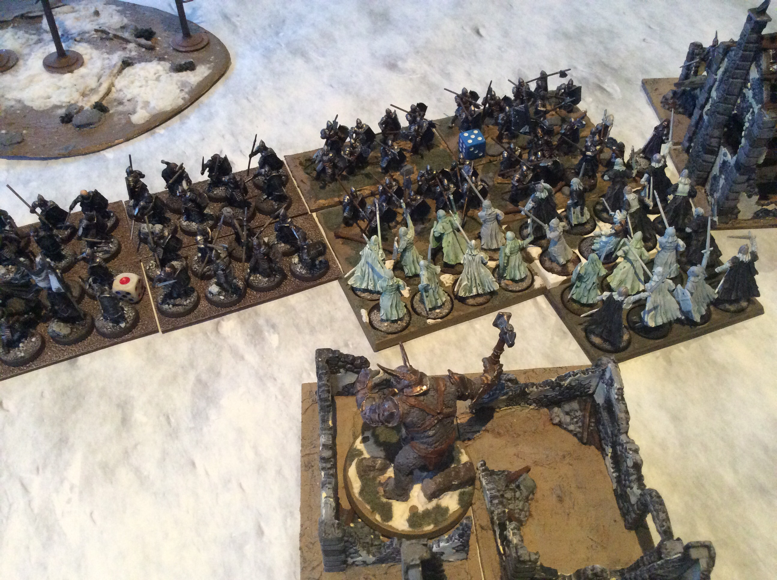 The wisdom of this course was quickly borne out by Cirion leading his 100% fearless veterans in to hit the Ghostly legion. Our undead comrades now have the entire enemy centre and their commander in chief exactly where they wanted them. 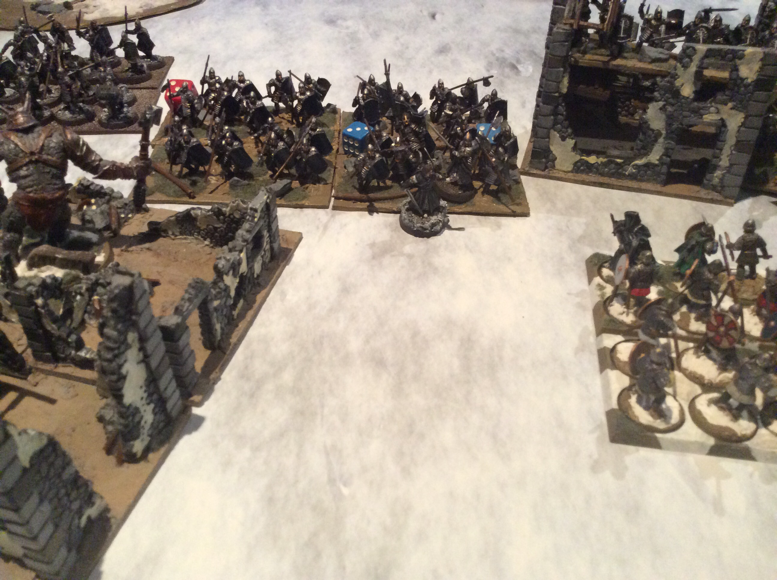 At this point I wondered irrelevantly if the ghosts still had families to send condolences home to. It’s hard to tell beneath the cowl, but the Nazgul, commonly known as the Tainted, seems to be glancing about daring anyone to question its decision making. Let the record show that despite these losses for no apparent gain (than slightly tiring the enemies’ sword arms) I remain unswerving in my support of the leadership committee. 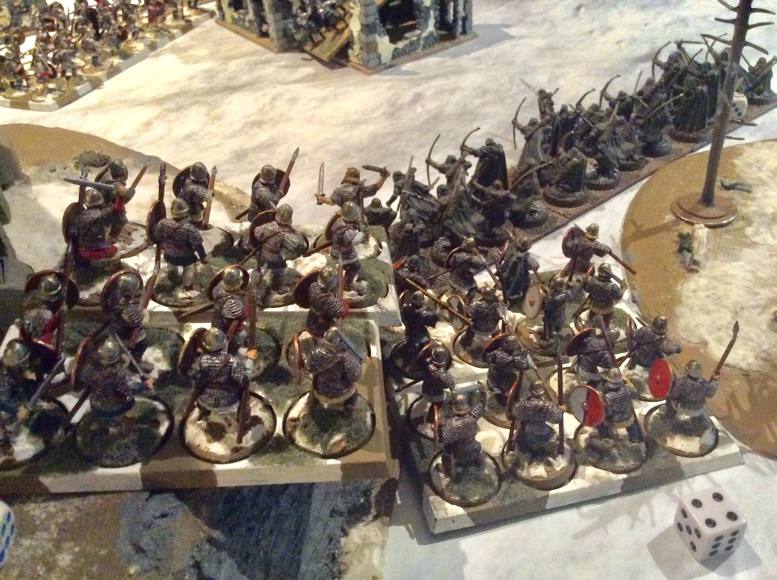 Meanwhile on the right flank, Bjorn heeded my frantic waving and did something about those Rangers who were causing safety concerns in my neighbourhood. It looks like they were preparing a pincer strike to capitalise on Boromir’s success in the centre. However, Faramir had grossly miscalculated. Bjorn’s entire formation slammed heavily into their flank. A little too heavily actually, as several warriors tripped and injured each other in the headlong rush. 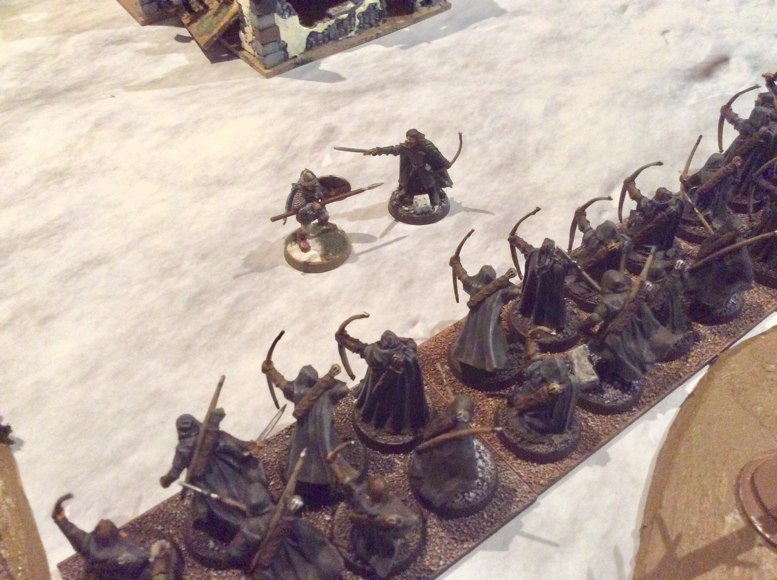 Faramir seems to have an odd deathwish, seeking personal combat no matter the odds. Comrade Bjorn is the equal of any soft-southerner but admittedly he was a little tired from his recent run and Faramir had some tricks on his side. The resulting draw in their personal combat was a more than honourable outcome and no stain to the reputation of our cause. Let’s not dwell overlong on trivialities like how the rest of Ragnar’s unit failed to inflict more than light casualties and the Rangers remained steadfast. 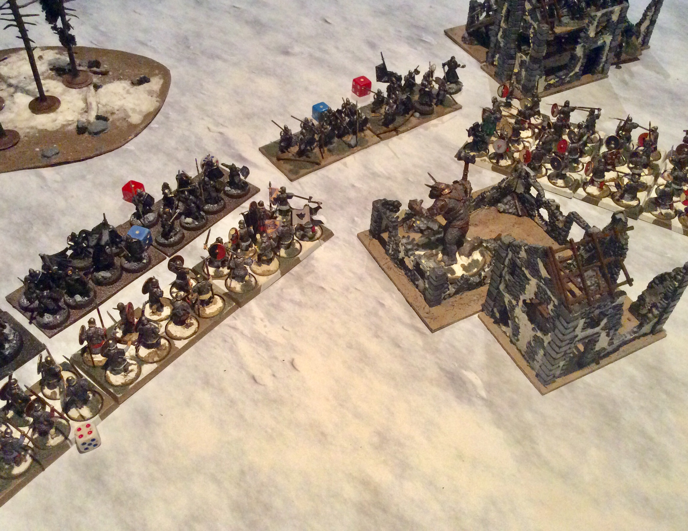 No instead witness the glorious advance of the revolutionary vanguard on the left and centre as we make ready for a charge on The Gondorians. Poor Boromir, so shamed at his little brother’s poor performance that, no matter his might, he couldn’t best the Tainted in single combat. For it’s part, the Nazgul was having a serious impact on the battle as it’s sorcery and terrifying presence kept all enemies at bay while it bagan to pick off enemy enemy units one at a time. Our cause is assured victory with such innovative tactics. Cirion, and his terror cheating ability, was left facing the locked shields and levelled spears of Sigurd’s boys. 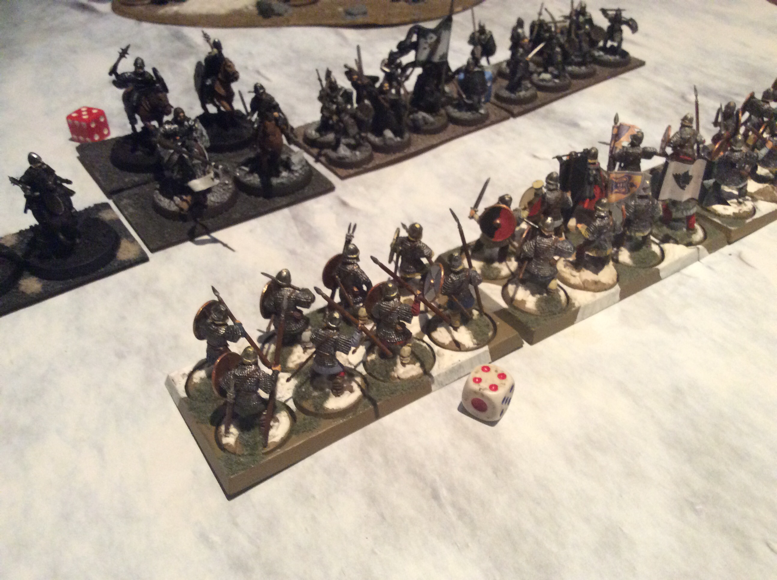 I have heard scurrilous lies that we almost suffered a combination charge by Cirion’s veterans and the remnants of the two Cavalry formations (the other meeting an accident involving siege bows). However, this was neither possible nor near statistical certainty but for blind luck on our part. Scientific-Sauronism has made luck obsolete. In related news, the other Nazgul had made his way from the tower down to Bjorn’s formation on the right flank. There he extended forward his finger of Death and the luckless Faramir had not the will of Iron to resist. Then the Dwimmerlaik rolled a 6 and killed the hero instantly. 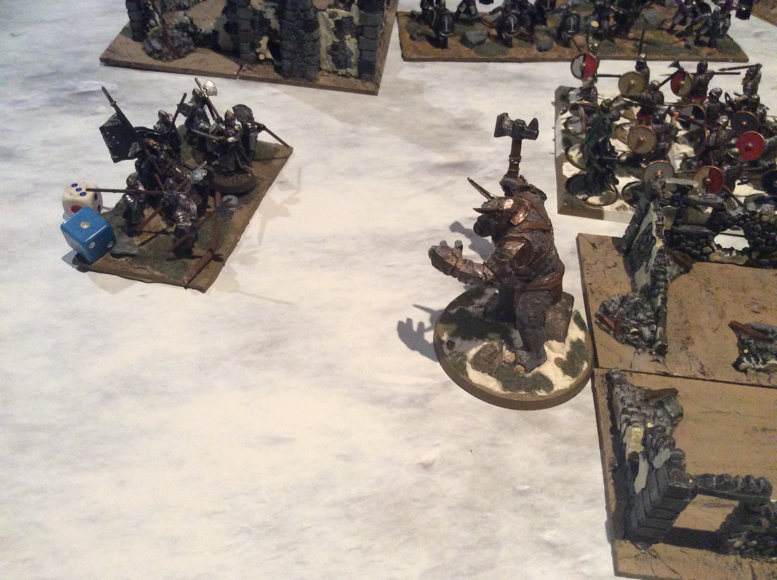 With Boromir fled in shame to the remnants of the Cavalry, our great armoured Troll strode forth and began to lob great chunks of rubble at the dregs of the Axemen of  Lossarnach. The Nazgul contemptuously turned aside from the has-beens and stared down the remaining full strength Gondorian formation. 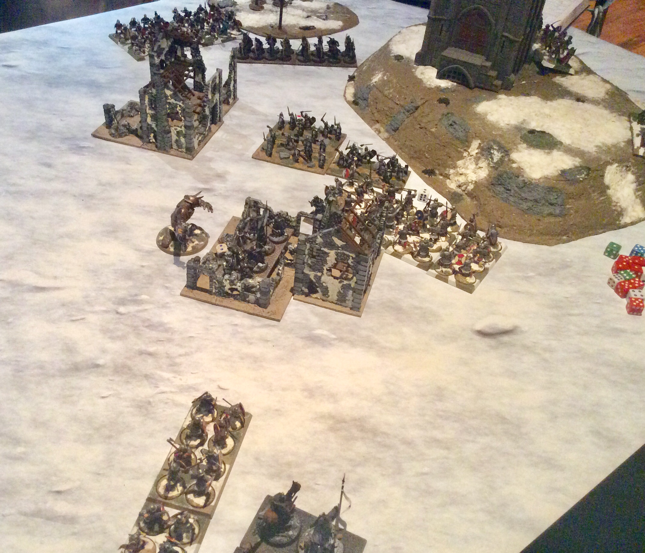 Next thing we knew comrade-Troll was bellowing in rage. Somehow, despite their army dying about them, Cirions carpet-baggers made stealing one of our houses their first priority. Sigurds men on the left were so incensed by this latest act of imperialist theft that they failed to notice a unit of running dog-lackey-horsemen sneak around their rear. 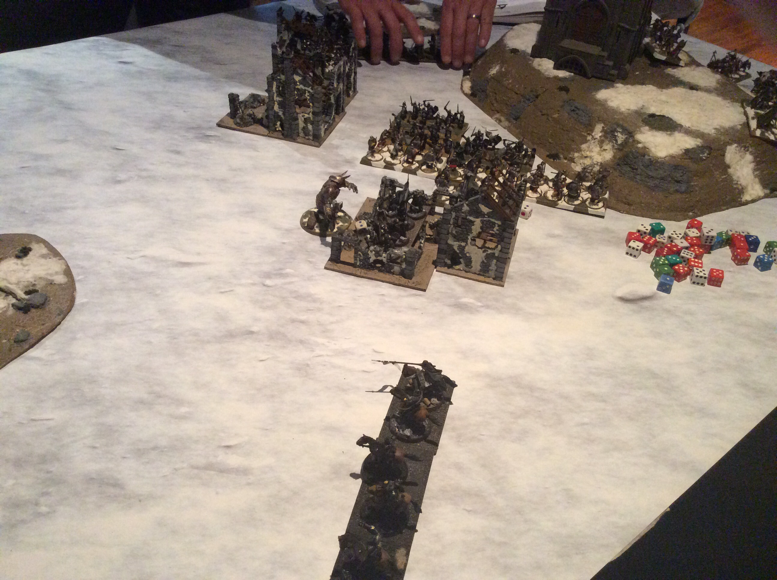 The loss of Sigurd’s men, heroes of the revolution all, cast a pall over our great victory. Bjorn and The Dwimmerlaik smashed the Rangers with a rear-charge while the Troll killed almost all of the remaining veterans. The tide of history is on our side comrades!

—————————————————————————————————
I’d forgotten how fun this game is. The ruleset itself is very clean and the statlines are pretty consistent. The only thing that used to marr it for us were some questionable choices for hero and rare unit abilities and pricing. We’ve fixed most of that up and also taken the opportunity to tweak things like some weapons, spells,  Spirits and non-hero Monsters. So a wider range of things seemed worthwhile. It was a big step out of my comfort zone playing with ghosts and without Thrydan the “king” of Carn Dum and Buhrdur but I think it’s going to be ok. It was also a challenge matching my terror causing force vs the Gndorian wall of high defence and ability to negate terror entirely for some units. I’d like to say I prevailed via pure skill but I never lost a duel, my killer spells somehow worked, and charges failed to hit me at critical times. I’m still,taking the victory though, thanks for the game Andy.
Email Post
Labels: Angmar Batrep Carn Dum Gondor WOTR WOTR Houserules Project