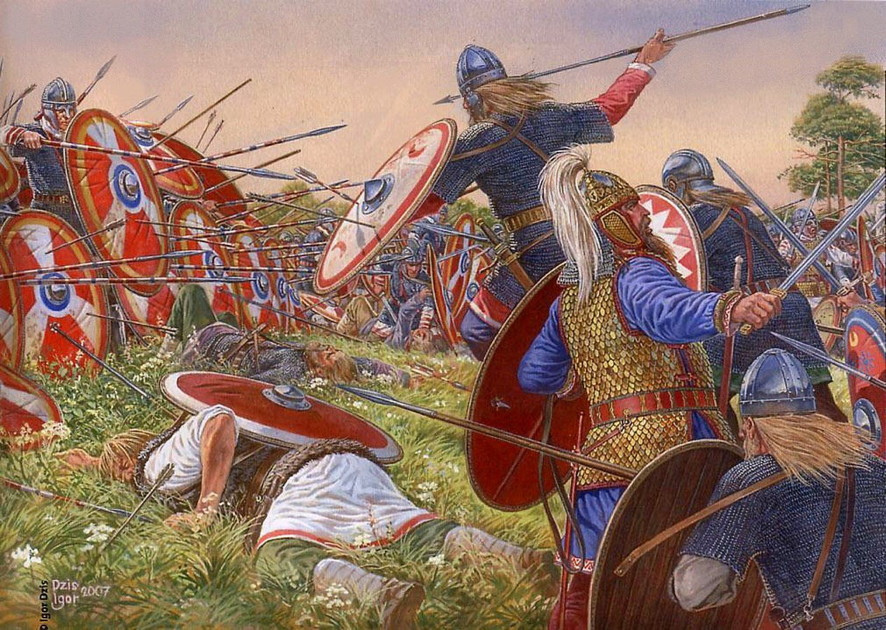 Impetvs seems to have, sadly, run its course. What killed it for me was the pages of amendments. However, I remain an Ancients gamer at heart. I started out with DBA but 12 thin strips, and some pieces of felt, on a coffee table didn't really capture the Epic Battle. I next gave Fields of Glory a go. Then I recovered. Once others went into remission, their searches for a replacement put me on to ADLG - The Art of War in French, thankfully translated into English. We played Impetvs in 28mm but I had these Late Romans/Arthurian in 15mm and Ben had these really nicely painted (except, inexplicably, the elites) Gauls. So I rebase a heap of guys on cool new 40mm squares, and we gave the game a crack at the reduced 100pt format. There were also pieces of felt but no coffee table. The battle was Epic in my imagination. 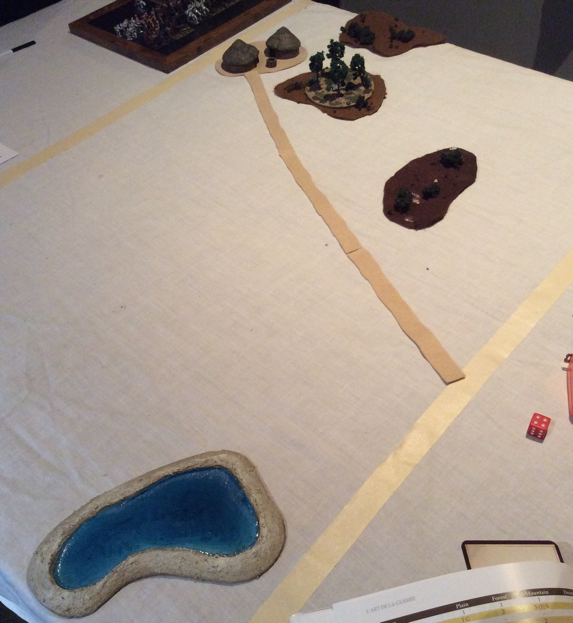 The mighty Late Romans at 100pts came two a unit of Heavy Cav, Cataphractii, two Equites Illyricanii (Jav Cav), an Elite and an ordinary Legion, three Auxilia, an Elite Auxilia and a mediocre one. And a unit of light infantry with bow. Ben had numerical superiority with a heavy warband line, a flanking force of three medium Cav, a light chariot and some medium warband on the other flank. Above is the fully randomised battlefield. I'm not sure what I think of this yet but it is a core DBx 'thing' so I better get used to it. At the top of the board is a village, recently despoiled by some Gallic squatters, The glorious legions were bringing OTT capital punishment, taxation, and indentured servitude to these savages. Not roads though, they had one already. Provincial Gaul, 427 AD. To the Magister Militim per Gallias I give greetings. At your order I have led this force to crush barbarians on the approach to Narbonesis. They style themselves Gauls but are no doubt some stripe of Goth, whipped like curs before the savage Huns out of the East. For all their uncouth ways, this battle will be a chancy thing. I see they outnumber us both in the line of battle and in their mounted forces. Our more flexible troops should have the advantage in the brush and forest to our right, so I plan to anchor my Legionary Comitatenses to the left and hope they give me space to pivot the line forward to the right.

We will have to teach these foolhardy barbarians more respect for Rome! They advanced swiftly toward us and their Cavalry closed down on our left flank. This was expected and both the most solid Legionaries and our cataphractii were there to hold them. However, the flanks are our weakness. If the horse to our left have to face the full force of the enemy mounted early, they may succumb. If they succumb, then the enemy could put the infantry line at a disadvantage. 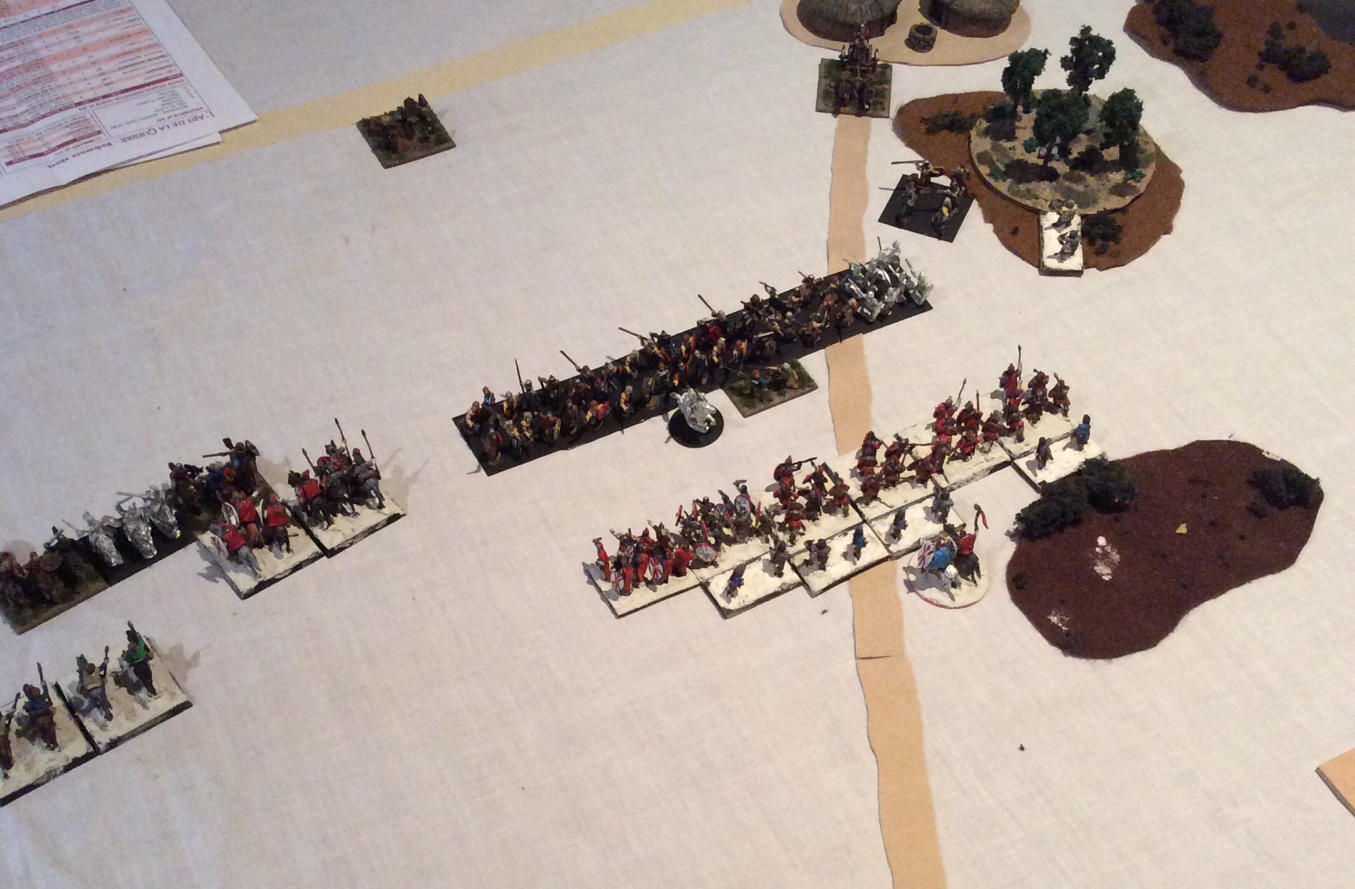 The light Cavalry did some damage with their javelins and our own Cavalry charged their line. Conscious of the presence of the Gallic foot line nearby, the Cataphractii kept themselves disengaged from combat and confined themselves to harrying the end of the enemy line. Meanwhile, a small band of brave, or perhaps foolhardy, Archers commenced with their assigned role of baiting the enemy medium foot. They couldn't resist chasing our skirmishers down and so shortened the Gallic main line further. 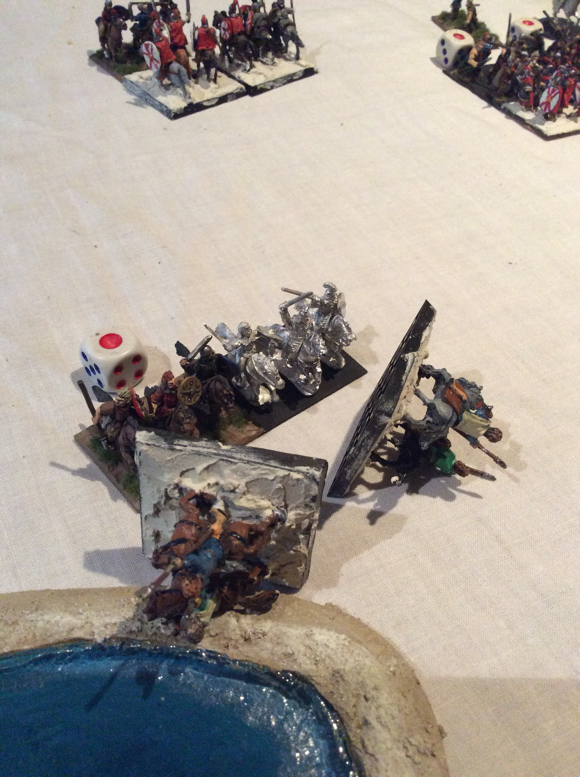 No doubt feeling the need to work out some of their frustration, the bulk of the barbarian cavalry abandoned their fellows and rode down our light horse, scattering them instantly (ok rules fail there...) I saw the men riding off in all directions. They may be out of the fight but due to the enemy's rashness they have turned our numerical disadvantage into a local advantage in the Cavalry battle... 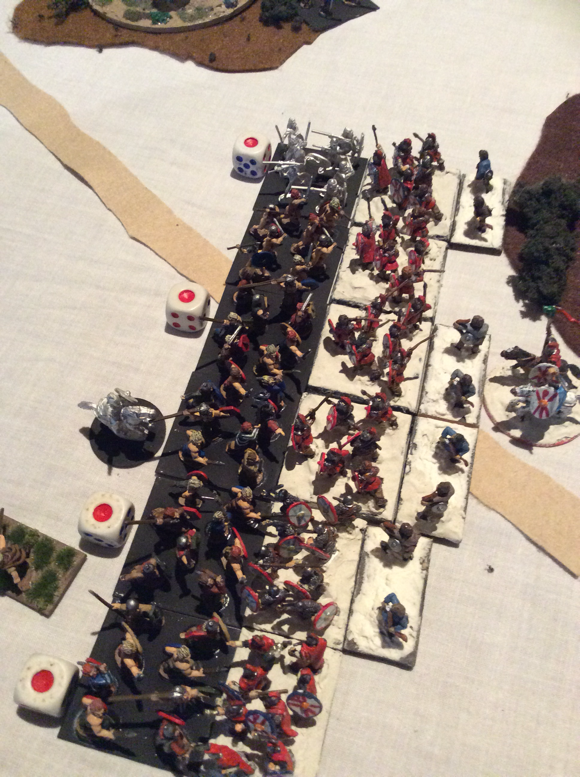 With loud yells to their pagan gods, the barbarians crashed into our main line. They were met with a hail of arrows from the supporting archers, then plumbata hurled by our swordsmen. Wading through the snow, and peppered by missiles, the enemy infantry assault began to break up. Roman blades quickly exploited the gaps and slew our enemies right up the line. 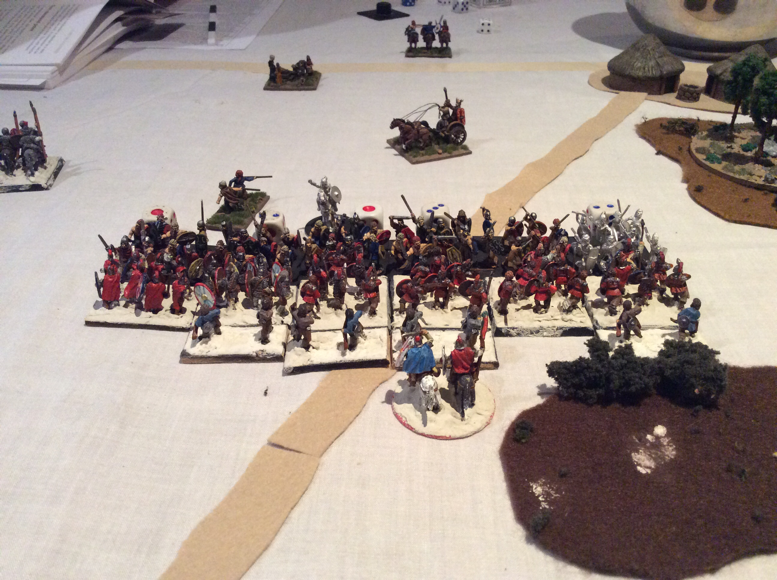 The infantry now engaged, it looked like the advantage was with us. The risk here was that barbarian chariot could link up with the returning Cavalry and turn around their losing battle to the left. Fortuna was with us once again however. Over the din of the dying and the cries of our brave men, the Gallic general struggled to relay his orders to the scattered parts of his army. We on the other hand, were right where we needed to be. 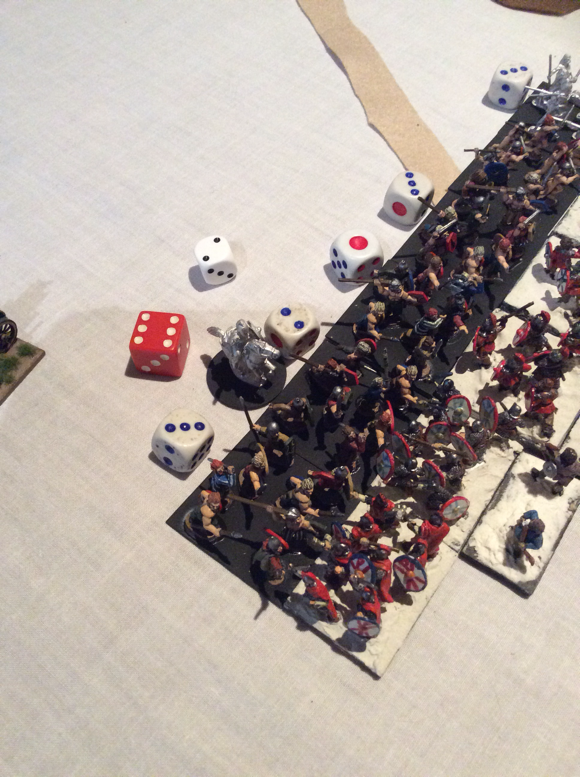 That place was in the line of battle breaking the 'Gauls'. Over the clamour of melee, it was apparent to me that my opponent had succeeded in getting across his chariots. However, my Cataphractii and Equites has slain a unit of his horse. My own mounted troops were well armoured and could be relied on to hold out just a little linger, even despite the arrival of the rest of the Gallic horse in that scuffle on the left. The enemy general clearly saw it all slipping away and waded in personally to attempt to bolster and rally his troops. Seeing our opening, we pressed harder, smashed the men around him and slew him as they routed! 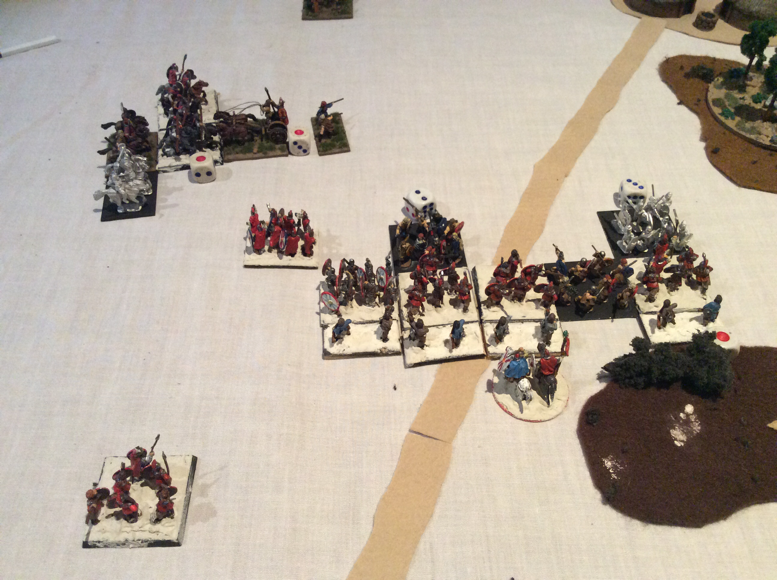 The barbarians did not give up, even without their leader. Some of them even slew a unit of our Auxilia. However, with over half their line butchered, broken or scattered, their army was in tatters. The enemy Cavalry charged my Cataphractii in the rear but those tough troops held, despite the casualties caused. Even as my Elite Legionaries prepared to turn the flank of the infantry fight, the 'Gauls' finally admitted defeat and attempted to flee. Roma Victor!

---------
Thanks for the tough fight Ben. I was really apprehensive at the start of the battle as my feeling was the infantry battle favoured the Gauls due to their wider front. The horse battle too was three bases of fighting Gauls vs two bases of fighting Romans. Mine were better but if that fight went badly, the whole battle might follow. Then I ended up getting to gang up on one Cav unit.... and I was totally gifted the infantry fight when Ben somehow couldn't roll the dice to beat a single infantry unit. Even my mediocre troops without missile support somehow drew vs the furiously charging barbarians. Best of all, the pressure on that fight was all gone as the infantry flankers to my right had allowed themselves to be drawn off at the same time as the Cavalry pressure lessened to the left. Even if the initial contact had been more even in the middle, my quality troops could grind it out as long as there was no interference from the flank.

From what I can see, I like this game a lot. It reminds me a lot of Impetvs. Movement is quite free-flowing (by ancients standards), dice resolution is quick, and units have hit points and are degraded once no longer 'Fresh'. There are a lot of first round of combat related abilities so it still feels like a game of manoeuvre to get good hits in. It is more a game of securing the right matchups than Impetvs was but with the amendments Impetvs was also increasingly converging on that approach. If you have the command points, each space can move independently so there is the opportunity for exploiting opportunities in a way that FOG BGs or even Impetvs big-bases could hinder. We were playing the 100pt reduced format. A standard 200pt game would have three commands and more command points to go around. It will be interesting to see what this allows in terms of managing multiple groups and especially Cavalry.

Best endorsement is that though I already have the army of Late Romans in more than sufficient numbers (less figs required than FOG), I've just ordered two dozen more Alan Cavalry. They will be Foederati / allies / the basis of future Alan or Sarmatian army. I just need to see what can be done about terrain...