Sub Sector Christus Ecclessia: The Harrowing of the World Eaters.

+++7.795.005.M31
Cruxis Majoris Ultima: A baleful red giant. The only Imperial presence, several science and monitoring colonies on what were little more than half lit snowballs. They tumbled in the void, the only toehold possible, as close as safe to the deadly irradiated star. Unremarkable, and until now unremarked. Their only claim to any worthiness of mention,  the recent discovery of what appeared to be traces of explorers.... from the dark age of technology. A discovery beamed triumphantly to the Warmaster's personal Astropaths. Then the accidents happened, and station after station seemed to go quiet, or fall victim to a freak explosion or critical life support failure or meteorite impact. Some of the scientists reported that silent black sillouetes had been spotted on visual scopes. Big enough to be ships...but surely not Imperial? No hail had been given and no aid rendered in response to their pleas. Xenos? The descendants of humans from nearby Sub-Sector Christus Ecclessia? Among the the watchers, a few knew the truth. They were "Imperial" alright. Astartes, Angels of Death.

+++Interlude: This was the Shadow Wars Suicide Mission. 2250 pts Alpha Legion vs World Eaters. Alpharius led the defence and the bonus/penalty of the Legions, combined with recon, and the super-heavy penalty turned the World Eaters winning 11 v 5 roll off into a tie. Then Alpha Legion won the tie breaker and chose to defend. This means they get 2 VPS per enemy unit and World Eaters get 1VP at the end of each turn per scoring unit that actually had boots on the ground. We'll see how that plays out. Since this took place before the weekend the score sheet went up, I guess this is prologue for the local Sub-Sector Christus Ecclessia campaign.
+++For the Emperor 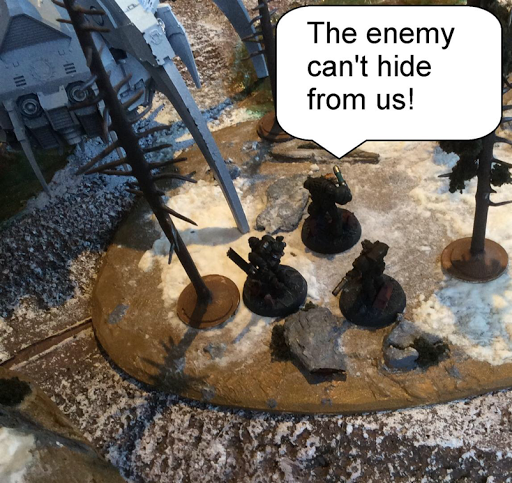 +++Crucis Majoris Ultima 654
+++Imperium Science outpost Sigma
Perimeter Recon has detected an incursion at the perimeter line. It's finally happening! Fell and brutal war machines drop from the sky, and rumble over the tundra toward us. We are prepared. Astartes of an unmarked Legion have been in contact for well over a Terran standard year, readying us, recruiting from among us. For the Emperor. But also for a new dawn for humanity, new opportunities, a revolution in human potential. They have promised us great things. We see them now, armoured in gleaming blue ceramite.Ready to oppose the enemy in force. Outside the base, more of them, in blackened armour, shadow the approach of the brutal looking flyer. 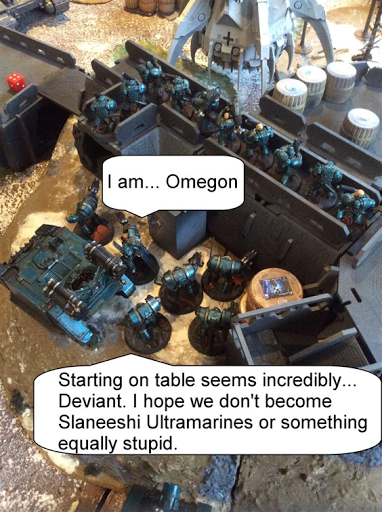 We can see the rest of the Astartes gathering on the opposite side of the science station. They look few, about a score if the recon are included, and who knows if they are Astartes or more operatives like us? They have also revealed a hidden cache of armour, a vicious Vindicator pattern siege tank, Scorpius pattern multiple rocket launcher, and there it is.... we all cheer to see the mighty azure armoured dreadnought stomping round the corner. 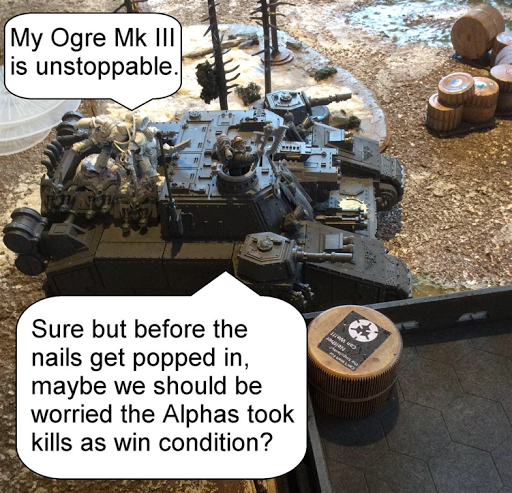 It seems so little against the behemoth crawling over the ground and the bloated flyer above. Who even are they? We over-hear fragments of conversations between an Astartes stationed just outside and some others elsewhere:...Comms intercept in place on World Eater local command....Scrambling objective matrix...Standard parameter: Maximum attrition..... Substituted parameter: Immediate storm of enemy position. World Eaters? They may be butchers but why would we be under attack by Astartes? What in the Emperors name is going on? 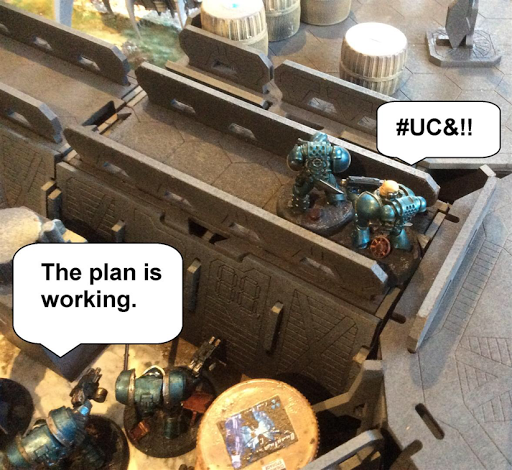 Overhead, we could hear the tearing sound of rapid fire shells striking railings, walls, and armoured Astartes. Cold dread gripped us as several of the blue Legionaries tumbled, lifeless from the roof. I could hear no more of their Comms chatter due to the din of battle, and the faces of their helms gave nothing away. Who were these Astartes among us? How could so few of them stand against the infamous World Eaters? And why was this happening? Had we thrown our lot in with traitors? When the rest of the meagre blue Legionaries fell, could we at least look forward to the mercy of a swift death? 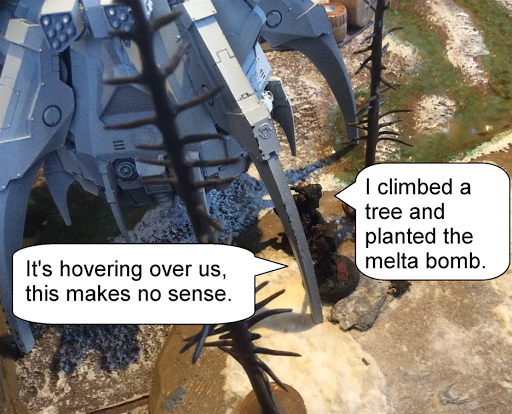 On the other side of our station, the black clad figures were not standing idly by as their confederates fell. They managed to somehow surprise the flying metal maw with what we have been taught are melta bombs. Our trainer, one Alpharius, told us how he had once downed a mighty using only those deadly devices. Whoever led those figures struggling vainly in the shadowed trees, he was no Alpharius. 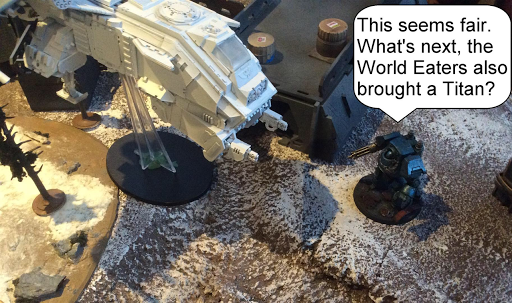 Then with a scream and a backblast so bright we had to turn and shield our eyes, another flying transport arrived. This one was clearly Astartes in pattern and looked over the Dreadnought guarding that flank. I felt the knot of cold panic in my gut. Two flyers and a super heavy tank... reported to be carrying the World Eaters against some our light armour and half a score of infantry. Surely there was only one way this could end now? There could be no preparation, no strategy that balances those odds. 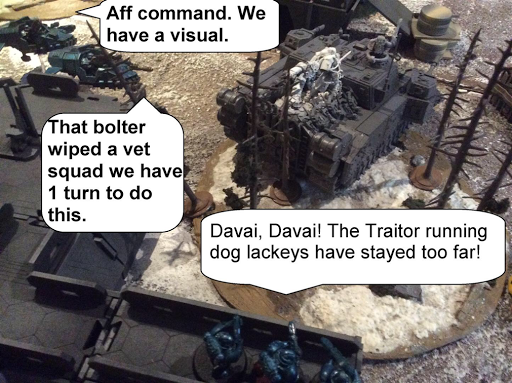 Then out of nowhere there was more light armour, and nimble two-man flyers dropping from the sky. As soon as the legionary ground-vehicle arrived, it's well oiled doors slid open, and ten more power armoured Astartes disgorged. I saw the precise enfilading fire from two directions. 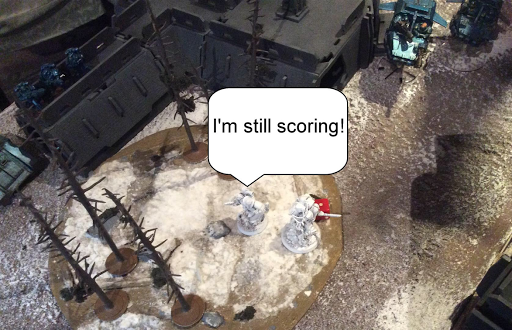 Next thing I knew white light, heard only ringing, then momentary blackness. When I came to, that super-heavy tank was gone. The trees around it were blackened or felled entirely, and only two white armoured figures staggered from the wreckage. 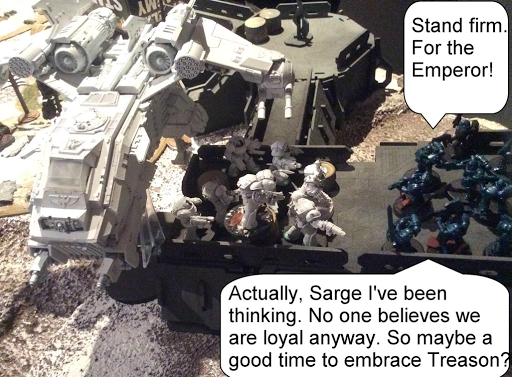 I couldn't hear a thing anymore, but I could see a second white, and unmarked, flyer set down next to another squad of our blue armoured protectors. I felt I was cheering our Astartes on but couldn't hear myself. No matter, cheers dried up quickly in my throat as I saw the bulky white shapes first gun down, then butcher, the blue warriors at close quarters. It was so quick, then the bulky white shapes boarded their flyer once more... was this building next? 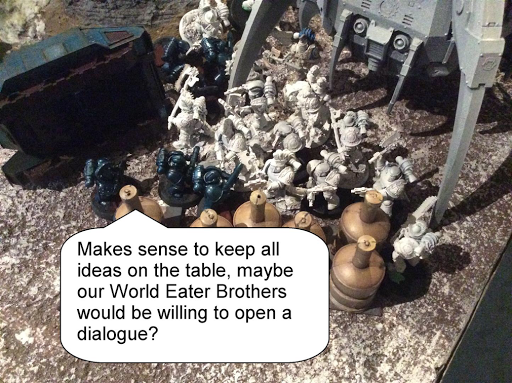 My hearing came back, first the ringing swelled, then the sounds,of the booming explosions echoed all around. I rushed to the Windows at the other side of our station . The blue tanks were all burning wrecks. Another squad of the Loyal Astartes had debussed from a transport, seconds before it to exploded from a direct missile hit. Then the bulbous White clawed flyer set down and vomited forth over a score more white-armoured warriors. I could hear my cheers now as a couple of them went down to determined plasma fire before they had even got their footing. 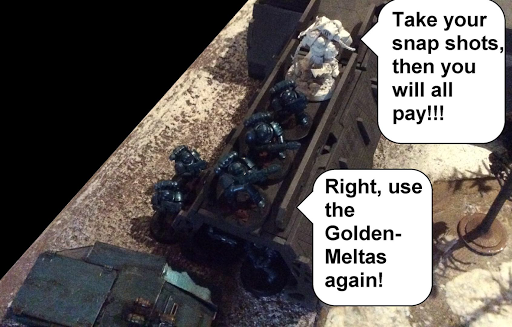 Just past the smoking crater left by the super-heavy, I could see one of the two maggot-white survivors had triggered his jump-pack. He was ready to cleave his way through the left flank, when he was cut down by hip fired melts-guns. Then that squad of loyalists boarded their transport once more, on the hunt once more. 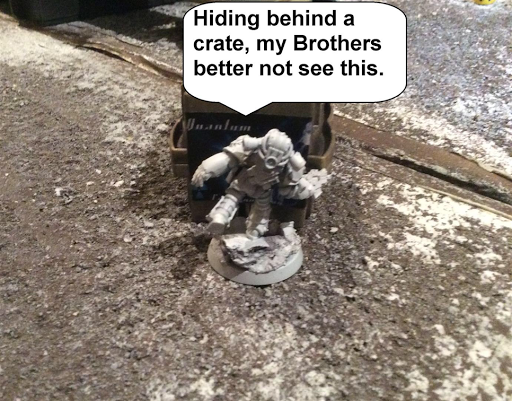 And went stalking the sole refugee from their pitiless onslaught. His hiding place had brought him a small victory, as he managed to eluded our Astartes for a time. Until they brought unto him the mercy of angels. 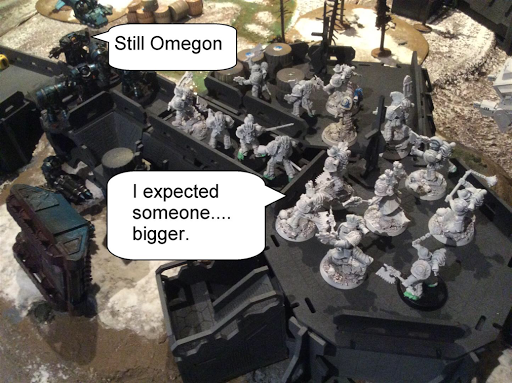 Above, dust fell from the ceiling as the Astartes commander and his blue clad terminator entourage climbed the roof. Facing them, over four times their number of half-mad, white clad savages. No that's not right, I see they were red now with the blood of brother Astartes. With a howl they joined battle and the Loyalist leader, one of the Alpharius', dueled the sergeant leading the white World Eaters. 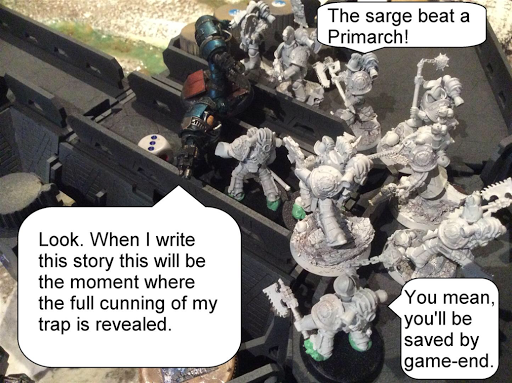 Somehow, that sergeant lived, fending off blow after blow from the serpentine two-bladed spear. And the melee itself seemed drawn, teterring either way. It was so gripping I didn't even realise there were new contacts not the scope. Two wings of Loyalist strike craft on low approach, ready to catch the enemy transports if they tarried to long. I wouldn't credit it, but somehow the World Eaters had the sense to let it end. They left their dead on the frozen ground, their objectives un-taken, and ceded the battleground.

I turn from my cheering friends to find myself facing the barrel of a gun. I look up... it's wielder looms over me. The last worlds I ever hear are "...for the Emperor."