Fantasy Renaissance: One year on 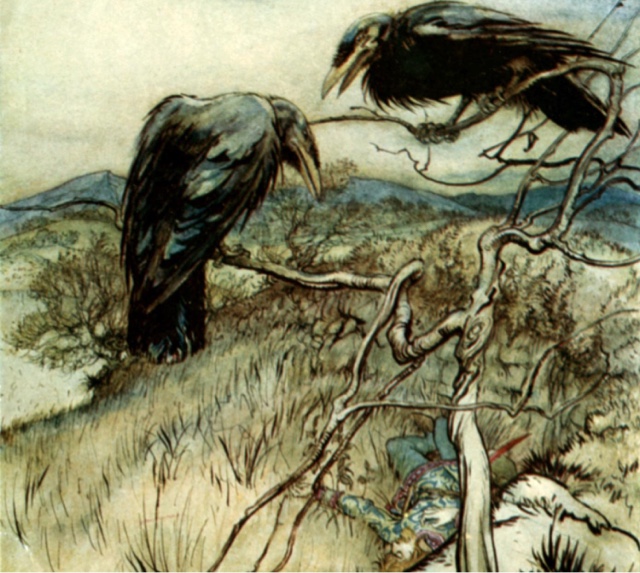 It's a bit over one year on now, since Warhammer Fantasy ended as an official thing. Games Workshop then relaunched a purportedly skirmish scaled game, Age of Sigmar. Immediately the crows then gathered over the slain hero - Warhammer Fantasy Battles. Initially, I could see quite a few contenders. However, I'd suggest two games in effectively open public beta have gone the distance. I mean, Kings of War is still there. However it is in desperate need of an Apostle Paul to rework what often looks like a bit of a narrow cult for the mass consumption (we are all ok with religious history analogies right? After all my 11 year old's favourite series of YouTube histories even does it https://youtu.be/E1ZZeCDGHJE ) Until that occurs, I'd say those who really want a company supported game, first and foremost, are getting more and more what they want via major changes to Age of Sigmar, proving it more of a Beta than a monolithic edition release. Those whose care not for an official imprimatur for their gaming, have Fantasy Battles: The 9th Age. Sure it also claims its full 1.0 release but there will be changes and like Age of Sigmar, this is a feature, not a bug. Edit: And in timely breaking news: Fantasy Flight Games now have a ranked battle Wargame. Title is Runewars: The Miniatures Game, and it's NOT preprinted. Looks interesting in that the movement trays are making me nostalgic for WOTR. I'm sure square based models can be saboted for it though. So two companies and a challenger emerges... 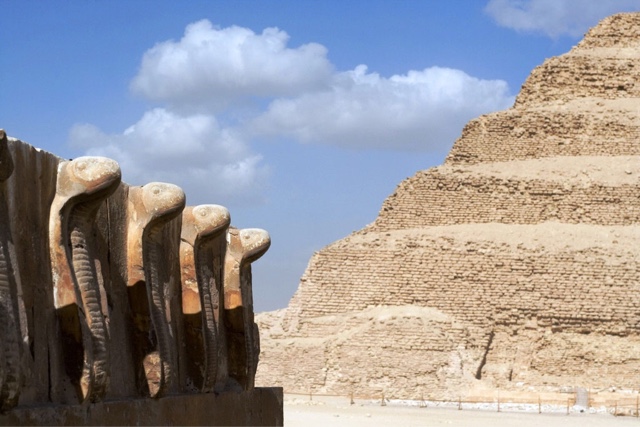 The other contenders are there... But we've seen a recent rush for everyone but Mantic to tuck their alternate rules away in the background and instead take up the offered opportunity to promote their stuff as compatible with a single set of fan-directed rules. A set, that for the moment, looks more and more stable and supported by tournaments and miniatures options. We've seen the model of a loose (but coordinated) network of fans/players and supporting companies do very well with other former GW games. Here again this seems to be the case. Sure the future is uncertain but given that we've now seen the weaknesses of relying on official company support, some attention can be given to the advantages of networks as a form of organistion over a single company hierarchy. But I'm not going off on that tangent today. Today I'm just want to share my new army project: Anatani. 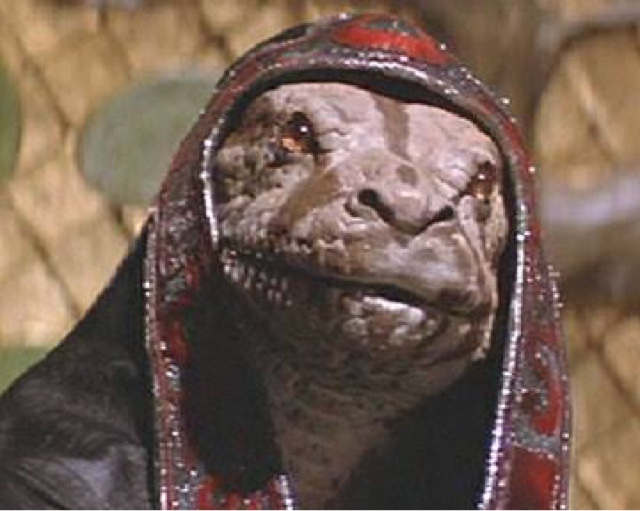 Ok clearly that needs some expanding. I'm not a big GW Fantasy guy. Since my tastes always ran to more 'swords and sorcery' than D&D style magic charged Fantasy, I do have some appreciation of the grittier and Morcock inspired early versions of that world but I don't think their overwrought and cartoonish current depictions will ever work for me. Of course, this will also be another Fantasy army that might be used in under a range of rule-sets. Who the heck are the Anatani though? Well they are the Repilian Vanguard of a set of pretty grim and pitiless elder gods. 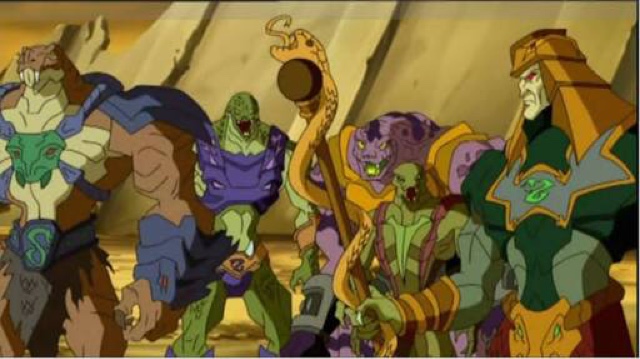 It's actually a pretty common theme and I'm sure my exposure when a kid to the likes of the Conan, Thundercats, and He-Man cartoons (probably written by guys who like the same Sword and Sorcery stuff I do) no doubt cemented the idea in my head that these Lizard men are A. not the good guys and B. Basically working on a way to bring about something even worse, but that we can't fully comprehend the awfulness of. 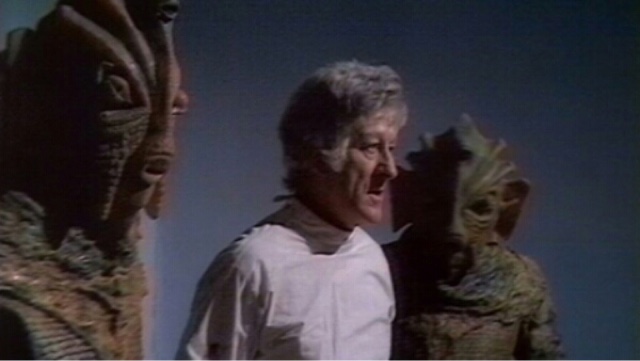 Heck, even good old Dr who had a race (or two, the ideas get recycled) of Repilians from the past that are going to bring about something cataclysmic if not stopped. 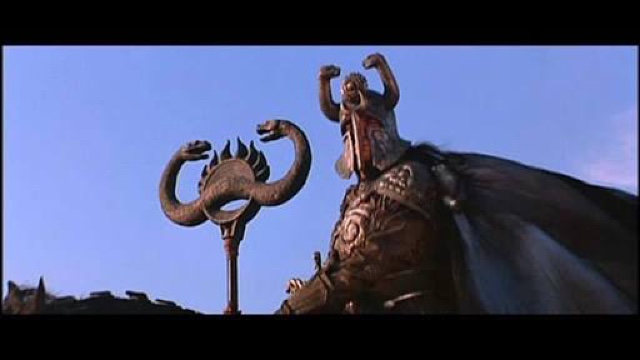 These days, I'd say that Conan (by Robert E Howard) is universally well known, and the example of the Sword and Sorcery genre we can all relate to. What will be a little less well known is that the Lovecraft and he basically shared what is now known as the 'Cthulu Mythos' as a shared conception of exactly what lurks just outside our immediate reality, and how pitiless, and hostile to humanity, godlike beings can be. That's right, the serpent men of Stygia and of Valuria worshipped a great Old one. Per the picture of Egyptian snake gods above.... I think maybe we have ancestral memories of these dark gods as well? No doubt even many misguided human beings come, willingly or not, to worship and aid their Reptilian Overlords? 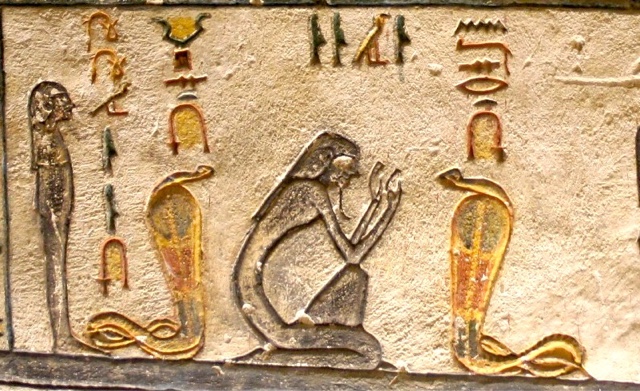 Now, Games Workshop had Lizard men men but they were good guys and frankly the whole dinosaur riding thing is a bit boring to me. The Anatani were from a D&D world I made up ages ago and were the key adversaries for the player characters. 9th Age has a Lizardman list but they just don't work... But they also have a Warriors of the Dark gods list. Seems perfect. 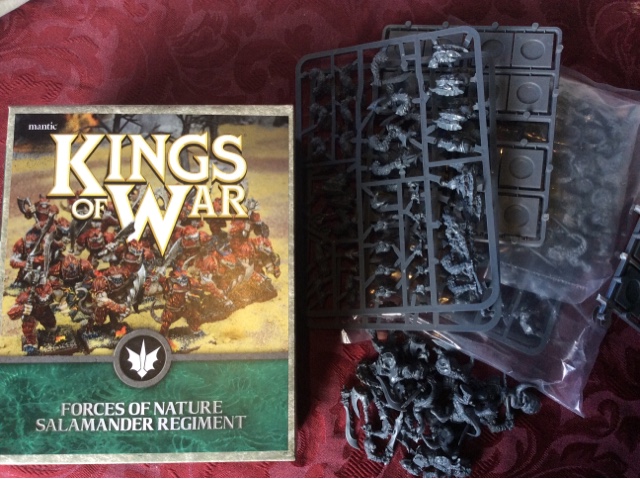 And look what arrived in the mail for me just a couple of days ago? Less per box than I originally thought but should be just enough. I've been waiting for plastic Lizardmen for aaaages and these do not disappoint. Reasonably priced HIPS models and readily available from my usual shops. Mine got here from good old Caliver Books courtesy of the Brexit discount. 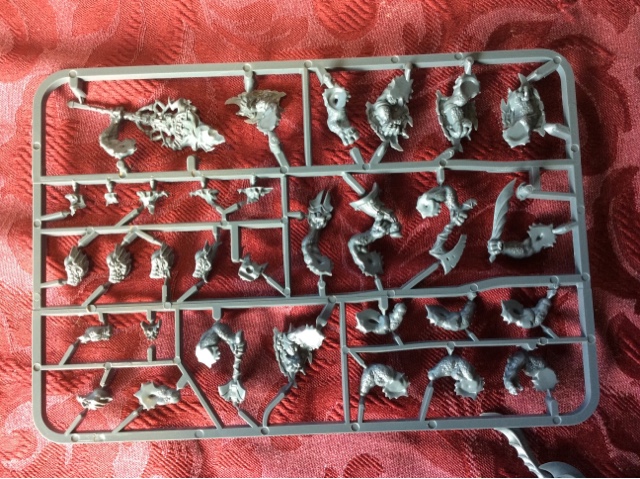 They are basically this one sprue plus some bodies and two handed weapons arms. You and do them also all sword n board or two handed. 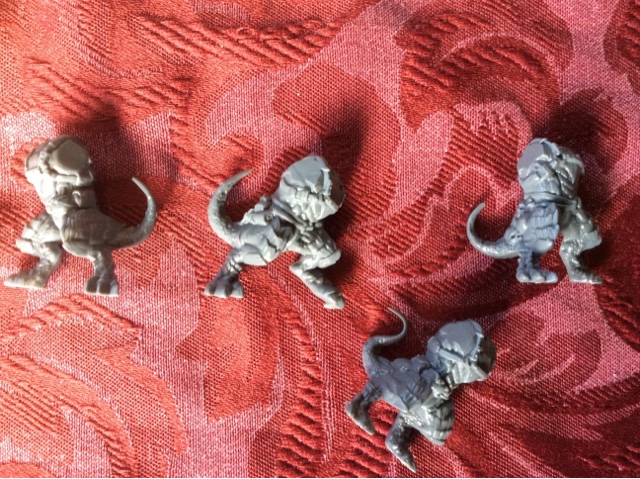 Not a great variety of bodies. I think there is actually a fifth body that I didn't realise baca use its only slightly different. However, these are in my preferred style: one piece legs and torso with head and arm options. I just want to build an army, no endlessly fiddle about with lots of pieces. So I got these all stuck to their base on no time. They are meant for 25mm squares and I've done most of mine on that, with a few on 50mm squares, for maximum compatibility. 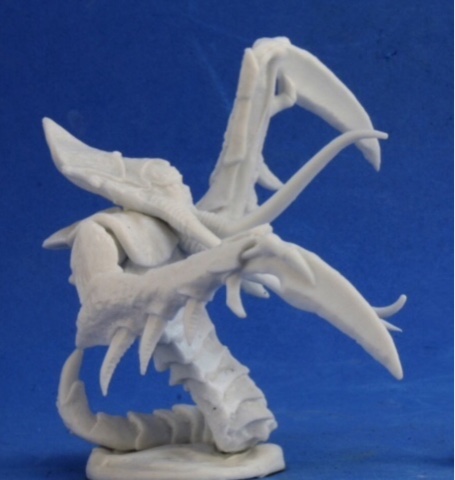 The plan is to make heavy use of Reaper Bones Bathalians (handily available through Mightyape) for monstrous cavalry and also some characters. The Warriors of the Dark Gods list features elite infantry led by very tough heroes as its core. I think that the Bathalians, with their three variants, will also be perfect for a character mounted on the likes of a demonic steed as in 9th Age these are a combined profile anyway. It makes sense to me that my evil reptiles will often have the evil lieutenants of elder gods in their ranks. It fits the theme of the Anatani as I've always pictured them (an PCs often encountered them ) perfectly. There was always some demonic monstrosity there when you thought you'd overcome the reptilian hordes. 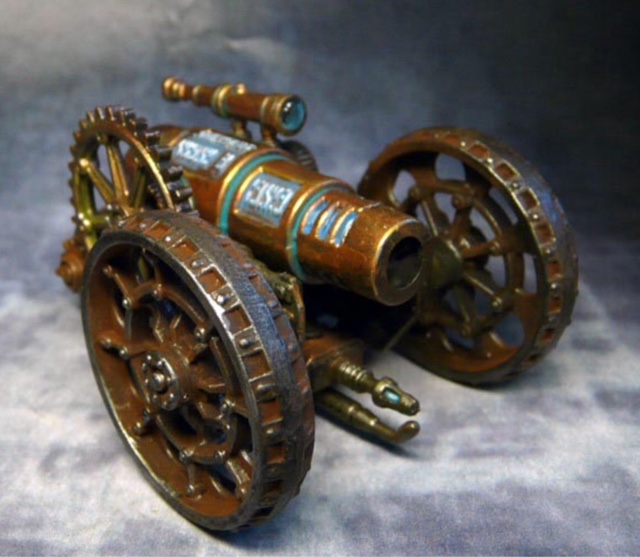 The list has demonic artillery as the sole shooting weapon. A Book of War list (forthcoming lol) would totally feature the Kobold gunners, vicious blunderbusses, boobytraps, and all, that often were in the thick of hatching some fiendish plan. I'd always seen the Kobolds as something akin to Motie Watchmakers. At least in this Fantasy project, a couple of pieces of their artillery can be there.

I'm keen to get to work on them. A cheap buy, about $100 to get all the stuff new without facing about with eBay etc and should be highly portable compared to my Humans. Not that I don't like the Humans. No doubt the Impetus of this new tangent was the Cardinal Palntine leading a full 2500 pt list vs some perfidious undead. His Knight commander led a glorious charge on the left flank and put the Vampire plan in chaos. He even slew one of them in single combat and all we totally lost was the militia pikemen. I mean, 9th Age is still very much bound to the old Warhammer rules concepts, and I'd absolutely do things differently, but it is pretty fun.

So, like others I've seen about the web, I'm working up another Fantasy army intended to work for multiple rulesets. Looks good for year two of the Fantasy Renaissance. Here's to more opportunities to explore the variety out there in the genre, and the various commercial offerings to model them with.