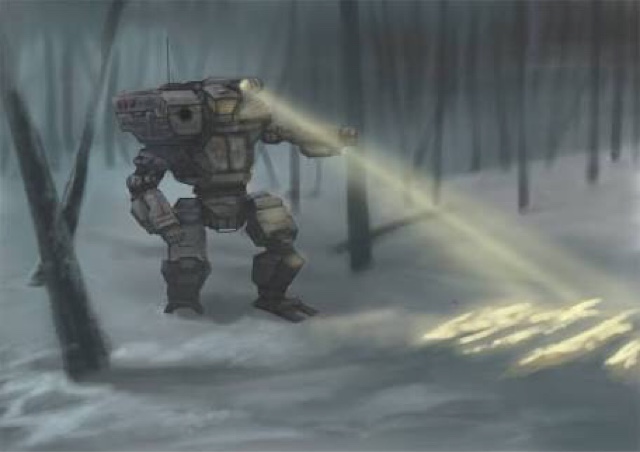 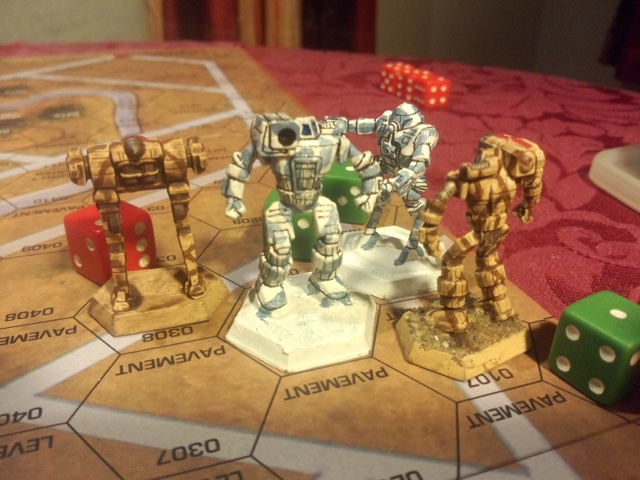 I'm liking this game even more than expected. Last Saturday, a medium Lance (Hunchback, Vindicator, Janner, Maercury) from the Merc Company Raven feeders tangled with some Comstar forces on some nameless desert Moon. After our experience last time, the new setup was: 150 tons, lights and mediums only. The Comstar forces were a Crab, Hunchback (but a variant with massed medium lasers, no AC20!), and a pair of the filthy super-Mongooses. I liked Nathans opening gambit:bait me with a hit-and-run Mongoose to pull me into range of his mediums... 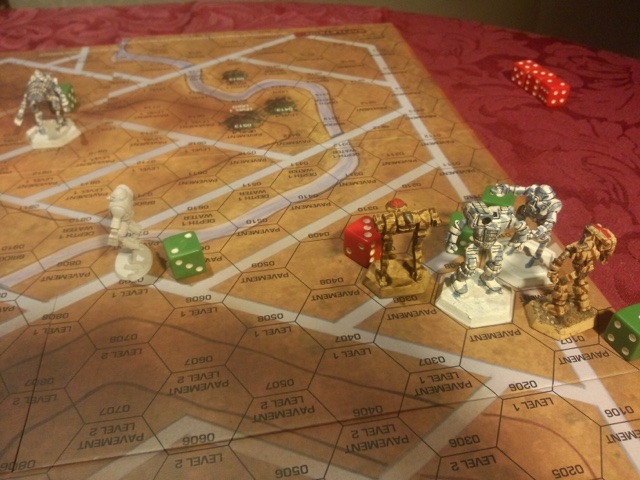 However, I was not feeling cooperative. My deployment area was screened by a large elevation rise so I kept everyone focused on whatever mech I could angle a shot at around of the side of that. When his Mongoose decided to fade back to his lines, I rushed the Jenner forward to flank his Hunchback while walking my own Hunchback around to the opposite flank. We use green dice to show walking, red is running, blue is jumping. The number on the die is the modifier for shooting at them. Sixes men no modifier (ie stationary). Here the activation system has let me 'fork' that Hunchback. The Jenner will torso twist to hit its side. That Mongoose will be ignored, for now. 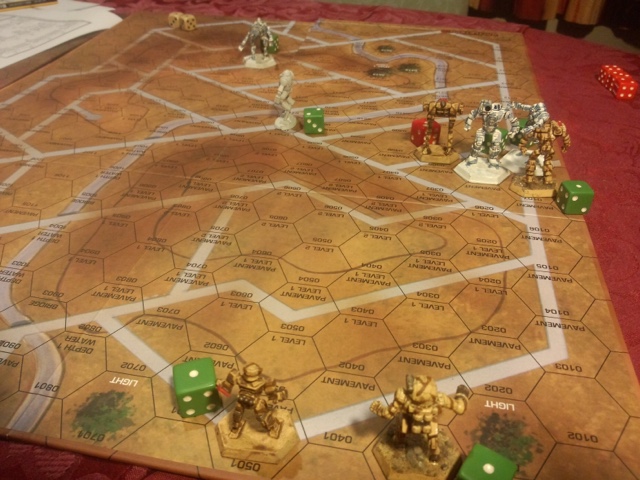 Because my big 'insight' this game was that Battletech is basically a naval game. The small model count and chart based crit system should have given it away earlier, huh? So you need to gang up to bring something down and then position so that doing this doesn't given the enemy cheap hits. So my Mercury continues to hide behind the hill while my Vindicator (bottom right) joins in by trying and failing, to nail the enemy Hunchback with its PPC. You lose some, you win some, that AC20 didn't miss though... 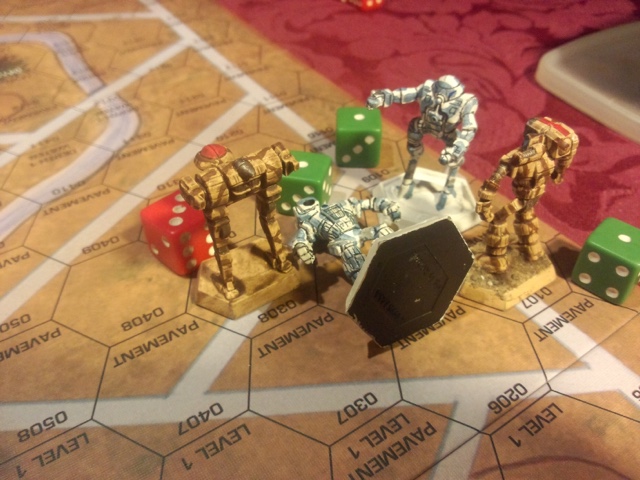 Yup. Close range AC20 shots and kicks to the legs saw Nathans Hunchback hit the sand early. I know the Medium laser is supposed to be the most efficient weapon in the game but I just can't See how you would pass up the ability to apply 20pts of damage to a single location. Sure if the AC20 misses, then you are basically doing no damage. However, I feel that for initial turns, multiple laser hits will have effectively done nothing as well. 5pts scattered over multiple locations potentially hasn't even penetrated the armour on a light mech. Saying that, sometimes scattered damage helps too, for ignoring critical once structure is laid bare, or when my one point of LRM 5 damage allowed another of my Mech's to hit structure on an arm turn one. 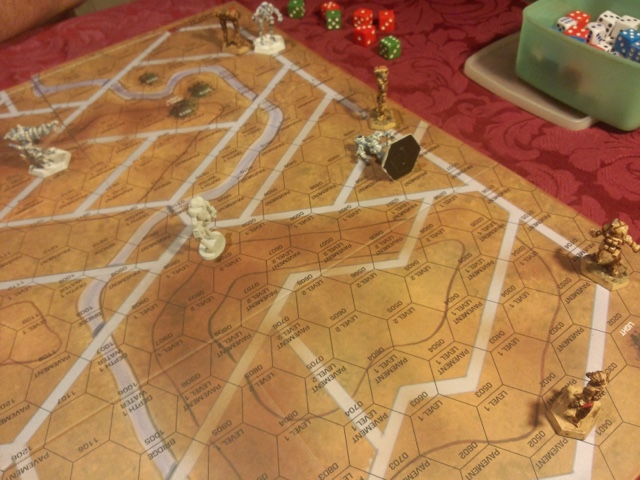 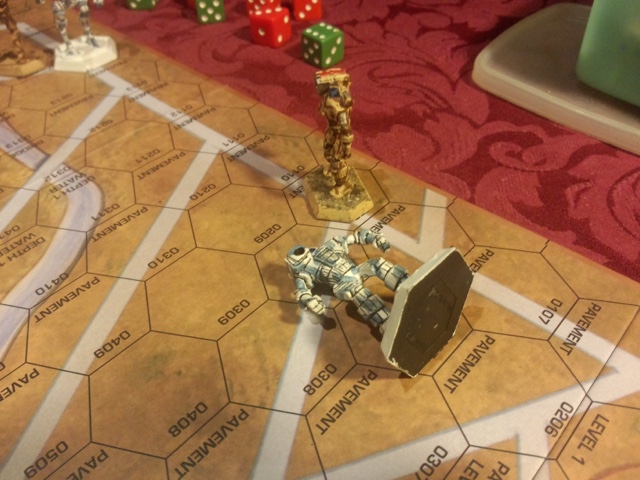 Nathans Hunchback Pilot opted to lie where he was an aim all his Lasers up at my Mech looming over him. Risky move. He avoided failing to get up and other hazards but takes a reasonable penalty to all shooting. At this range, vs a Prone target, my AC20 is unlikely to miss. I think the reasoning is that the Hunchback could take this while that Crab of Nathan's would be hitting my mech with its large lasers. 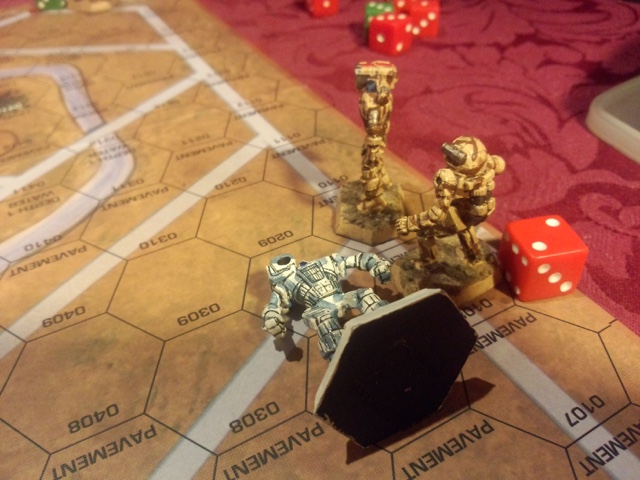 However, the motto of my Mercs is "Fighting fair, keeps the Ravens hungry". Activation order strikes again and my Hunchback is now where Nathans one cannot shoot It and my two heaviest Mech's loom over Nathans one. As it is, Nathan just manages to target the Vindicator by propping himself up on one arm. So the damage continues to be spread around. 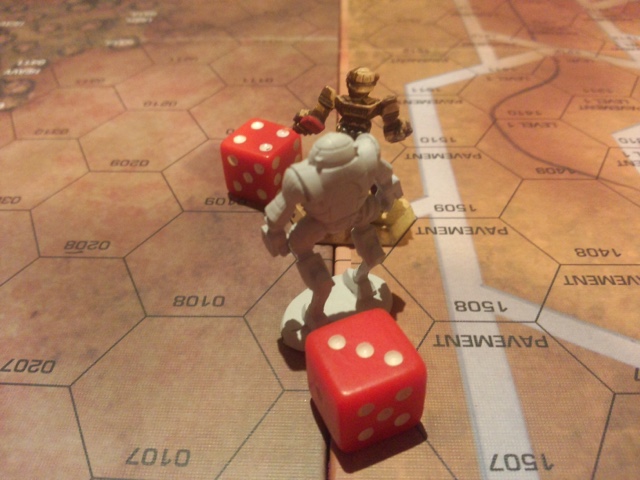 What about my Mercury? Well it was off at a run, in the hope I could either circle around the back of that Crab or at least draw off his other Mongoose while my two Mech's kept curb-stomping that Hunchback. See that target mod, +4! And Nathans other filthy super-Mongoose decided to chase me. Activation order was not my friend here. Luckily, the combined mods meant I didn't die in a single turn to hits to my rear torso. 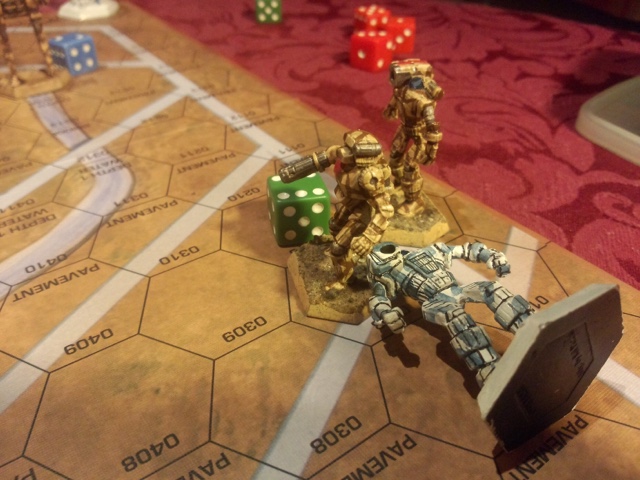 Nathan still didn't try to stand that Mech up. I almost felt sorry for its poor Mechwarrior at that point. Hot, god forsaken backwater moon. Fighting Mercs. And now you are lying on your back with a monster headache while AC20, PPC and Laser fire is punctuated by kicks to your body and the constant din of 'weapon destroyed' messages. Worse still, that Crab that was supposed to have your back, got distracted for a turn by a choice rear shot on the Jenner. Trailing quite a lot of smoke, my Jenner pilot made a hasty jump to the perfect hex. Still in LOS but waist deep in water with both elevation and light woods to mess with further shots from that Crab. Which would no longer be at my rear. That was close. The Jenner's quarry was still there ahead, starting to list to the left from significant torso and leg damage. 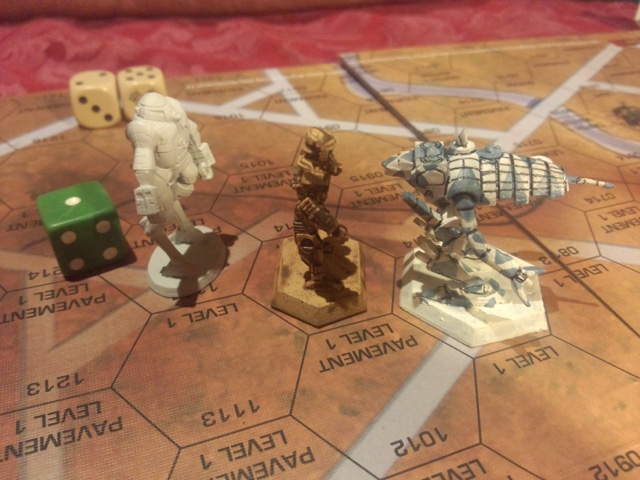 That Crab had other things to worry about though. Sure it was only a few Lasers but my Mercury was now at its destination. I figured I could get some good hits in before my light Mech died and then, even Super-Mongooses would fear my mediums. 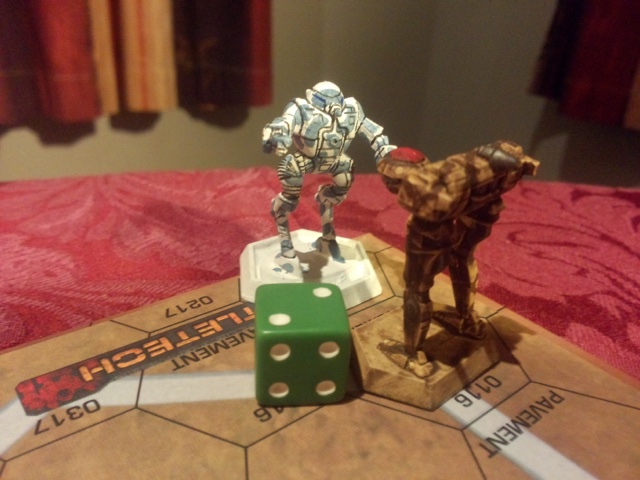 The Jenner totalled that other Mongoose. I need to remember to look up what happens when engines explode as I probably should stand so close. Now it's four on three. 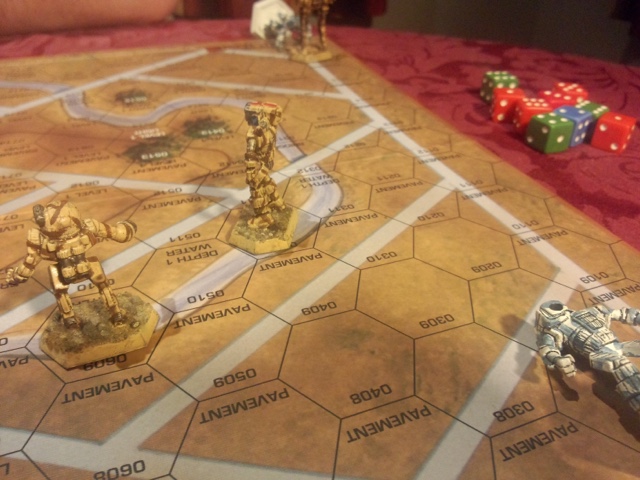 Actually, aside from his still getting to count the Hunchback as an activation, make that four on two. He had lost every last laser and had a broken leg. So I just left what remained for some minor salvage. I'm sure I can source another AC20 to replace all those lost lasers. My Hunchback an Vindicator lumbered up to the base of the Crabs hill, took their positions in a stream, and prepared themselves to slog it out and eliminate it over a few turns with fire from three Mechs. 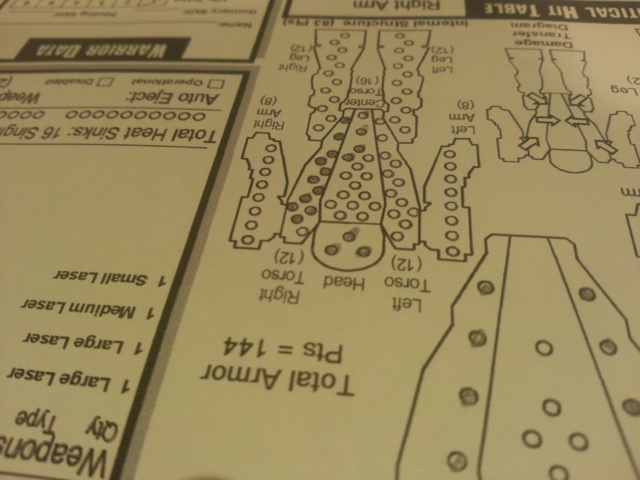 Then this happened, my Vindicator scored a hit with its PPC, straight to the head! Game over man, game over.

Another great game. 2.5 hours from start to finish. I definitely want to give,the lighter Mechs a go again.  I too feel the lure of the assault mech, and put an Atlas on the painting table after game one, but you can't argue with the attraction of a decent playtime. My big question at this stage is whether I can find another plastic box set Hunchback online for a reasonable price. The metal one that Nathan had is noticeably different in scale. Sadly it's not one of the Mech's in the Alphastrike boxes. Nathan has also got me wanting a pair of Mongooses of my own. On reflection though, they are good for their weight but presumably will seem less so when we start using battle value and, in the final analysis, they still only fill a light Mech's role: once they stop running, they die.