WOTR: Workers and Peasants of Gondor vs Running Dog Lackeys of the Valar 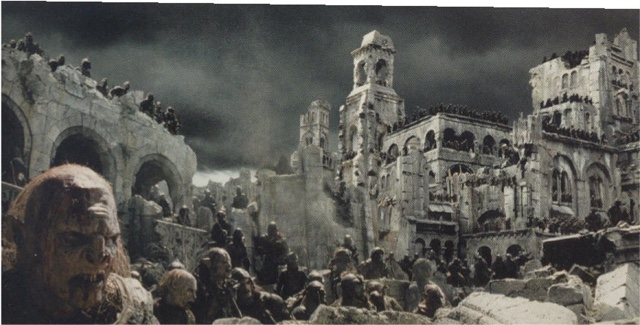 Hundreds of Years after the Elven running-dog-lackeys of the Valar aided in the betrayal of the proud workers paradise of Carn Dum, the spirit of the revolution has not died. Every decade more Elves slink over the sea. King Elessar has died. Even the Dwarves have all found a very deep hole, under the Misty Mountains, and look set to make it deeper. Workers and Peasants of Middle Earth, the time is now. Our agents have made their way from the Red Fortress Ministry of Truth. We are ready to show the flailing men of the South the Light of the New Shadow and our glorious Revolution. Every giant ... presupposes a dwarf, every genius a hidebound philistine.... The first are too great for this world, and so they are thrown out. But the latter strike root in it and remain.... Now small and petty men rule the Reunited Kingdom and the Shadow shall rise once more. 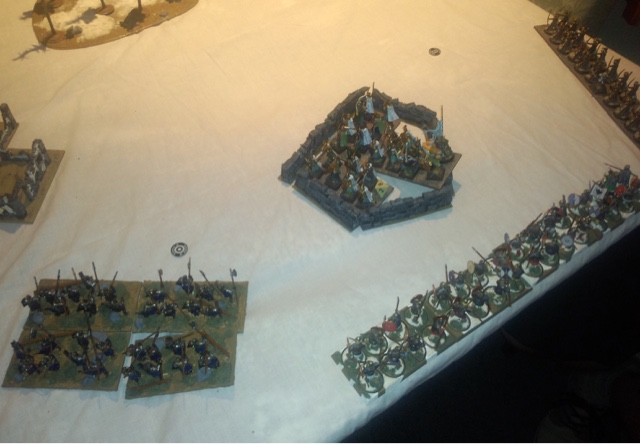 Yes our great Revolutionary Leaders: The Witch-King (a totally honorary and non Monarchial title) and Sauron are gone. However, a young firebrand from Ithilien has led his men to a snowy vale. Their initial attacks took several valuable artefacts, rumoured to be First Age in origin, from of Even hands. The cowardly lackeys of the Valar no doubt aimed to steal these treasures away from the free people's of Middle Earth. But Blizzards hit and the five pieces of an Idol of the great shadow, (Morgoth himself?) lay scattered in the snows. Suddenly it was a scramble as both brave revolutionary heroes and sinister Elves rushed from all directions, to claim their prize. 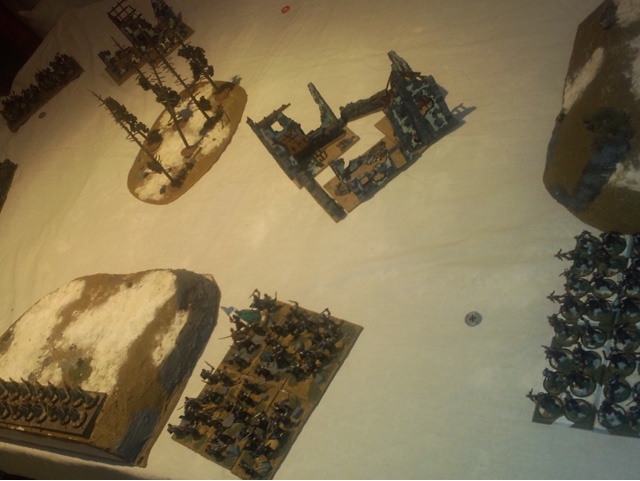 The spineless Elves stole several key positions before our Men could arrive. Overconfident in their arrogance they were caught unprepared when a re-educated ghostly Queen led forth many Men to asail their position. Behind, the crude marching chants of our allied Uruk brethren could be heard as crossbows arrived to dislodge the spineless High and Mighty Elves. 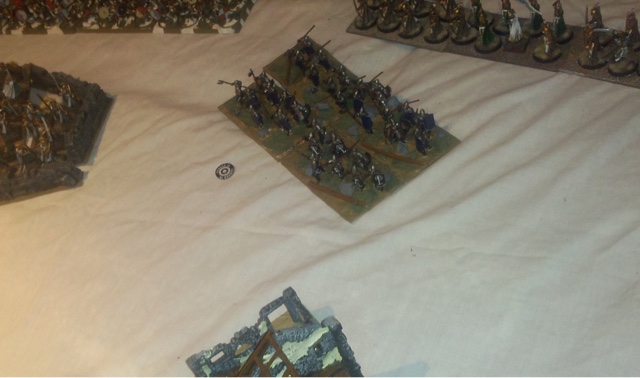 More and more of them came gliding creepily over the snow. A useful trick for these enemies of the people, sneaking about. I hear they take human babies in the night for who knows what reason. I dare not even speculate. Ok, the Red Book of Morgoth-Sauronism states they eat them. Here they fight true men though and we have the first of the artefacts. Hah! 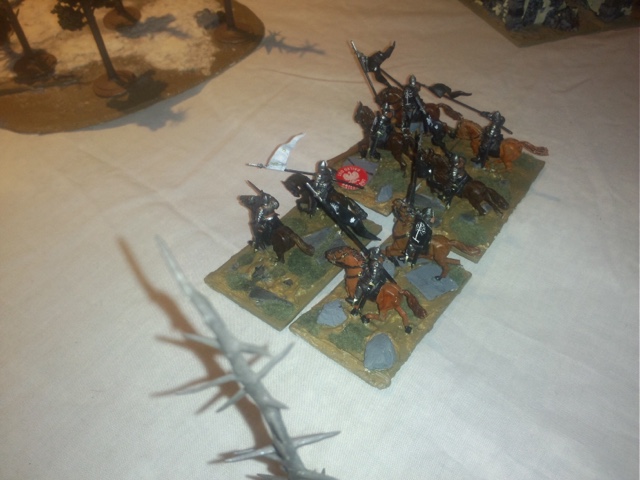 And again! The mounted Revolutionary Guard arrive and sweep up another fragment of the idol on their way to hit the cowardly Elves in the flanks. 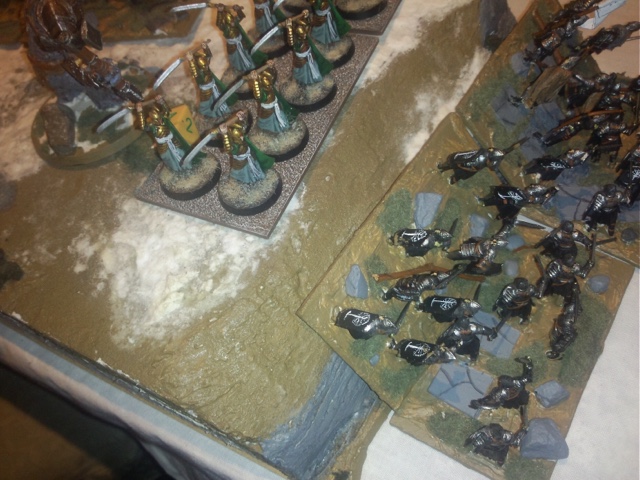 Meanwhile our brave comrades from Ithilien have got themselves in a spot of difficulty fighting counterrevolutionary elements on that hill. Luckily a very cold and hungry Troll has arrived for dinner and something to get his circulation going. The Elves are incredibly tough though. And their glaives are very sharp. 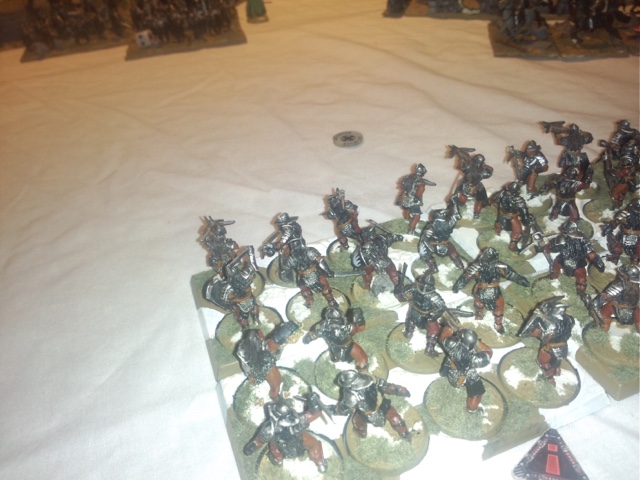 No matter. Our trusty fellows from the workers-committes of the former Tower of the White hand have a solution in the form of aggressive massed crossbow fire. Pity they were over eager to strike at our enemies, and turned out to be out of range. 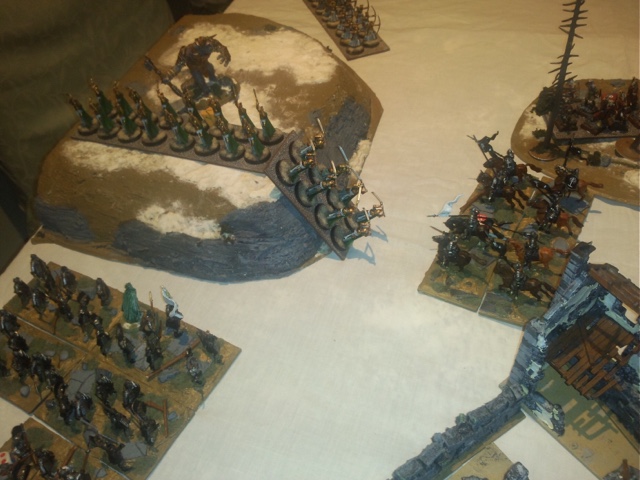 What's this? The foolish minions of the Valar have turned their attentions too much to our comrades in the North. We've lost some horse to scattered archery from ambushes in the trees but they still have their idol fragment; And that arrow fire has just added to the zeal of our Revolutionary Guard. Those Elves on the Hill are in for a serious comeuppance. 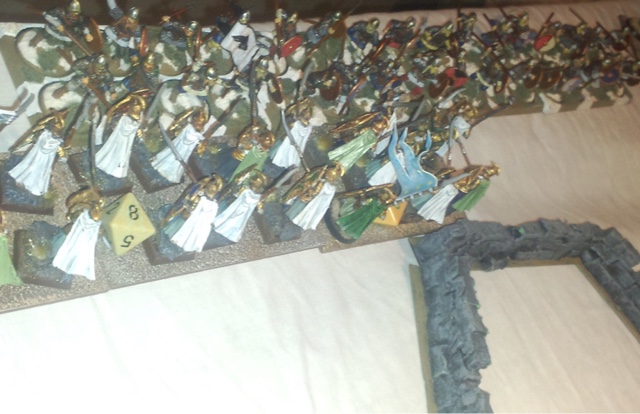 Fortunately for all concerned, aside from our men being crushed on the flank, the decadent and yellow-bellied Elven Guards prefer beating up our Comrades from Anfalas. Putting the jack-boot into the Lumpen has distracted those Fascists from securing their lost treasures. 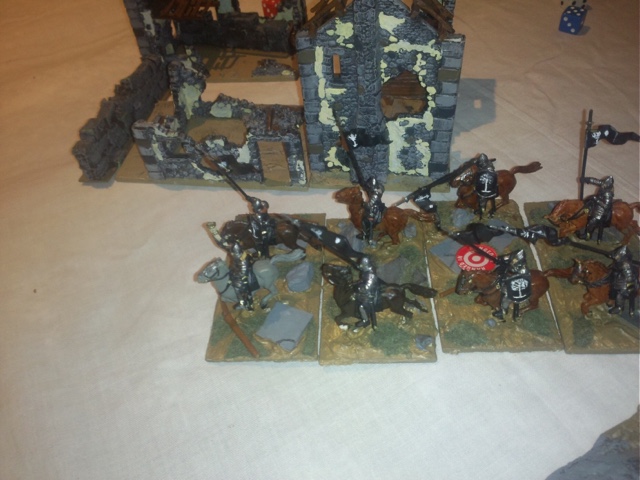 After a long delay (taking a shortcut is never a sound plan), still more Revolutionary Guard swiftly arrived and located another treasure in the snow. Then they hid behind a ruin for the rest of the battle, brave heroes of the people, every last one. 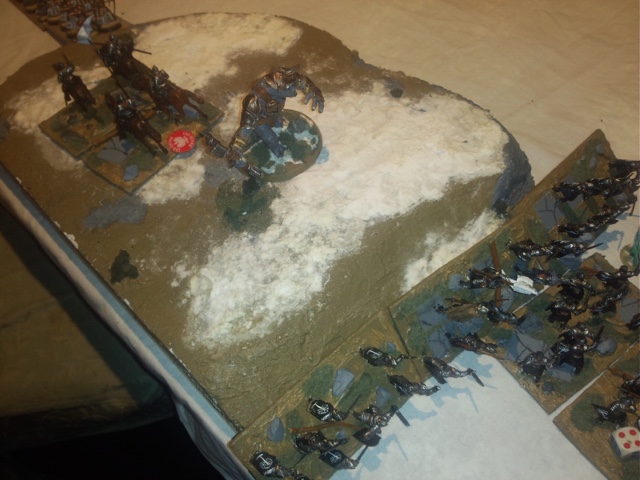 And why not? The corrupt running dogs of our Westron oppressors seemed content to take their time. However, not even a Elf livesforever. We've got three of the pieces and they have one. The tides of history are with us! 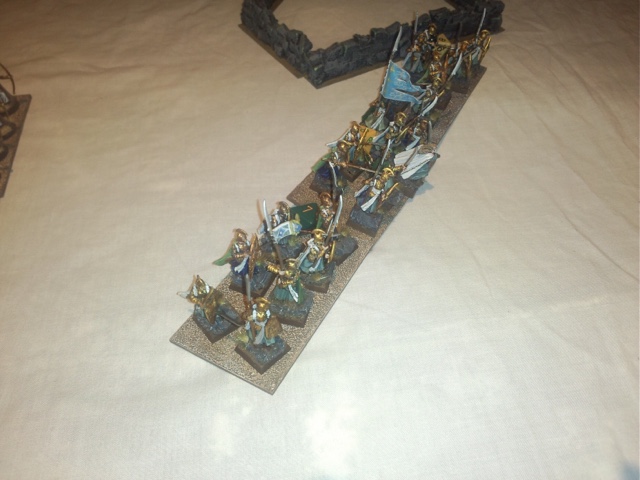 Hang on, the Elven Guard have decided to fight. Pity they skulked to long behind those walls, now they have a long slog in the snow ahead. 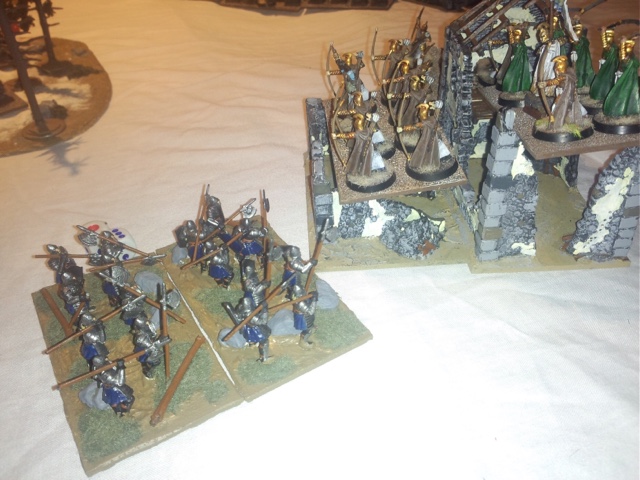 Things have gone decidedly less well on the far flank. The comrades from Lossarnach have been booted from their base in tall ruin, and their piece of the idol stolen. So now the Elves have two to our three. We can smell the snow closing in though. We just need to hold on! 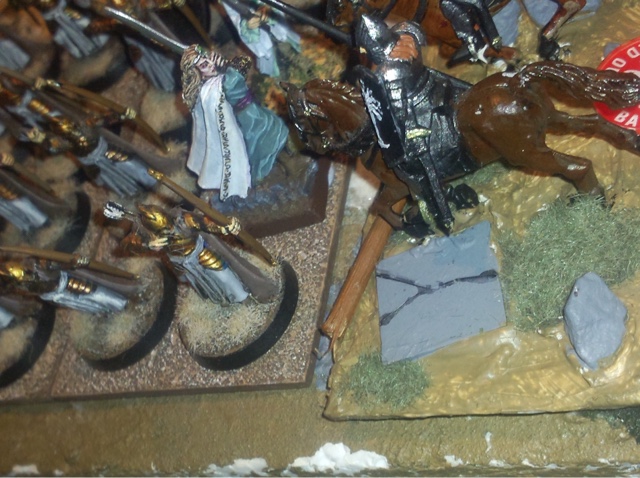 I mean - forward for the Revolution Comrades! Our Mounted Guard decide to charge down Glorfindel! Not to worry, losing to this lick-spittle of the far off Valar will only see a third piece of the idol fall to enemy hands and perhaps cost us the battle. Of course the Heroic Heurenor beat off the Eldar in single combat and left many foes dead in the before wheeling about to retire. 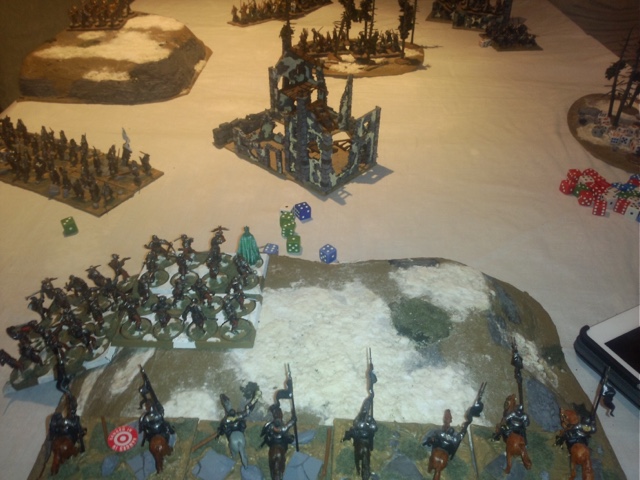 To the matter at hand - cooler heads have prevailed and our brave heroes have withdrawn to make their stand on the slopes to the south of the battlefield. Let's make the Elves come to us. Rumours spread after the battle by traitors and class-enemies to the effect that we feared the Rivendell Guard are patently false. 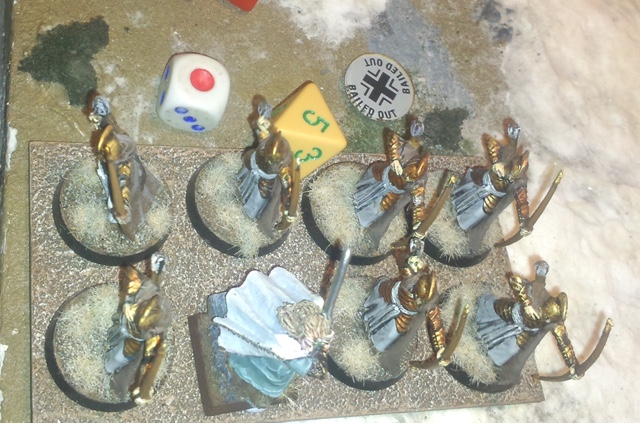 So it was that the Sinister Glorfindel was left with four Elven archers for escort and chasing us through the snow, lugging on of their idol fragments with them. 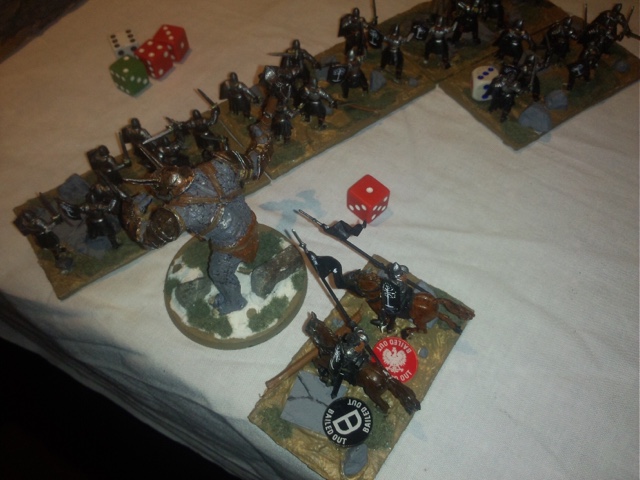 With nothing left to prove after besting him man to spineless-running-dog of the Valar, Heurenor and his bodyguard retired with our troll and a screen of Veteran Revolutionaries from Ithilien. 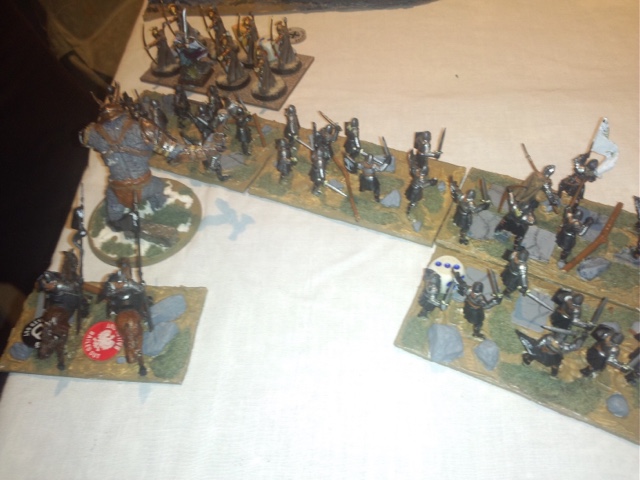 As the Elves lurched forward in despair, scattered arrows fell Heurenor. Our answer was an accurate volley of Uruk crossbow fire from the hill behind. I am pleased to report there were now Elven survivors and we were able to withdraw as Victors.

Well that was a blast. My guys were Gondor Miniatures using the Fallen Realms list to represent rebels swayed by the Shadow Cult in the Fourth Age. So no Nazgul and I chose Queen Beruthiel to be the General. Andy was using the Elven Noldor List I wrote. Of course we also used the houserules. So those Elves were incredibly hard to take down but also not as numerous as my guys. The mission was Maelstrom with seize the prize. And apologies: The Red Fortress Ministry of Truth has got a bit out of practice.