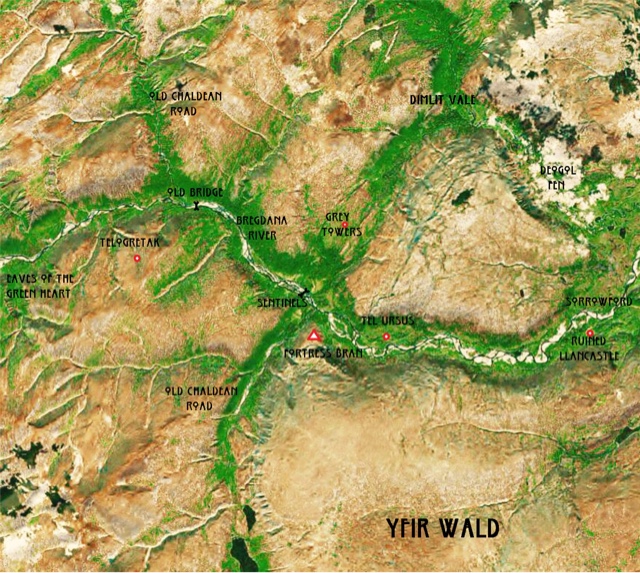 Here it is, the YFirwald. So far the graveyard of one Human expedition. Recently. I wonder what the Sorrowfords may been named for... But new Leadership headed a new army, Mercenaries rather than Imperial troops, north through Deogol Fens. Meanwhile, The Mage Arcturus led his small band of treasure hunters to pick through half drowned ruins lining the sunken way to Dimlit Vale. Rumour had it that great earth-burrowing Wyrmms hunted there. However, none were seen and were mayhap just a rumour or Elven ruse to deter treasure seekers. The Elven Mage reprised his aggressive strategy and was caught alone, surrounded by Arcturus' elite Rangers. Somehow the wounded Elves all survived but the Humans bore off much treasure. Treasure enough to draw many hard bitten mercenaries  to our banners.... 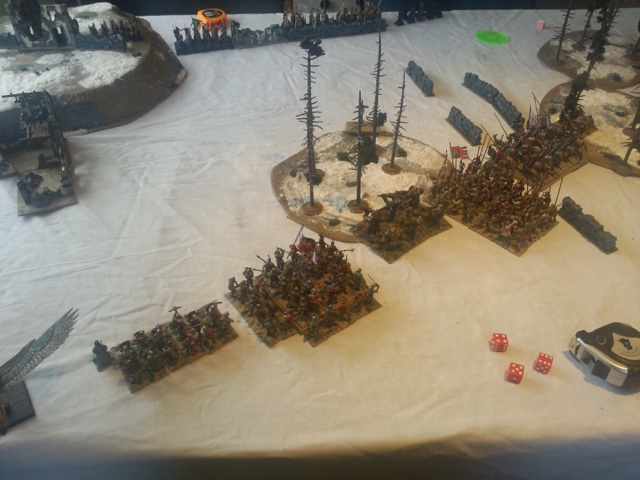 My Lords, were it not for the merciless winnowing of the last Imperial force by Elven arrows, our numbers would have granted me great confidence. As it was, we were better prepared in other ways than man power. Our commander was not a prelate but rather the veteran General Calisthen. His forces bore a superficial resemblance to the last battle. Now we had elite Veronan sharpshooters, well armoured and equiped with Pavises to ward off arrows. While the Paymasters bodyguard were not quite the equal, man for man, as Imperial Guards, they compensated by being twice their number. Moreover, to their right flank were Ogre gunners to replace one of the Mortars, and then the Pike further right were heavily armoured Veterans of the Ulati Marches. Heavy cavalry and a flaming mortar rounded out the force. That and a winged Gryphon so fierce, it was reputed to rival the Anatani Dragons of old! 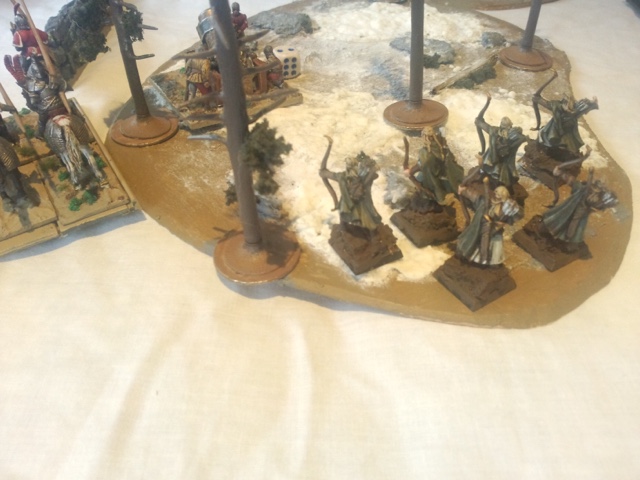 I had hoped preparation would be our other advantage. No more marching blindly forward. With the benefit of further studies we knew who were the Swordsmasters, who the elite archers and yeah even that no human horse could beat charge faster than an elf could shoot.... But there is no end to Elven trickery and the opening act of the battle was the arrival of infiltrating archers at the rear, bows trained on our artillery. 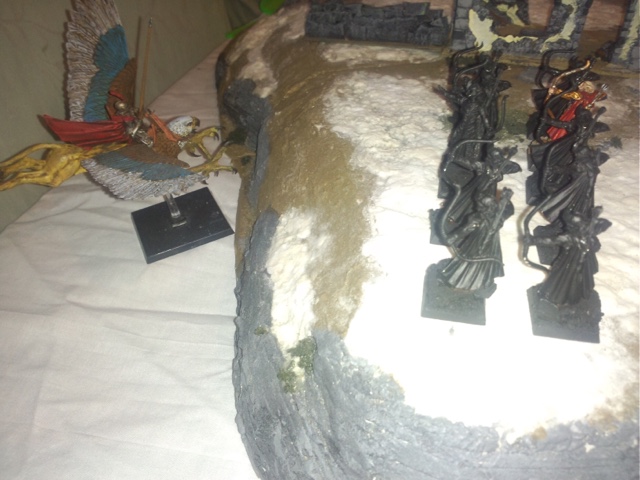 We Feared not though, our spirits bouyed by the majestic sight of the Gryphon Lord swooping left toward the Elven flank. Arrows sailed ineffectually past, as it swooped down and and prepared to crash through the first of many Elven victims. 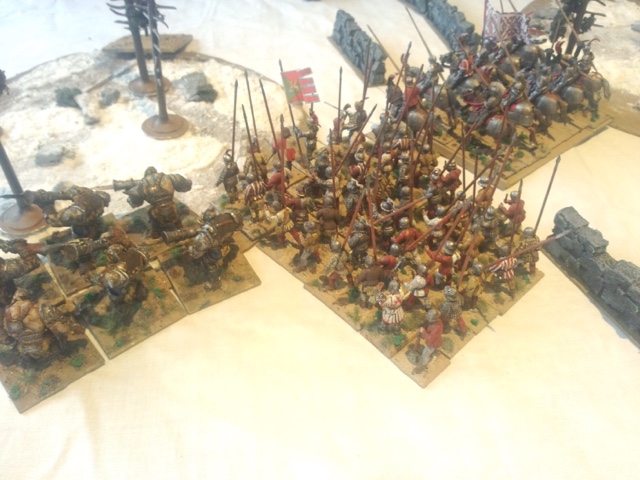 The General sounded the advance and we marched to the rhythm of Ogre guns. I saw the reputation of the Elven Swordsmasters was fairly earned, as volley after volley of heavy shot failed to inflict more than minimal casualties. 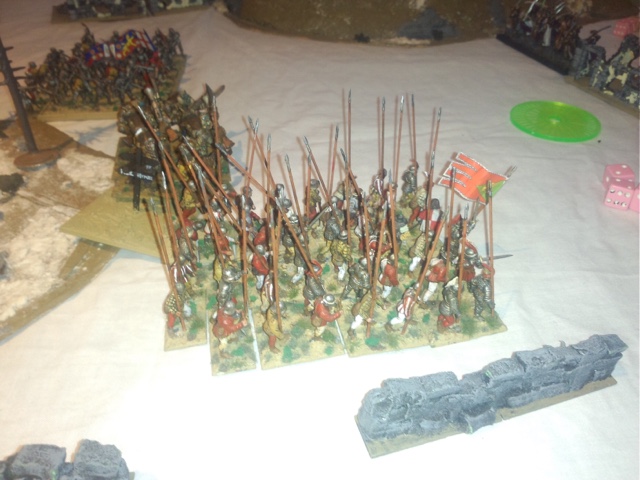 The Elven reply was at first subdued, they seemed content to fill that mortar with arrows until, finally, its crew were dead. However, when the pike cleared the forest edge, Elven alchemy transmuted many of their company to solid gold. To their credit, this did not distract their comrades, nor even the Orgres marching and shooting at their flank. 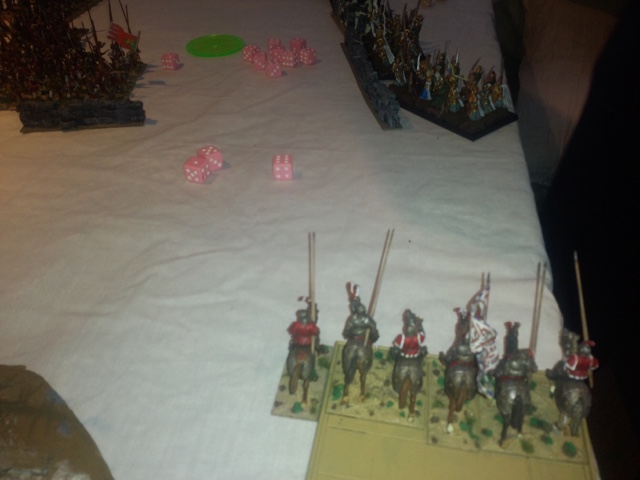 Our horse had had early success, riding down a lone unit of Elven archers and wheeling about to threaten their flank. And their they waited, watching the Pike make the charge on Elven lines and to the far left the Griffon Lord ran down another archer unit. The pike were brutally effective. At first the combat seemed almost even but their depth of formation and forest of deadly spear points pushed the Elves in the centre into retreat. 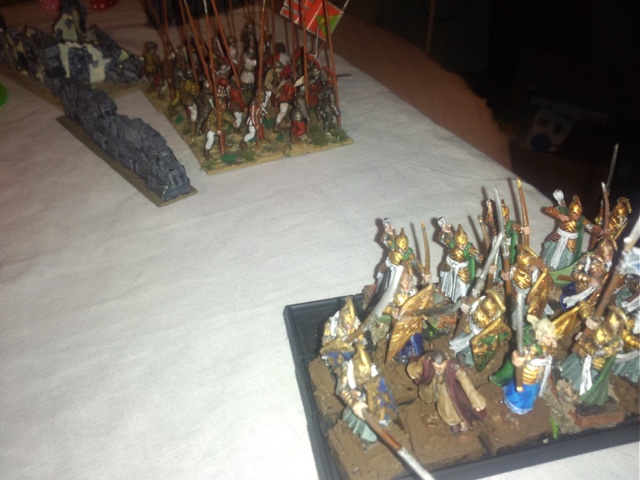 While our pike pursued their quarry, the Elves decided to charge our horse... Only to find them unwilling to brave Elven spears, withdrawing and pulling their attackers further from the fight. But what of the storied Elven Swordsmasters? They are reputed to be able to swing battle by their prowess alone. However, General Calisthen was not a Veteran of scores of contracts through a love for fair fights. 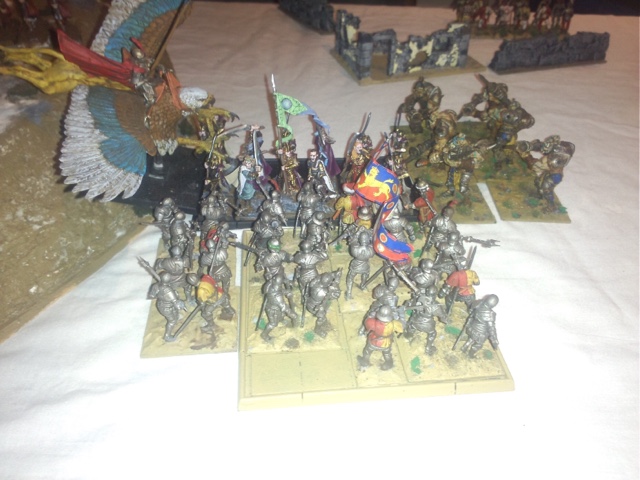 While the Pike smashed the Elven line, the Paymasters bodyguard, resplendent in Amanthor plate, recieved the Swordsmasters charge. There, they stubbornly held their ground. So pinned, the fearsome Swordsmasters were unable resist when the Gryphon Lord came tearing down the hillside to their right, and the Ogre gunners crashed, bellowing, into their left.

I realised then that I had not truly believed we could win here, so total was out last defeat. But there, at the mouth of Dimlit vale, our cheers echoed round the hillsides and the remands of the Elven host were left to take their chances fleeing their defeat and the restless dead both.
------------------------

That was 1995 points vs 1560. I used the Furion Dogs of War list with some modifications (ie reduced dragon move, stubborn = bodyguard, and pike are just spears that fight in four ranks) . The army special rule is based on increments of 1000pts so I was 5 points shy of upgrading two more units. I upgraded my Bodyguards and Pike with heavy armour. The crossbow also benefited from similar upgrades and this made my guys a lot more durable.

It didn't hurt that Jason focused on the mortar early on. This plus the success of my fast units on both flanks dramatically reduced the harm my central melee units took before they had to fight. So even without the points edge, I was in a lot better shape to actually melee vs the gun line. This in turn meant  I won one even combat. The poor Swordsmasters did get the full brunt of the points differential though, as they probably faced several times their points from three directions. I'll take that (unfair, but we mercs don't like battles we can lose) win, as we head into game three at the battle scale.

At the skirmish level, despite all manner of harm inflicted on Jason's troops, the Wizards  are both on a par. Jason's success at the well of souls balanced out by my treasure grab at the Wyrm hunt. Neither Mage really played a massive role in the battle. I expect both to be Lvl 4s by battle three.

I think I almost have the weird logic of WHFB now. It's more like the pass and hit at a joust than the grind of battle lines. Weird things like long charges, the concentration into a relatively small number of units, feints, and a wide variance in unit capacities. Playing it for what it is rather than what I think it should be definitely helps. However, it's probably no coincidence that the post before this is more homebrew rules musings.

Next up is S3 using the Frostgrave Keep scenario.