John has a brand new Imperial Star Destroyer and is doing the rounds, crushing the Rebellion one rag-tag flotilla at a time. I'm still waiting for my Wave two MC-80 to arrive, but we still gave it a go at 400 pts to play things properly. For John, thats the ISD with Screed, expanded Hangers, a Gladiator II with Assault Concussion missiles, and then same again with the Deolisher title. The fighter complement was four Interceptor wings and six TIE wings including Howlrunner. To get to 400pts without a big ship of my own, I had to go quite fighter heavy, for me. So I also had ten squadrons: two Y-Wings, two A-Wings, a B-Wing and five X-Wings. The ships were two Nebulon Bs (red headed step child but my favourite) Escort version with Yavaris and Salvation titles, Assault Frigate B with Gunnery teams and the flag ship was a Coevette A with General Riekeen in Command of the fleet. Did we last long against that Star Destroyer? 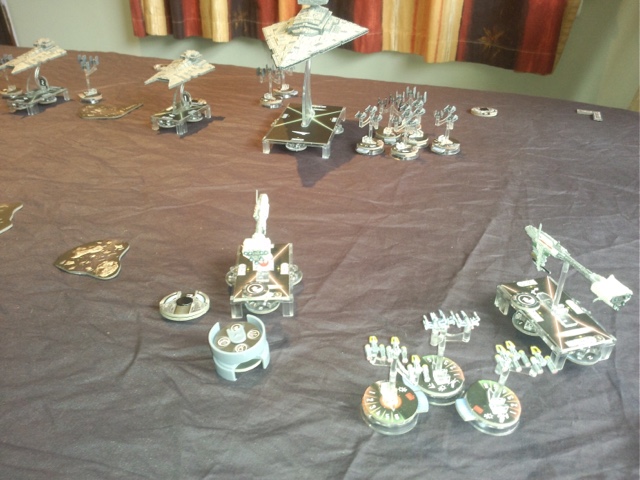 John had initiative and my objectives were "Most Wanted", "Intel Sweep" and "Contested Outpost"; he chose the latter. That obstacle to the left of the shot is the space station/objective and there is a Corvette there, facing horizontal to my right. Further left is the Assault frigate, aimed between the two Gladiators. So those two Frigates have the job of taking down an ISD. 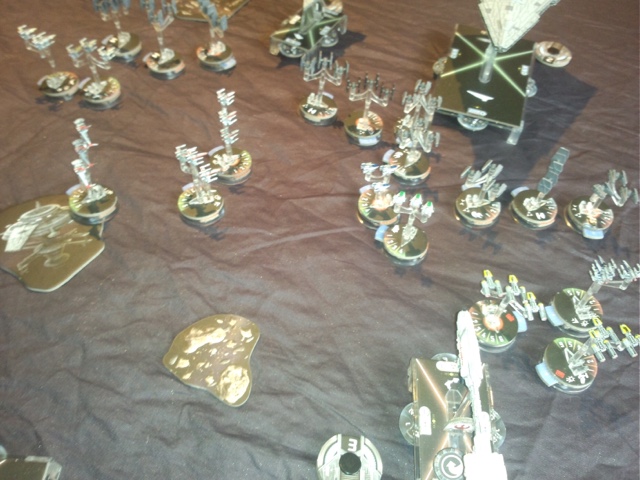 Turn two saw the fighter waves hit. Look at all them. John actually used the ISD as a carrier. Between that and savage blue dice from the TIEs (not many swarm rerolls even needed...) he alpha-striked my fighters. Interestingly, the ISD turned not toward the space station but toward one of my Nebulon B frigates. As it moved first, it brought itself into range of my Y-Wings. The Nebulon B Yavaris then triggered them for double attacks and their ion bombs savaged the beast's shields. When the frontal batteries of the frigates joined in, the big ship was already scrambling redirects just to avoid criticals on the hull. 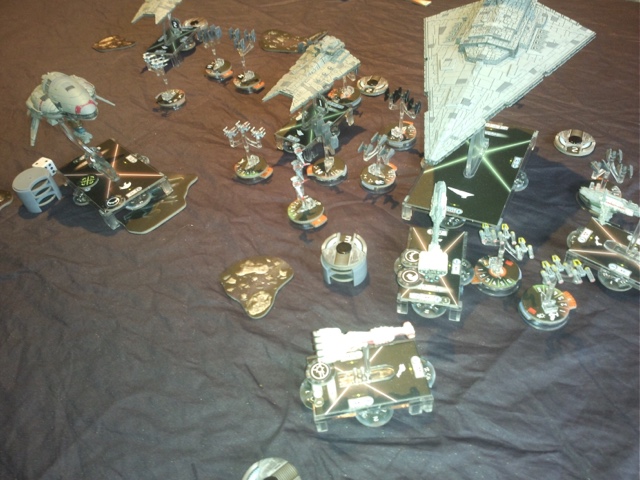 The ISD ploughed forward first and opted to contribute anti-squadron dice rather than start whittling down a frigate at range three. The impact of all this attention on my squadrons can be seen here: all A-Wings, and three X-Wings gone already. Then the Figate Salvation heaved into close range of the ISD. Claxons sounded and both took a damage card from the stress due to evasive manoeuvres. And here the other frigate "Yavaris" hooked around, unleashing the second wave of Y-Wing strikes. My Corvette was strafing by along the backline, contributing more long range hits. Meanwhile the Assault a Frigate contented itself hitting whatever Gladiator was in range. As the Yavariss swung around and rammed its flank, the Imperial commander siddenly became aware of his mortality. Almost all the Rebel fighters were gone but due to being caught in the wake of the onrush img ISD, the Tie Interceptor that should have engaged them had been moved out of range. It was going back in when... 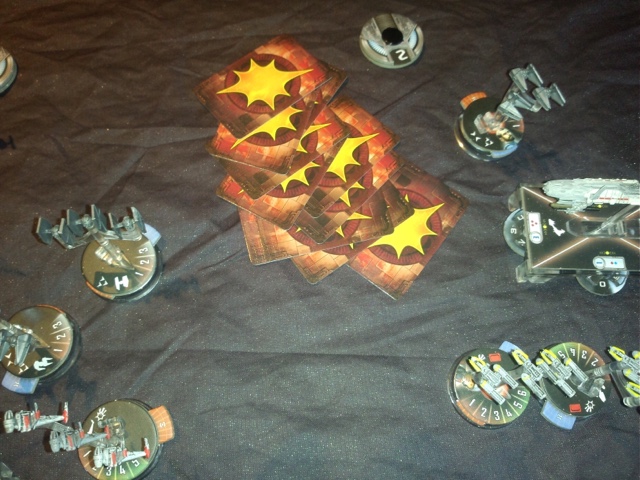 Frigate Slavation had another near miss with the ISD. One damage card. Then it smashed the beast with its bow armament. Then it somehow survived a full frontal battery hit from an ISD at close range. So two damage cards on the ISD when it was forced to move into the frigate. Every Rebel ship in range was pouring in every shot they could. When General Riekeen's strafing run saw it line up for his pass on the ISD, he was momentarily blinded by the flash of the exploding Salvation. The Demolisher had finally finished the job and stopped that Frigate getting another turn. This however presented an opportunity as the Corvette suddenly had a big gap to go through. He weighed up the option using his flank armament on the chance to take down that Interceptor. However, he decided to take the safe bet and put some more dice on that ISD. His red and blue dice came up with three hit. He had an intensify fire command. Perfect, the extra blue dice rolled a accuracy. No brace command for the ISD... And then it was gone.

Then John called it as the Rebel flotilla had a massive two victory tokens. More importantly, that Assault Frigate was totally unscathed and there was probably enough dice just from ships to take Demolisher while the lighter Rebel ships just danced away.

Great game, thanks John. I definitely wasn't expecting to beat your guys with what I had. Still, I'll take it. 300 pts was great but having the bigger ships just seems to give the game more focus. Can't wait for my own centre piece ship.