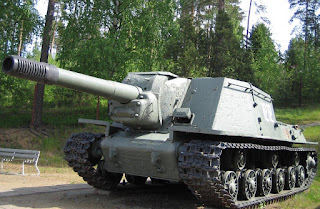 Fresh back from Southcon, Nathan was really keen to start trying things out for a potential Bolt Action Tournament at Conquest. I'm not 100% sure about the concept myself. Bolt Action is a great tournament game, fun and interesting and would be great to play a range of guys you wouldn't normally play. On the other hand, $40 to achieve this? I guess the theory is that most guys just like to go along to an event for the social aspect. I do know Nathan is looking hard at the missions aspect. So could be good.... Last week's trial was an assault on a bridge. I have Soviet Assault Engineers, so the scenario seems perfect. How did we go? 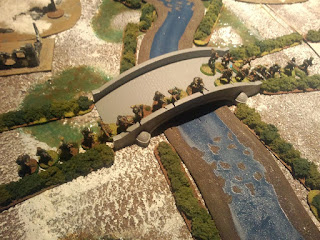 In this mission, there is a bridge slam bang in the middle of the table. The defenders (the Germans, being late '44 or early '45) deploy two platoons on the bridge itself. Then half of their force is a first wave. The attackers deploy half their force as a first wave and then the rest of our guys come on as reserve. The river itself is completely impassable and to take it, there must be no enemy models within 3". From turn two, at the end of each turn, a d6 is rolled and the charges are detonated, ending the game. 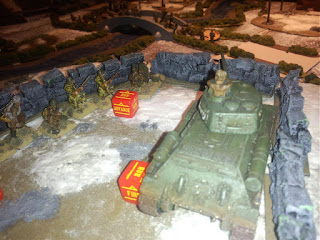 Just imagine this T-34 is the ISU-152 from the picture above. I gave the heavier SPG a go as a proxy as I'm thinking of buying one. I had a great hill overlooking the bridge and set up my MMG, ISU-152 and Heavy Mortar there. The heavy mortar was inexperienced and even with the solid stone walls was absolutely murdered at the start of the game by assault rifle fire from the 'Brandenbergers' defending the bridge. 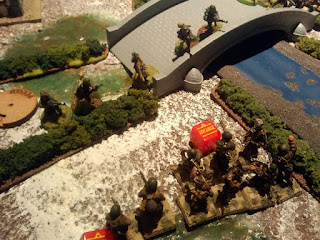 On the other hand, my HMG and the ISU were having fun. The ISU wasn't super accurate but its third round of shooting sent am explosive rubbish-bin tumbling into one of the two defending squads. If Nathan hadn't gone 'down', they'd probably have been wiped out! I also managed to get two squads of assault engineers and a flamethrower team up on the left side approach to the bridge and kept the defending Brandenbergers pinned down with SMG fire on the approach. 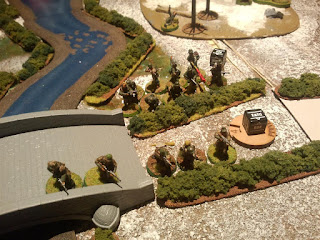 Of course, the Germans had Pioneers of their own and getting him rooted out of the other side of that bridge could prove.... tricky. 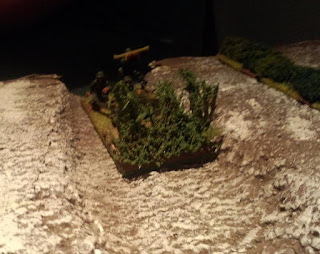 Still, Herr Nathan had problems of his own. Some how he had to supress a heavy Soviet SPG with only a 50mm ATG for ranged support. 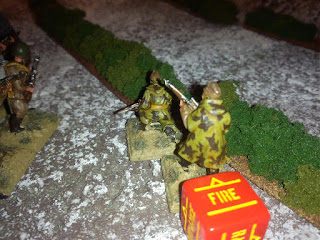 It didn't help matters for him that sniper Vasily was on fire that night. German NCOs were falling dead to headshots every few turns and it was really messing with his efforts to stop my advance. 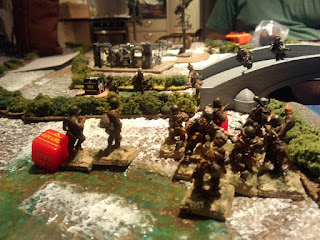 The German sniper got in on the action but struggled as it was hard to angle good shots when he had a line of his own troops across the middle of the table to defend the bridge. Things quickly became grim for the Germans at my point of attack as Soviet flamethrowers badly pinned, but did not break, the German Fanatics. The problem was, he just couldn't get them unpinned. 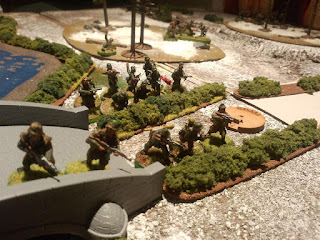 And the other defending squad had the same issue, pins piling up, no NCO and no officer in sight. Eventually they broke and decided to quite the war entirely after yet another fusillade of MMG fire. So it would be up to the Pioneers. 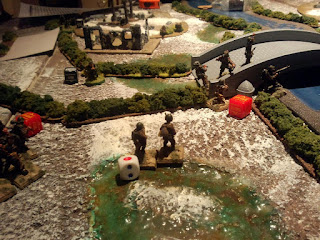 Meanwhile, my Assault Engineers were swarming all over the other side of the bridge. Only the German officer was there to somehow thwart them all by himself. 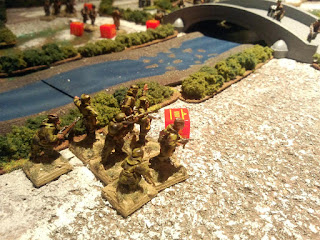 Pressure was on the other flank though as my Scouts were charging on from reserve to close the pincer at the other end. This mission doesn't allow either side to forward deploy, snipers, scouts or observers so glad I paid the extra points for that ability! 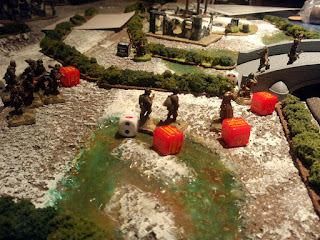 Despite hoping against hope, the German officer failed to kill the Soviet flamethrower team. Pinning them only. Then their sniper finally achieved something and took the team weapon out. My officer, SMG hidden under his trench coat, spurred the three guys left in my lead Assault Engineer squad on to take on the German pioneers. 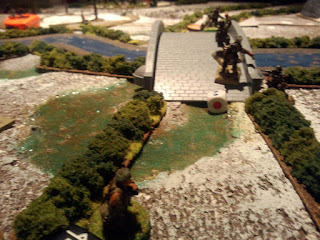 So the German officer took the clear shot up the road and shot one of them in the back, true Teutonic hero that he was. Two men vs some pioneers? Wait, what pioneers? I think that if I buy and ISU models I also need to get some resin craters. If you shoot after the target pioneer squad has already had their order, that's all that will be left of the target! 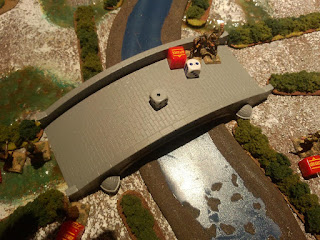 So success was in my grasp at the bottom of turn 5. All German defenders killed, too far away or so weak they couldn't challenge my screening troops. Then we rolled a 1 at the end of the turn and the bridge blew up. Robbed! Robbed I say! I think the Heroes of the RKKA who took the bridge (and so lost their lives shortly after) will at least be better off than me when I have to explain to Zhukov that I lost his key bridge...

Thanks Nathan, lots of fun. I like an objective in the middle of the board to get everyone fighting.