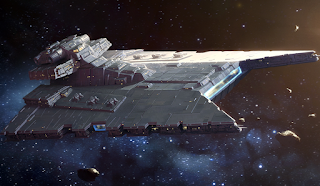 We have actual Wave One. John has acquired two Gladiators via Nathan going to Southcon and my "Brain"/Assault Frigate Mark II arrived from NZgameshop.com. At this point we have plenty of ships. I am just keen to also get some Rebel One squadrons and I'll have all the Rebels I need until Wave Two. John had already pitted his three pocket-Star Destroyers vs Ben (who prevailed with only the two Cap ships from a starter box) and he laid the challenge down to me on Friday. He worked out that along with the cap ships, he also got six TIEs including Howl runner. With the Assault Frigate, I was able to field two Nebulon B's (one as Salvation), Corvette A, Assault Frigate B, four C-Wings and Dodona as the Admiral. How did this ship heavy engagement go? 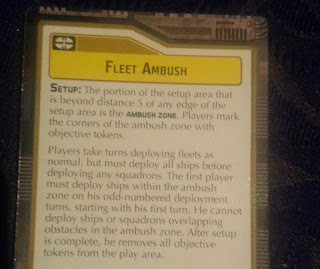 Tarkin's Intelligence man Wulf Yalaran had tracked Dodonna's small taskforce all over the Outer Rim, always arriving to abandoned depots or other cold leads. Then one day, he blundered into the Rebel force laying wait in ambush in an asteroid field in the Solthis Expanse. Rebel surprise was so total that the Imperial Admiral was not aboard to command his forces and Wulf had to take direct responsibility. In other words, John hadn't realised Wulf Yalaran was crew, rather than an Admiral. Our points were tied at 300 and Wulf/John had won initiative. His other choices were "Intel Sweep" and "Most Wanted". 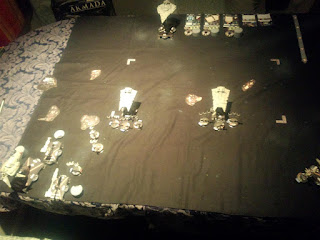 Wulf/John took Dodona's bait. Obviously "Intel Sweep" was not a serious option when I have a Corvette. "Most Wanted" isn't so bad for the Imperials but I'd have got to pick the target ship (The Demolisher, I pick the Demolisher) and also the ship he'd have to target... The battlefield as a patch of open, aside from asteroids, space between flanking Nebulas. The Nebulas were navigable but both of us subconsciously tended to keep to the darker open space. The Imperials put both Gladiators in the Ambush Zone with a TIE screen. I had a considerable deployment advantage, since in this mission ships must be deployed before squadrons. This meant I could put the Nebulon B "Absolution" on the left flank and then. 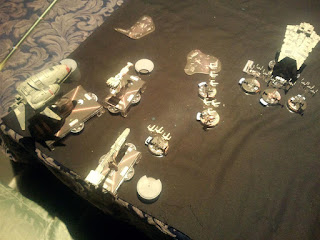 Then the Nebulon B "Salvation" were focused together with the blockade runner  "Celerity" and the Assault Frigate "Tyrannicide" as Dodona's Flagship. The blockade runner was tantalisingly close to the lead Gladiator "Demolisher", infamous for its aggressive driving attacks. 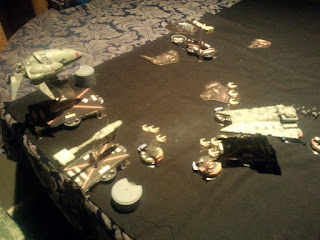 However, the Demolisher was unable to do more than pepper the Blockade Runner with fire as it closed. The powerful engines on the Rebel corvette pulled it well out of harms way. In fact all rebel ships were tantalising close to the Demolisher's close range missile batteries... but just outside. 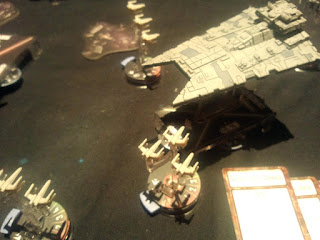 The Rebel trap was sprung and Salvation, Celerity and Tyrannicide concentrated exactly enough fire targeted fire to bring the Imperial ship down. Dodona's skill at targeting fire at critical areas was instrumental at finding the right arrears for maximum structural damage. 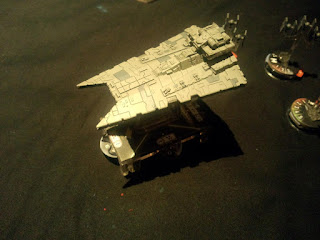 That left the other Gladiator out in space to choose between the Frigate Absolution and the rest of the Rebel fleet. 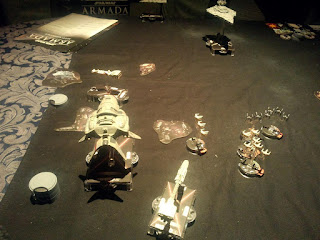 Wulf/John opted to bring the Gladiator about and move to catch the Rebel forces in a pincer with the Victory star Destroyer. Meanwhile the Rebels busied themselves gaining local fighter superiority and readied themselves for the Salvation to take the Star Destroyer head on while the Corvette Celerity  and the Assault Frigate Tyrannicide were to "cross the tee." 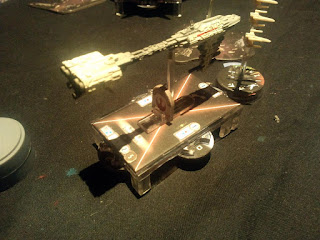 As the Salvation moved forward to engage the Victory, it took turbo laser fire at extreme range from the Imperial Gladiator. Other Rebel ships also reported minor damage. The frigate Absolution was proceeding flank speed to pursue the Gladiator but was constantly harried by swarming TIEs as its escorting X-Wings were destroyed. 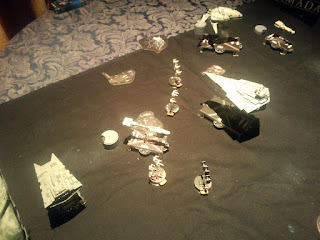 Dodona had the Salvation increase speed to draw away from the Gladiator's path and hopefully leave the slow turning ship out of the battle entirely. It rounded an asteroid and prepared to pour fire into that Victory's flank. 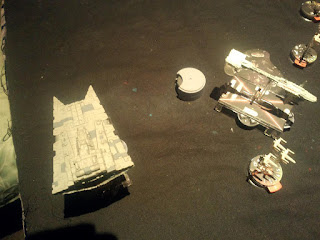 And Wuld/John had a painful decision to make. Either this double-arc shot on the Salvation... 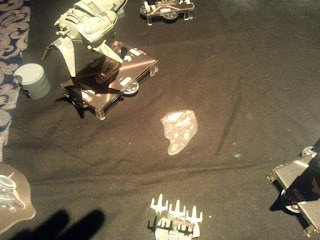 ...Or this punishing front and side combined volley from the Victory on Dodona's flagship as it crossed the Imperial path. After his instrumental role in downing the Demolisher, Wulf/John couldn't let Dodona go and unleashed all batteries. There were an impressive amount of hits and the Assault frigate Tyrannicide suffered collapsed shields on two arcs and minor hull damage. Those Mon Cal shield generators really came through. The Shields would regenerate quickly though and there wasn't anything to finish the job before that happened. 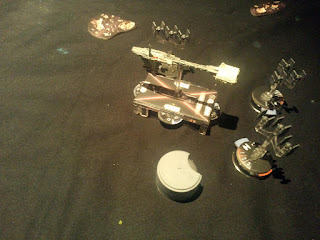 Out on the right flank, the Absolution was gradually losing it's TIE "escort", while suffering only light shield damage. A pair of X-Wing squadrons had similarly latched themselves onto the Victory but did no better than their Imperial counter-parts. 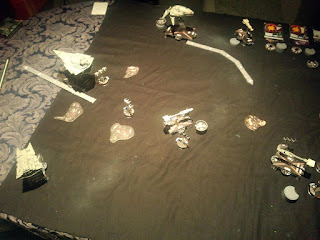 With the battle drawing to a close, it was clear Dodona's Rebels were going to have to let the other two Imperial ships slip the net. There was probably a little relief on the Rebel side too as the first bombardment from the Victory could have caused a disaster if only there had been something else there to capitalise on it before the Mon Cal shield generators kicked back in to replenish the shields. All in all, taking out the Demolisher, Howl runner, and some other TIEs for only the loss of a few X-Wings was enough of a boost to the Rebel cause for one day.

Good game John, heaps of fun. Yes will make sure we have enough black cloth to avoid "Nebulas" in future. I rate the cap-ship heavy Rebel fleet highly though great care had to be taken to contain Demolisher. I need to coordinate all my ships better as I suspect the will face a tighter Imperial pack next time.