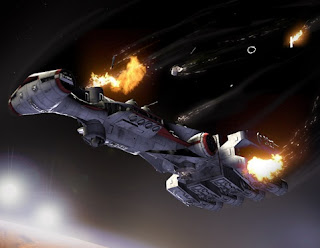 ... if discovered and promptly surrounded, will repay the intended mischief with interest. -Vegetius

Chris now has Armada. Well he has all the bits n pieces from the starter box plus the Imperial Ship and fighters. John and I split the rebel stuff. To celebrate the arrival of more Armada, Chris and I had a 300pt game yesterday. He had two Victorys, a mk I and a mk II with Moff Tarkin in overall command and the 10 TIES plus Howlrunner. I had my Assault Frigate, two Nebulon Bs (all the B versions, though the AF MkII had Turbolaser upgrades) and Corvette A (Leia and Jaina's Light). Dodonna was in command and four X-Wings flew escort. Chris won initiative and got to choose out of "Most Wanted", "Ambush" and "Intel Sweep." Out of that lot, Ambush was clearly the choice for him. Would the wily Tarkin fall into the Rebel trap?

The Ambush setup is a favourite of mine as it forces the Imperials to stagger their deployment. It's especially good vs a pair of ships and half the fleet has to start forward. Chris still got to put the TIE swarm up front though. Facing the Imperials was a wall of four Rebel ships, all placed far enough forward to have range as long as the Star destroyer moved forward. 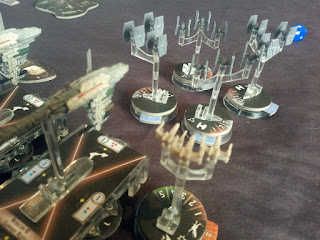 Chris/Tarkin moved forward alright, though it was hard to see the Victorys through the dense cloud of fighter craft roaring at full speed. I learned something new: I'd assumed  that Howlrunner had to engage to get the effect. No, no she does not. A squadron command right out of the gate stripped the shields right off an X-Wing. 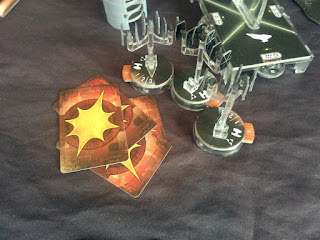 Then I had to move a ship. In my haste, I chose the Corvette. Then I realised my mistake. Tarkin allows no take-backs lol. 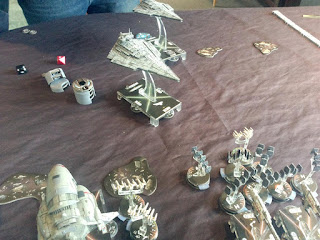 Then I got my return fire with command dials on top. It was not effective, between one volley getting halved and another doing little damage, it was nothing a VSD with Tarkin + Engineering command couldn't almost repair in a turn. 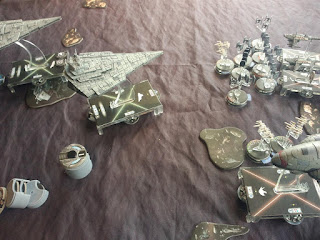 Still, things were all in the right position: The Nebulon Bs facing down the lead Victory and the AF mk II threading the asteroids, ready to curve around the flank. In theory, Dodonna along with the upgraded Turbo-lasers dealing the first two damage cards face-up would put some serious hurt on the enemy. In practice, I could never quite get the damage cards on the flank. I did get some on the front but didn't have the upgrades hitting that facing. All the while, the X-Wings dies, one by one. At least the swarm gave the Nebulons something to shoot their lackluster flank armament at... 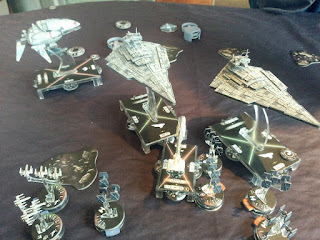 Crunch. Klaxons sounded as the Victory Mark I had to pull emergency manoeuvres to avoid colliding with on of my Frigates. The Frigate likewise had to evade and the shearing stresses on the hulls left them both damaged. the Nebulon then died to concentrated forward firepower from the Victory II. The AF mk II was looping around the back and had managed to drop the Victory I's shields but just couldn't land the last damage on the hull. 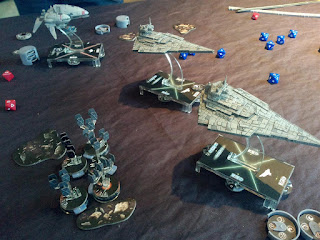 Then I had a problem, The Imperials had initiative and the blocking frigate obviously couldn't last in from of two Star Destroyers. So Imperial first move was to move the damaged one AWAY at flank speed. No way for the Assault Frigate mk II to catch and finish it in two turns.

So Tarkin disdainfully sailed his taskforce out of that graveyard of Rebel ships. Well played Chris/Tarkin. Back to the drawing board for the rebel fleet!