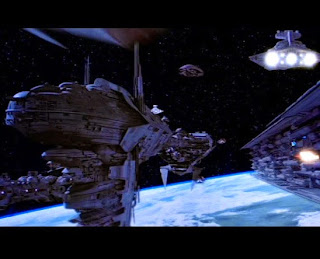 Can't get enough Star Wars Armada. The other game I got in last weekend was vs Chris. Chris doesn't mind collecting the odd Star Wars wargame model and also took part (long, long ago...) in our Star Wars campaign as the Chiss' enemy, the Vagaari. Here, he is the Galactic Empire. Since we are still on just the one box, he gets a whole ONE cap ship to my two. Basically no 'fleet building' involved. He has the TIEs including Howlrunner and of course his only choice is Tarkin. I have the Nebulon B and the Corvette, the X-Wings, Dodonna, and Luke. In the base box, the guy with Initiative gets to choose objectives or going first. Well that's always the case but in the base box version you always want to choose objectives or you could get an impossible fight. In the last game vs John one of the option was for bonus VP when hitting rear arcs. If I hadn't been able to choose "not that" I wouldn't have had a chance. So what did Chris/Tarkin go for? 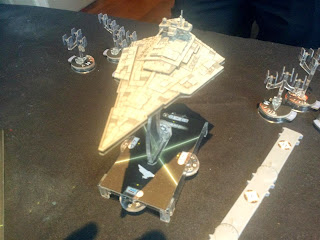 Opening Salvo. He is going second so my opening salvo is bonus red dice.... his is bonus red AND blue dice. Ouch. 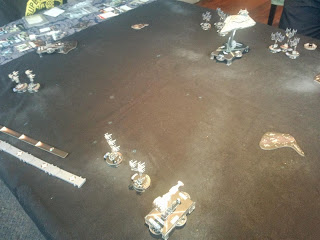 The Nebulon B is incredibly fiddly with it's movement as it has wide, weak side arcs that you want to avoid getting shot at all costs. So my plan was to come at the Vickie from two sides and ensure the Nebulon B was facing it front on. 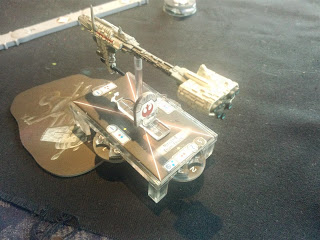 In order to ensure success, I gave the crew some last minute R and R at the space station as we made our way to battle. 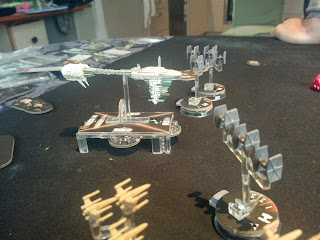 While Chrtis/Takin carefully lined up the Victory, in went the TIE swars to try and chip away at the Rebel ships. He decided to short-change the furball with my X-Wings in the middle on the off chance some TIEs could damage the Nebulon B's flanks. 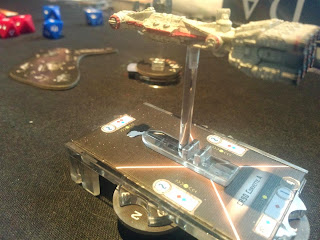 He also threw one TIE squadron around the flank of the Corvette and took down one of it's flank shields! 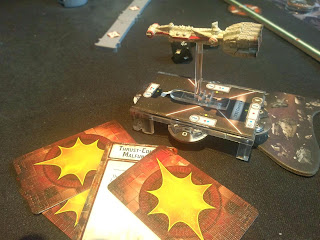 The Corvette then focus fired it's opening salvo on the Victory. I used an Intensify Fire order to get the most out of it so actually hit that debris field on the way round. My Nebulon B also got off a devastating opening Salvo at long range from the other flank. At least until Chris was reminded by me he hadn't used defence tokens... and he went back to last turn and used them vs both the Neb (hopefully I never rolled accuracy) and the Corvette. They made all the difference as otherwise it was down to half damage! 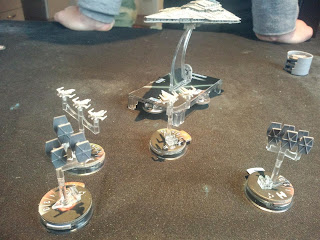 Sadly, it only took shield damage with all the tokens and the finished off the Corvette with its opening Salvo and the combined effects of debris field and the lone TIE squadrons Hail Mary shot. Ruh roh. I desperately wanted to slip through and engage him but my Squadrons were all tied down. 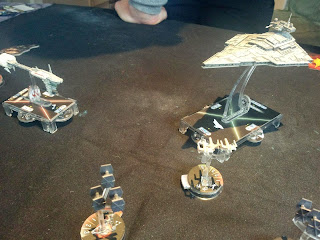 Chris/Tarkin did a really good job of throwing in TIEs with squadron commands to bog down X-Wings. I was slowly gaining the upper hand with the small ship fight... 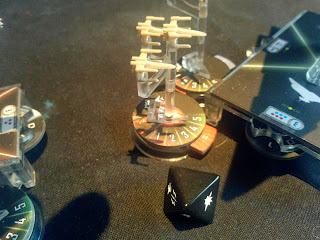 ...and the Farmboy from Tatooine makes it in! Yeeess.....nooooo! 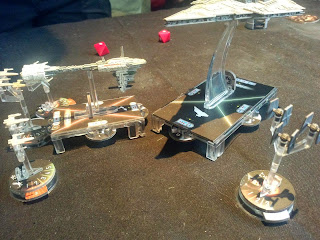 Chris Tarkin has kept the Victory slow while I've been using engineering to try and keep the Nebulon B from breaking in half undewr enemy fire. I get another volley into the Star Destroyer. It's starting to hurt him but I really need a good turn of squadron attacks on him. 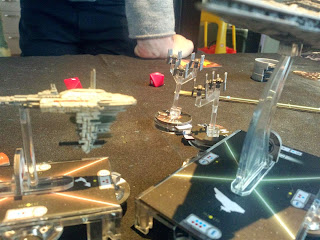 "Tarkin Parkin". Chris/Tarkin decides to just sit in my path and let me hit him. We both take some damage. He has however moved the little TIEs on-station with the Victory and they are now running an effective CAP to fend off the X-Wings. 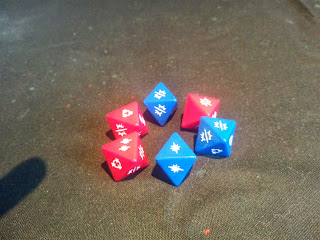 And why just kill me by a small margin. The last lot of Imperial fire is every bit as nasty as his opening salvo was. GG Chris/Tarkin. Another decisive Imperial victory. Shame I was playing rebels this time. 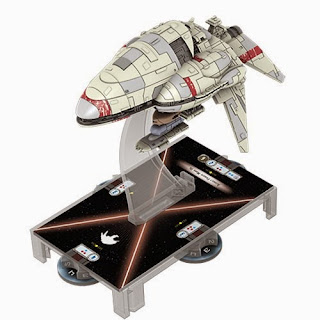 However the key thing is Chris liked the game. We've now got another box (to split between him, John, and me) on order and I've also ordered my first Wave 1 ship. The mighty space-brain is the 10 year old's favourite ship. I don't mind the idea of something with some actual flank strength to mix up my options either. It's not quite as good as a Victory - only one redirect so vulnerable to accuracy tokens - and only 6 hull. It also doesn't have quite the dice the Victory does. However, it is cheaper (I like the B version) and has good shooting when using Paragon out of two arcs combined. Even when not doing that, I can see myself being to use the side arcs for longer than I get to use the Neb B's front arcs. Still and all, I also plan to run a pair of Neb Bs with it.

John already has his own box, Ben has also ordered one, so hopefully the days of 180pt battles are done.