X-Wing Quantity has a Quality of its own 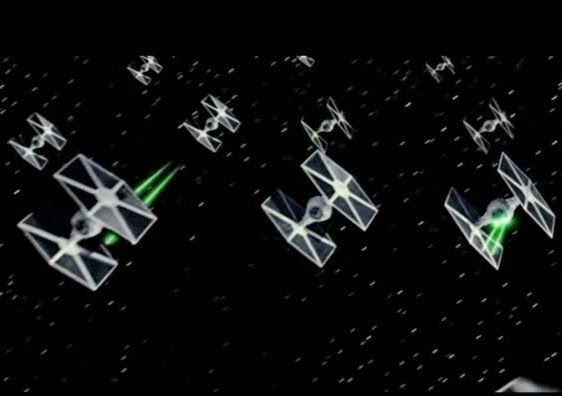 X-Wing is (in)famous for the TIE swarm. It is the ubiquitous Netlist, and every new release wave people's hopes are raised that it will be put to bed. Raised and dashed, generally. I can definitely see the appeal of the list. Lots of relatively tough, if not individually that effective, fighters. In a recent game, I came to the conclusion that instead of my TIE Advanced, I'd have been better served by two TIEs. So this time vs Chris I took my Bounty Hunter in Firespray with Heavy Laser Cannon and five TIEs. That's it, no upgrades. I gave Chris a list built on the same principle. The Chewie Falcon, two Rookie X-Wings and a Protoype A-Wing. Those of you counting at home know that is 101 points. We used the card that will be released with Rebel Aces and allows an A-Wing to lose its missile slot for a 2 point reduction.  I'd take a 15 pt A-Wing over a 12 pt TIE. Neither of us had the combos that usually make swarms work but we did have numbers... 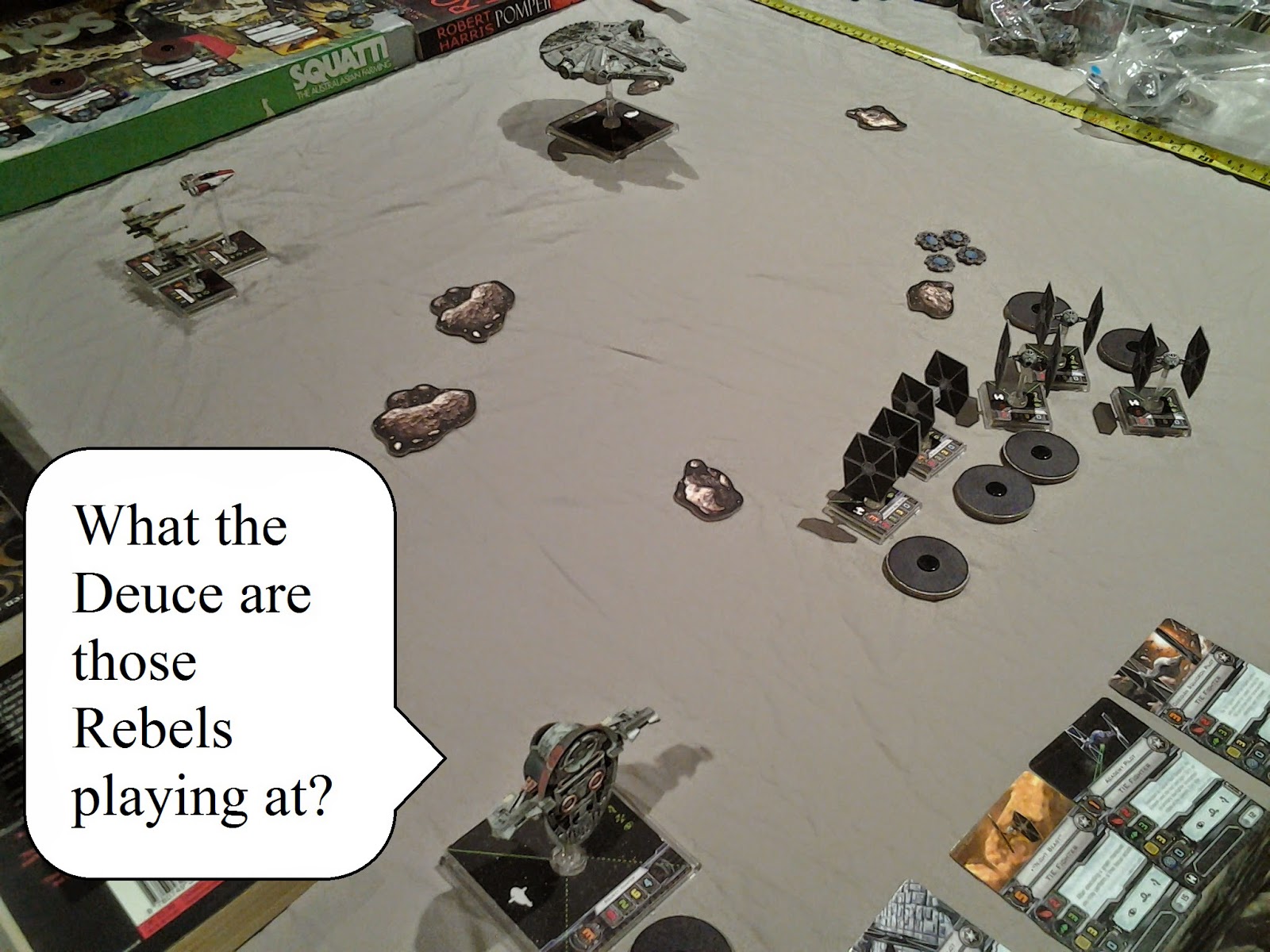 We were at Chris' place. Fighting over this Tatooine inspired desert scape. Since Jason wasn't there to tell me it made no sense, we had Asteroids in exceedingly low orbit... Due to relative pilot skill and equal points, I have 'Intiative'. So it's all my TIEs, then his A-Wing and Xwings, then my Firespray and lastly the Falcon. Shooting order is the reverse of this. 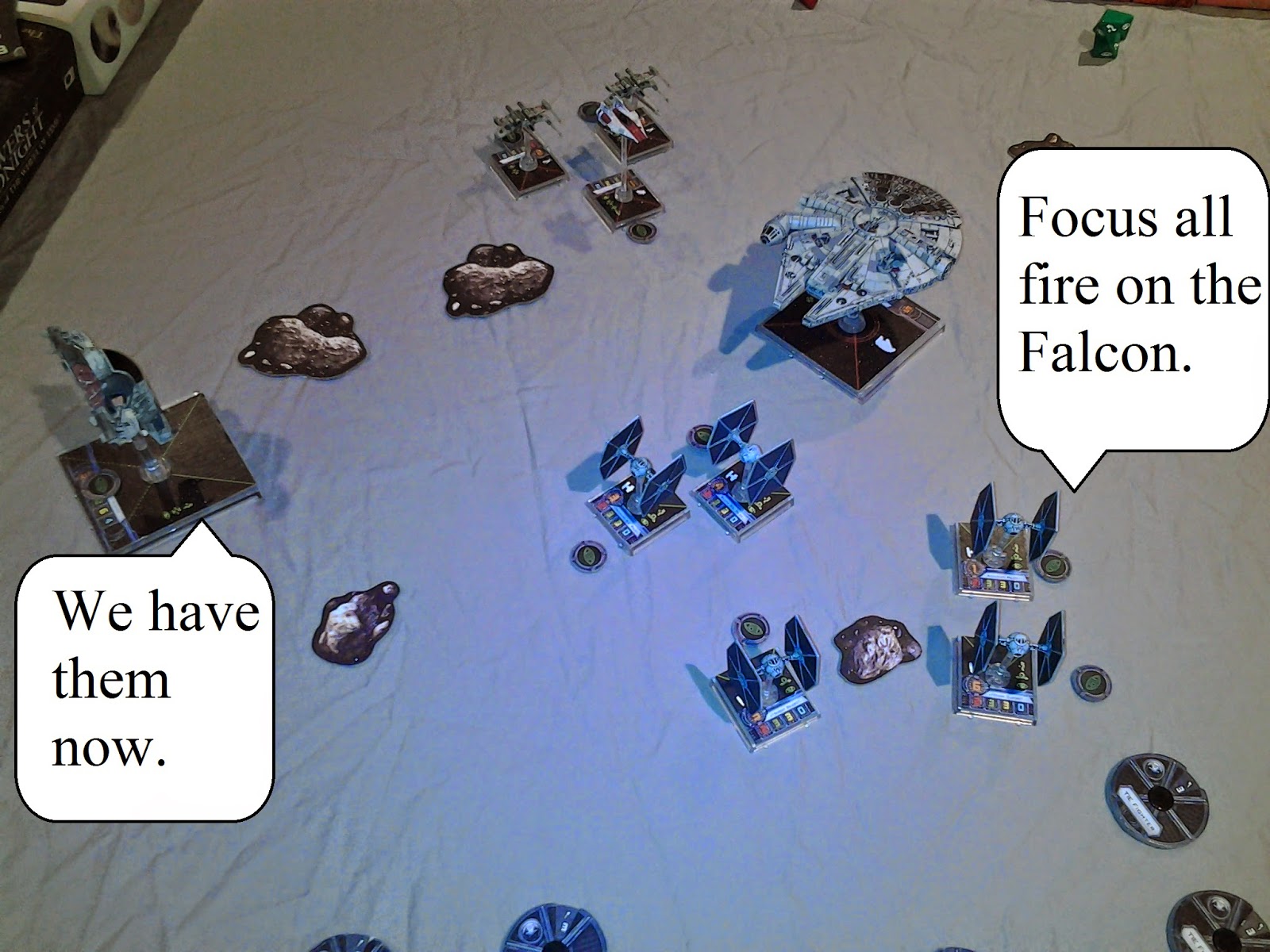 I was so sure I could take down the Falcon. If everyone concentrated fire, it had two turns to live, tops. 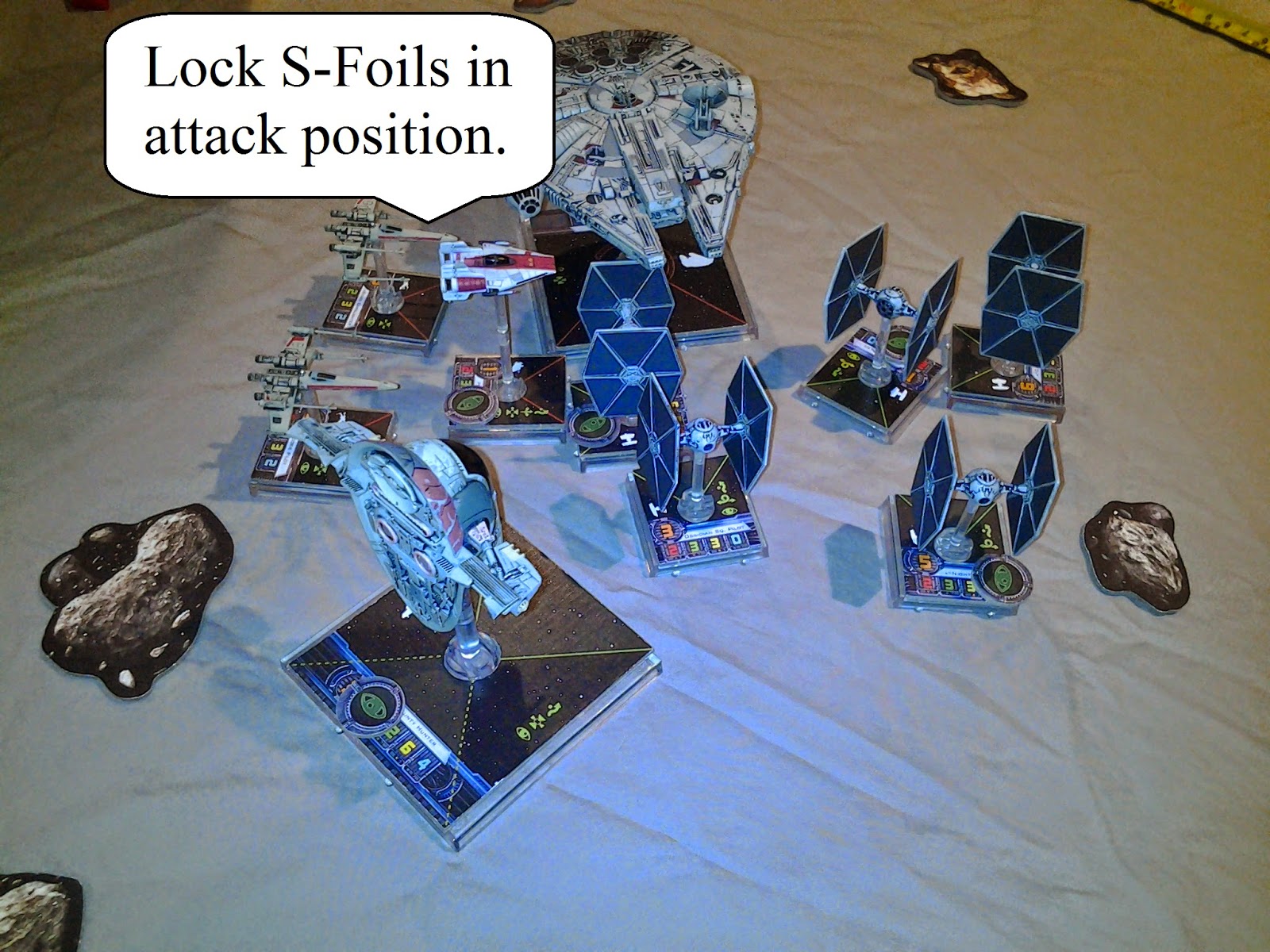 Chris tells me he had originally no plan. I have to admit, the A-Wing led fighter wedge did look cool and was amazingly effective in the close quarters press brought on bymy mobbing the Falcon. The A-Pinned a target (shooting at more TIE pinned behind it), then two X-Wings got to throw dour dice at a TIE. 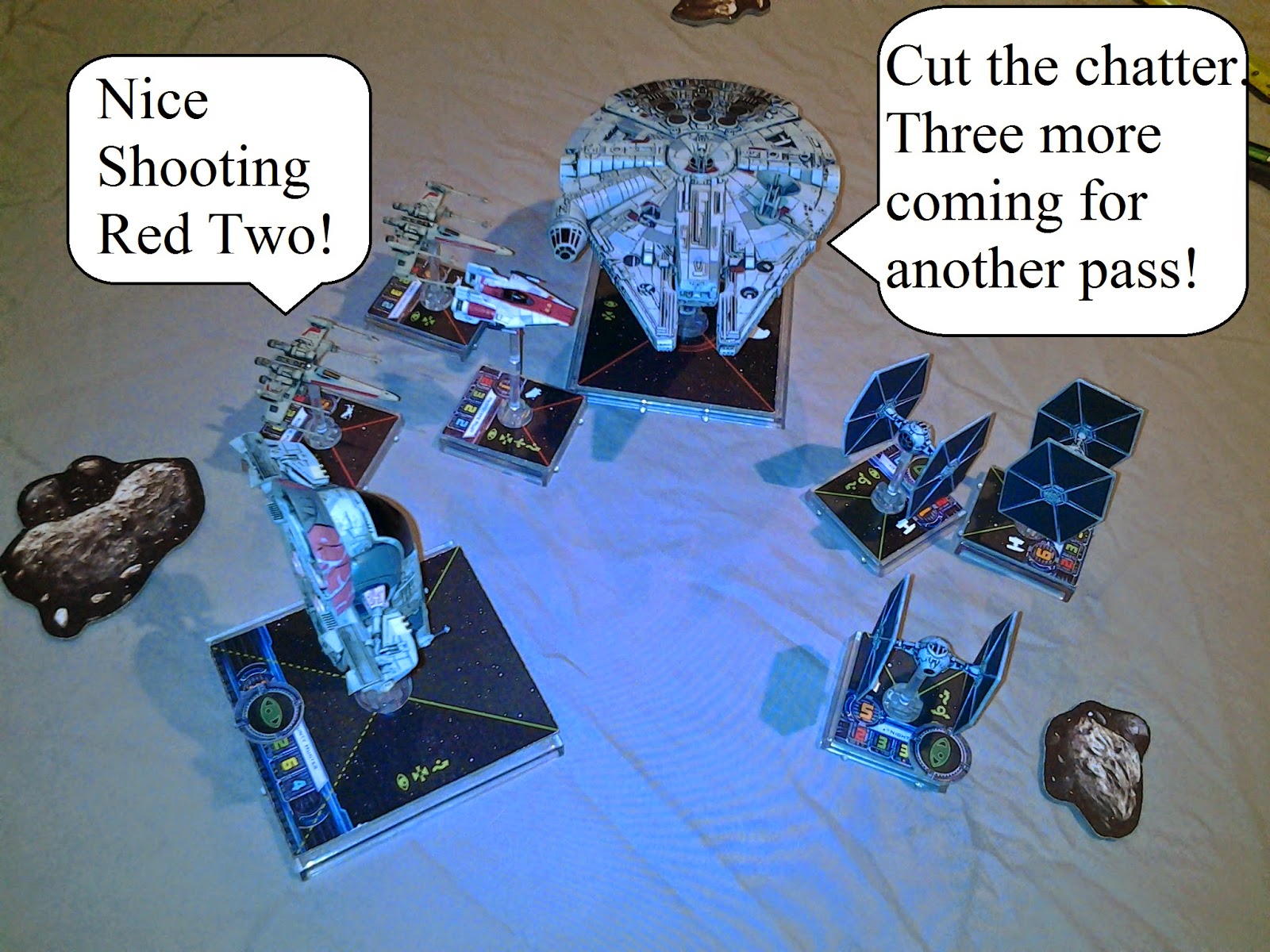 The Falcon did not die on schedule. My Ties, however, die with a regularity that I am unaccustomed to. 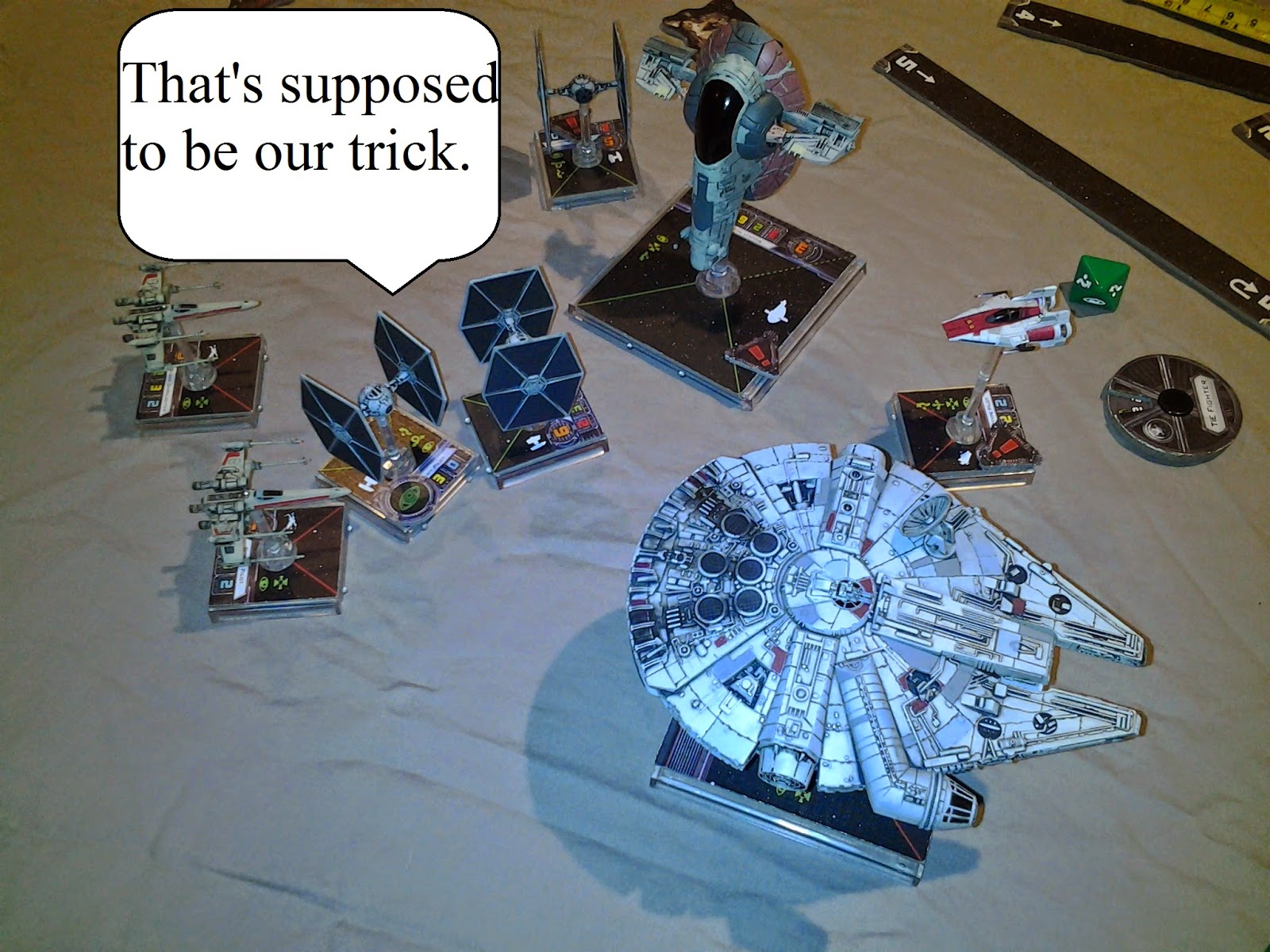 I stuck to the plan and focused on the Falcon over X-Wings but due to the traffic jam in the middle the TIEs never quite concentrated enough fire and the Firespray couldn't snare it alone before it made it through to open space on the other side. Meanwhile, Chris was gleefully kittling up one TIE a turn and focus firing it to death. 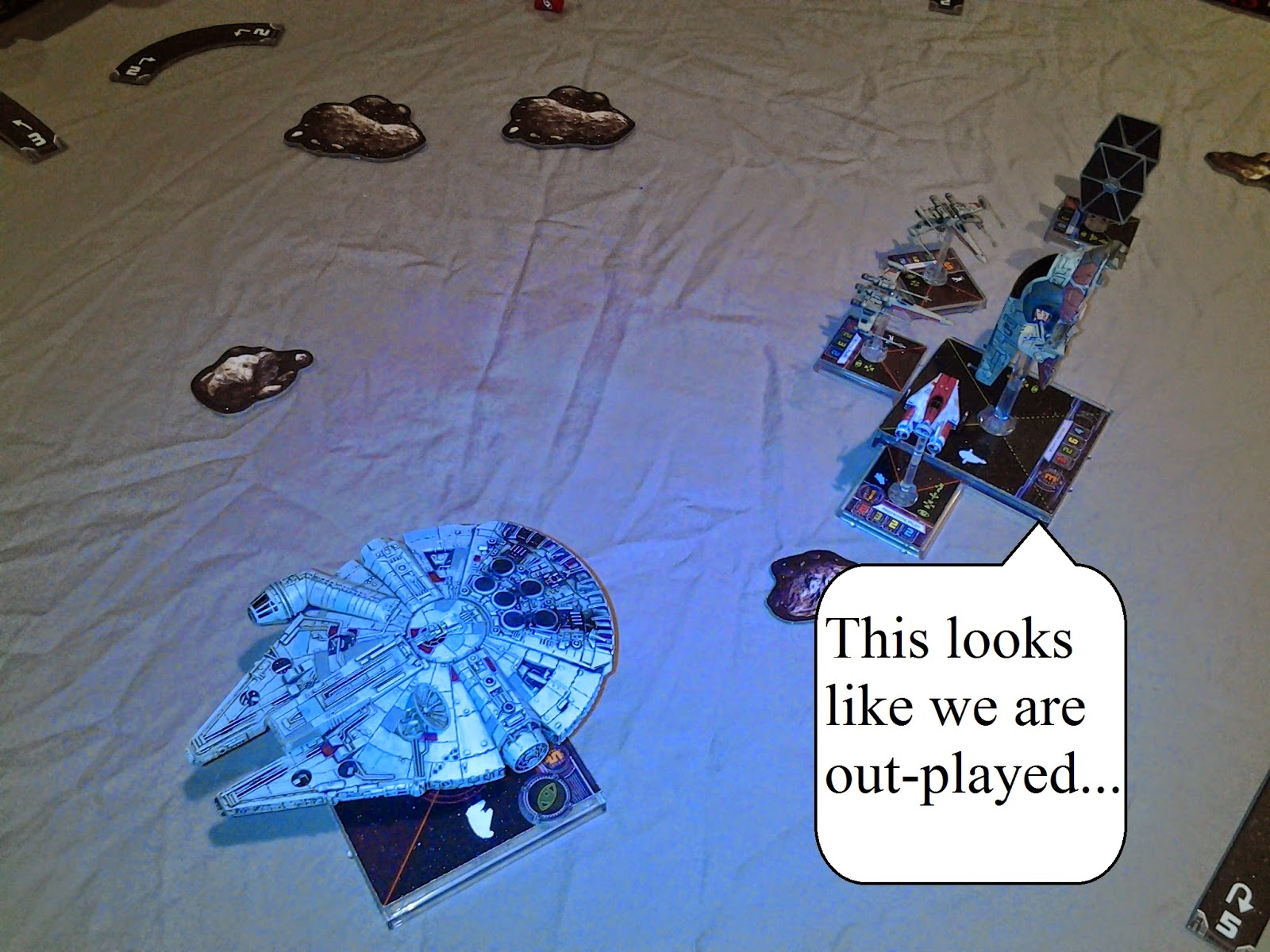 Halfway into the game, about the only thing I could say I had going for me was that as I lost ships, it meant that colliding with me meant that he couldn't kill something that turn. He did have me nicely pinned, while the Falcon legged it. 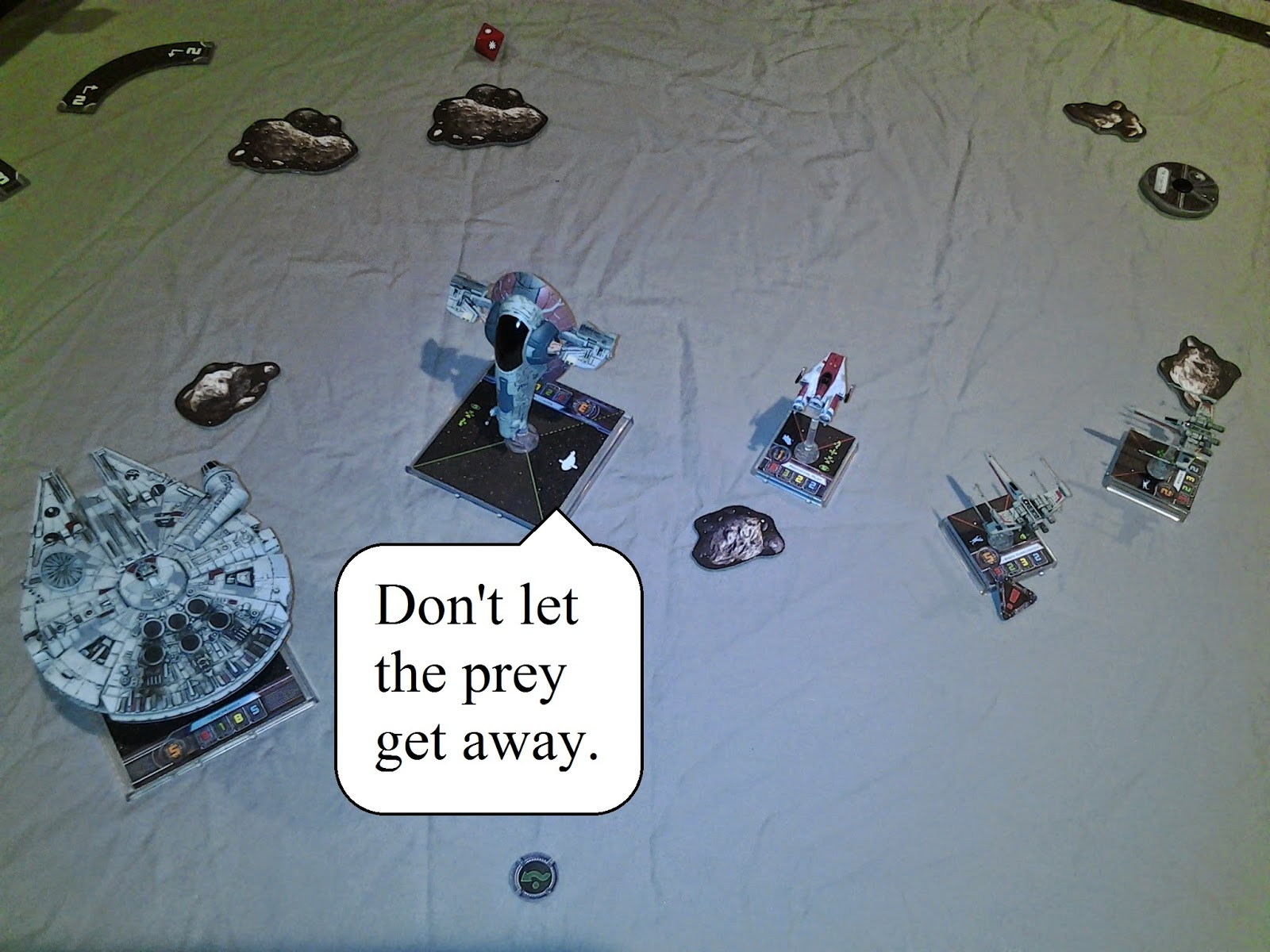 As the Firespray sailed away, leaving the wreckage of my last TIE in its wake, the bounty Hunter was desperately trying to get the last hits with the heavy laser. 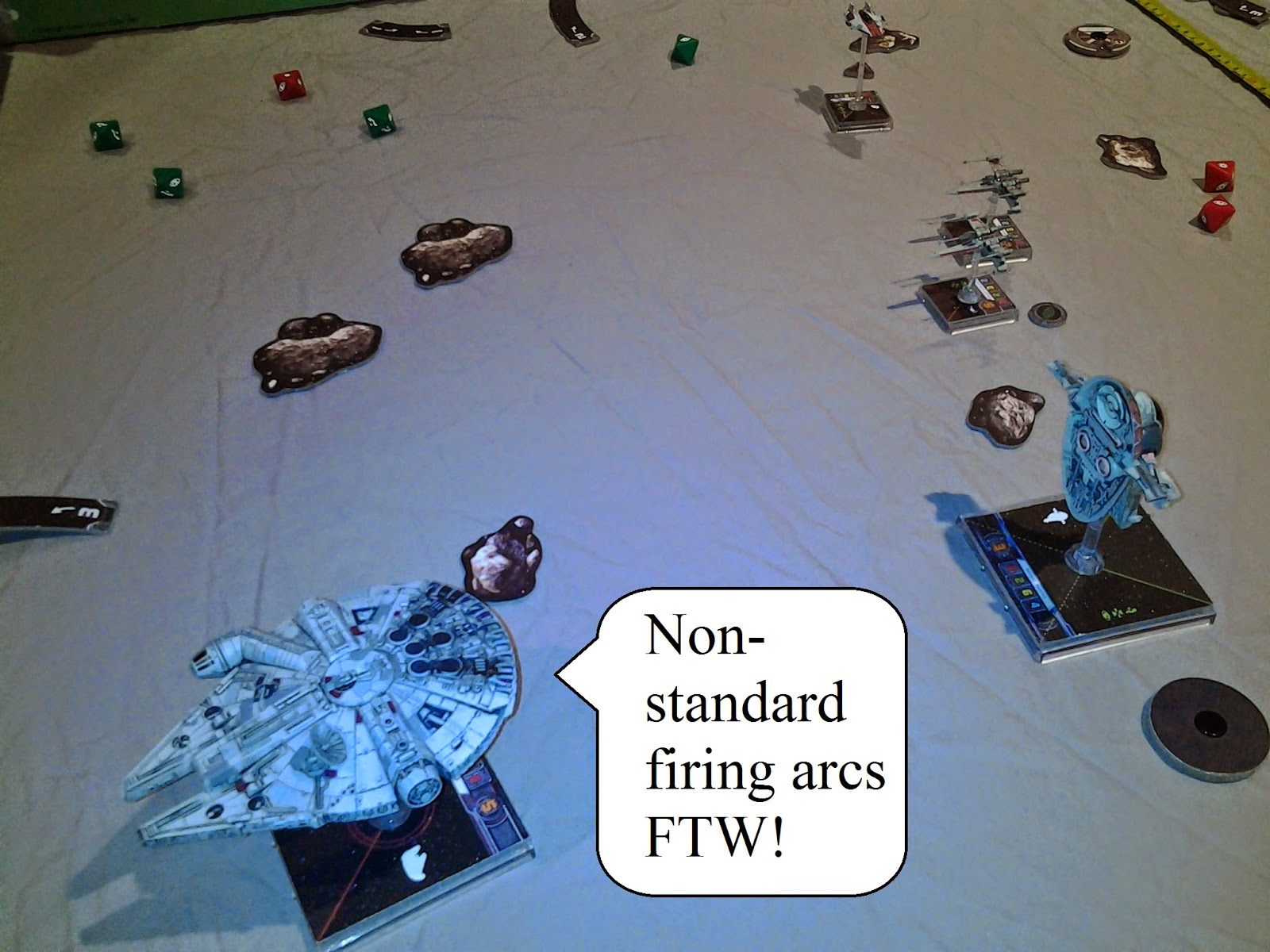 I wanted to open out some space, so we tried it with rear shots this time. I was keeping away from the rest of the yapping Rebel dogs but still losing shields and hull... 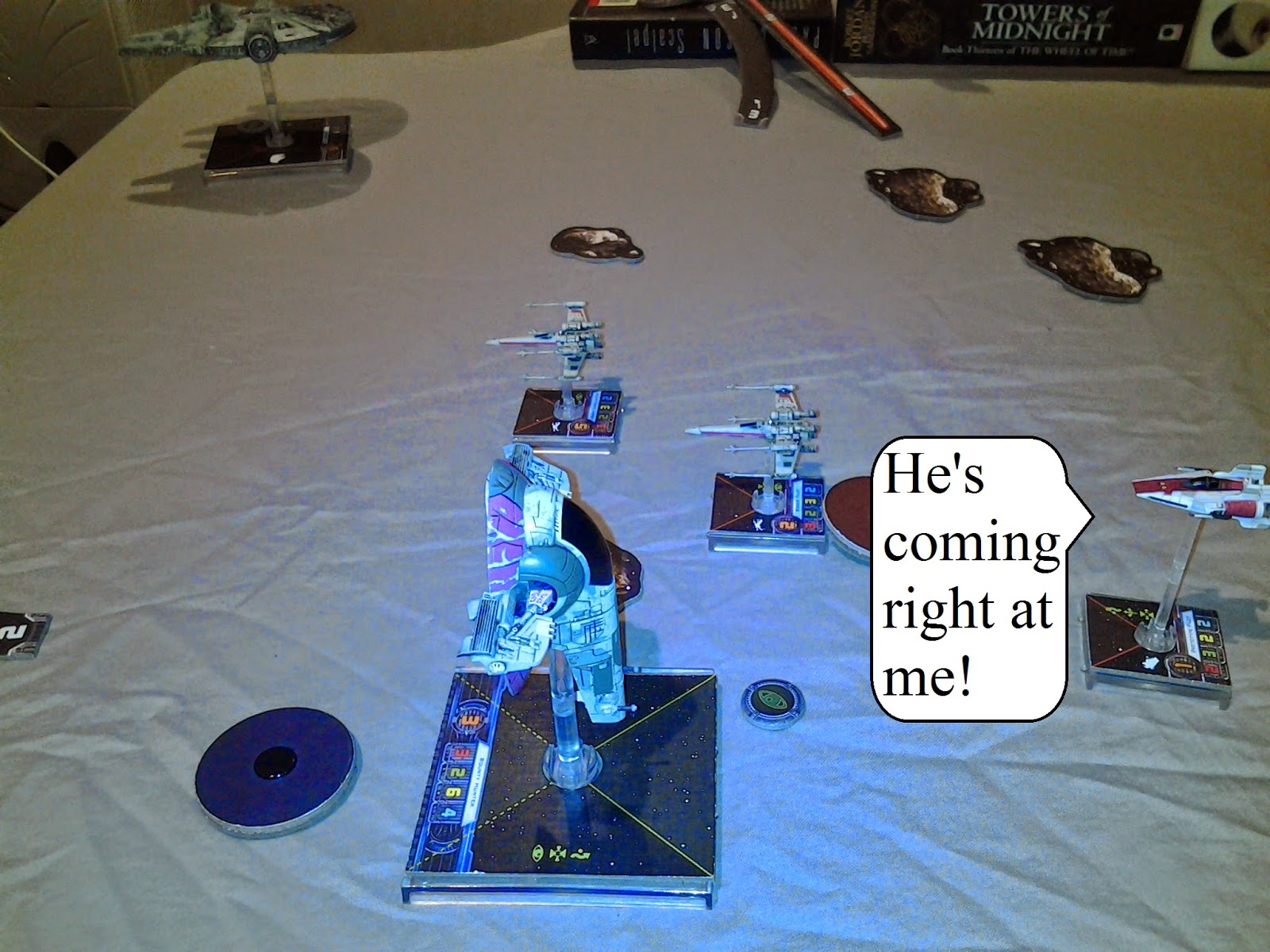 You do tend to run out of space on a 3'x3' table. So the rebels got another pass at me. No shields and even more hull gone. I also apparently cannot hit an A-Wing at point blank range. Imagine a list with 6 of the things? 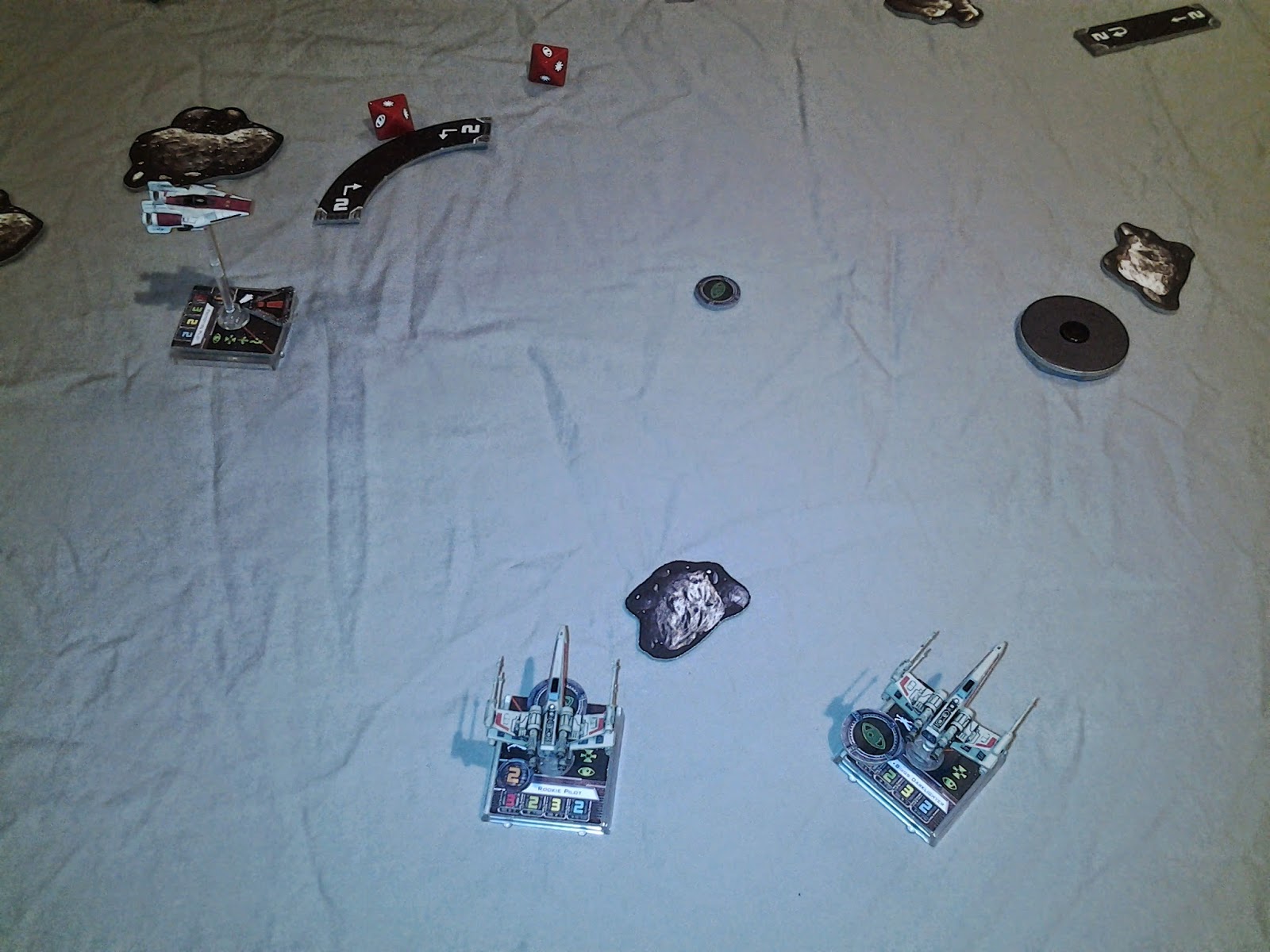 Look what this shot shows: no Firespray but also no Falcon. Yep, I did get my mark, in approximately 5 times the budgeted timeframe. And I lost five TIES and a Firespray in the process. Not my finest hour at X-Wing.

Thanks Chris for the fun game. I did salvage some pride on the X-Box afterward.

PS. There is a local X-Wing comp next weekend. Details C+P from the Chch Wargaming forum:

Then this could be the event for you!

This will be a one day only X-wing tournament held in the Twisted Hop Pub in Woolston on the 7th of June. The format will be pretty loose but will roughly follow the fantasy flight 100 point tournament rules and will feature some custom missions. We are talking very casual but extremely well organised.


I plan to be there. Hopefully will not be too much of a baby seal.
Email Post
Labels: Batrep Star Wars X-Wing