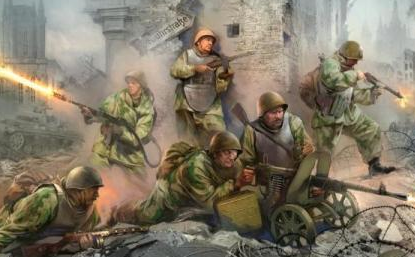 Nathan and I battled it out in an objective based Bolt Action game: His 1000pt German assault rifle totin shock troops vs my Soviet Assault platoon. Both of us have very attacking forces. We used the mission with a single objective and the defender gets two platoons to hold this (the rest are reserves). Since I had attacked last time we played this, Nathan wanted to be the attacker. So I dug in two squads of infantry, forward deployed my Sniper and Arty FO and hunkered down to hold the line at all costs. 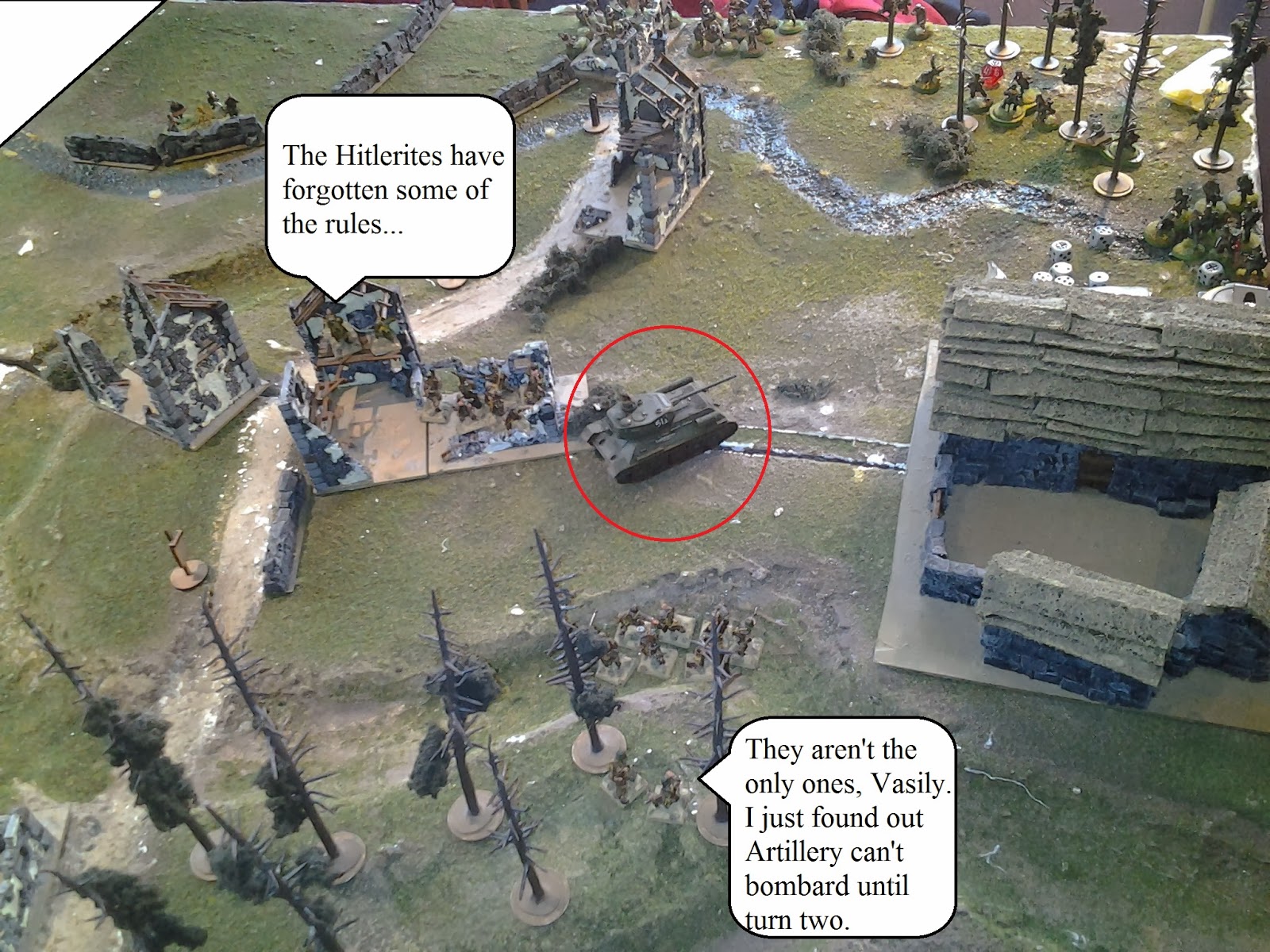 Last time, my guys went down to a vicious series of infantry assaults so I left the T-34/85 behind today and brought plenty of well armed infantry. How well armed? Two squads of assault engineers with a LMG, flamethrower and SMGs, two more squads, another flamethrower team, heavy mortar, heavy machine gun and off-table artillery. Note - a non-German army with three LMgs in the squads. Nathan's army features plenty of assault rifles, a pioneer squad with integral flamethrower, heavy mortar, LMG squad, Pz II Luchs and a Pak 40. We were well dug in near the objective. The plan was for the lead Vet squad to go 'down' almost all the time and let the sniper plink away while I got the arty to range in on the attackers. 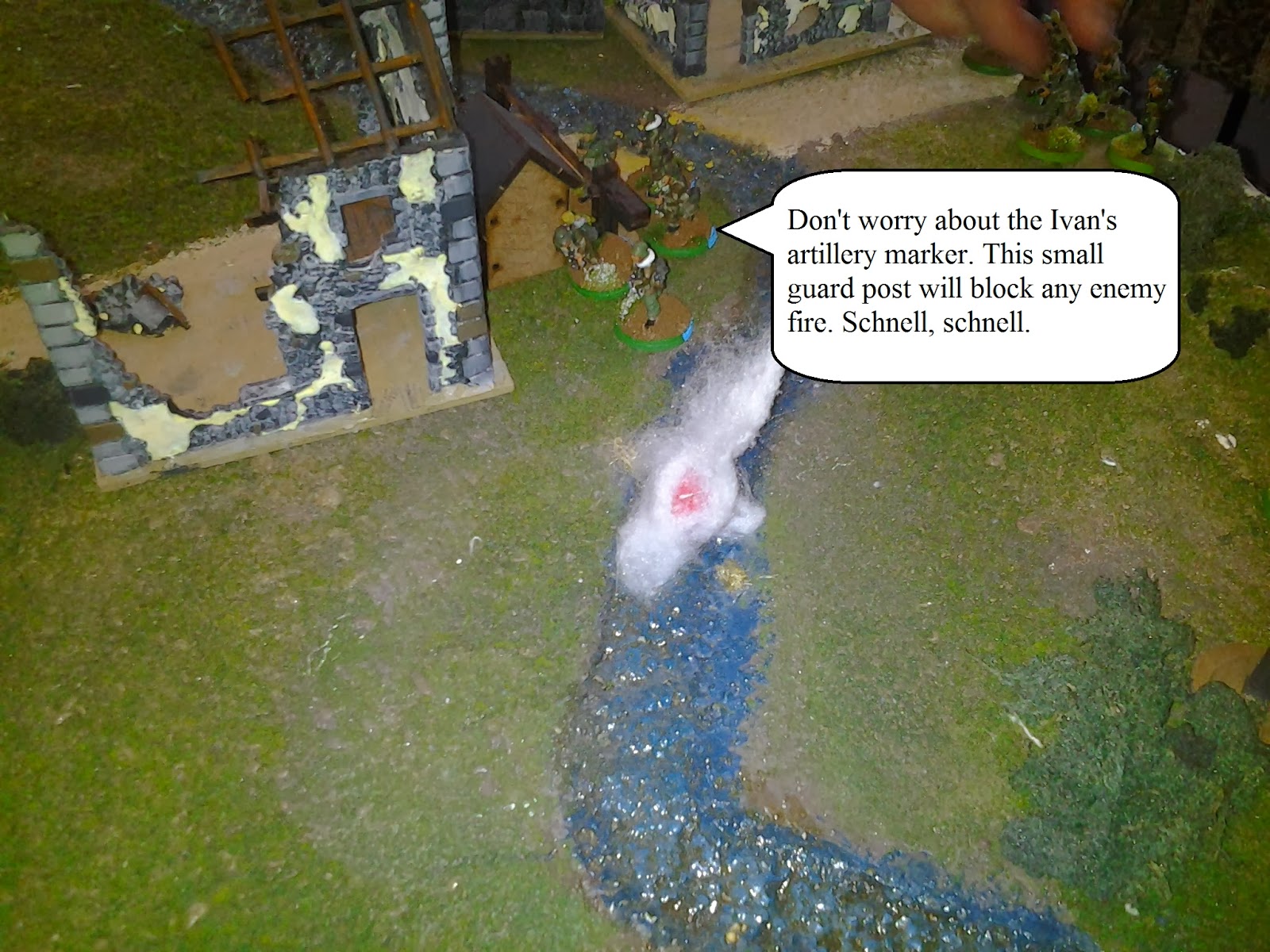 The German attackers initially showed a lot of guts. I ranged the arty in due 'north' (in relation to the Objective and our positions) - right where the German infantry would be aiming to advance. I was a bit hazy on how artillery barrages worked as the first time tried them (my defeat, last game vs Nathan) I lost the FO early. I haven't been able to read up as I can't find my rulebook anywhere. Perhaps loaned out? 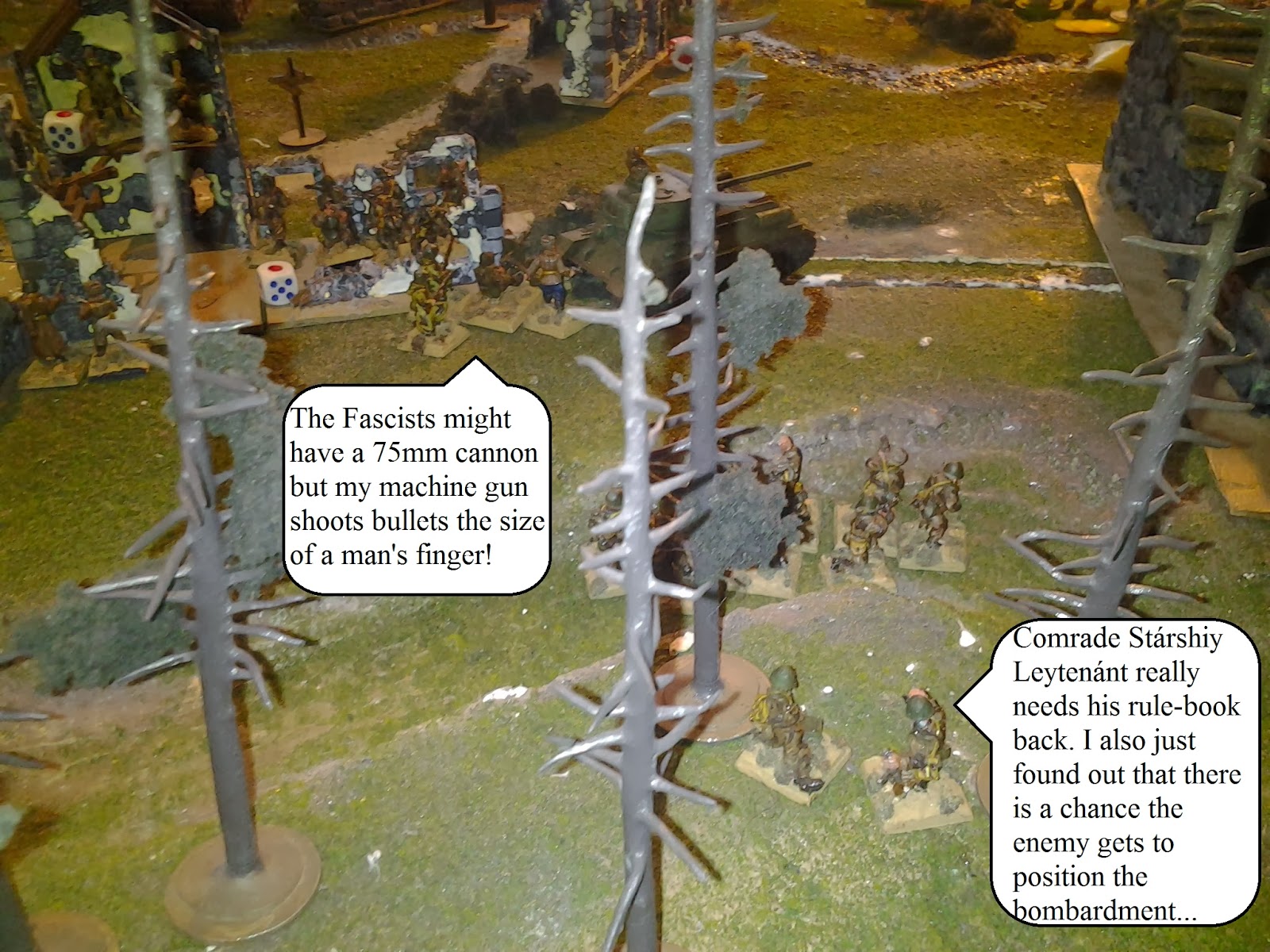 'Interestingly' it turns out that if you roll a '1' in any turn, your opponent gets to use it on you. Reminds me of taking Sturmoviks in V1 Flames of War! Ouch. Hope that doesn't happen. Reading the rules, the Arty you pay for works pretty much like the free bombardments you get in some missions: highly unlikely to kill anything but will inflict a few pins here and there. 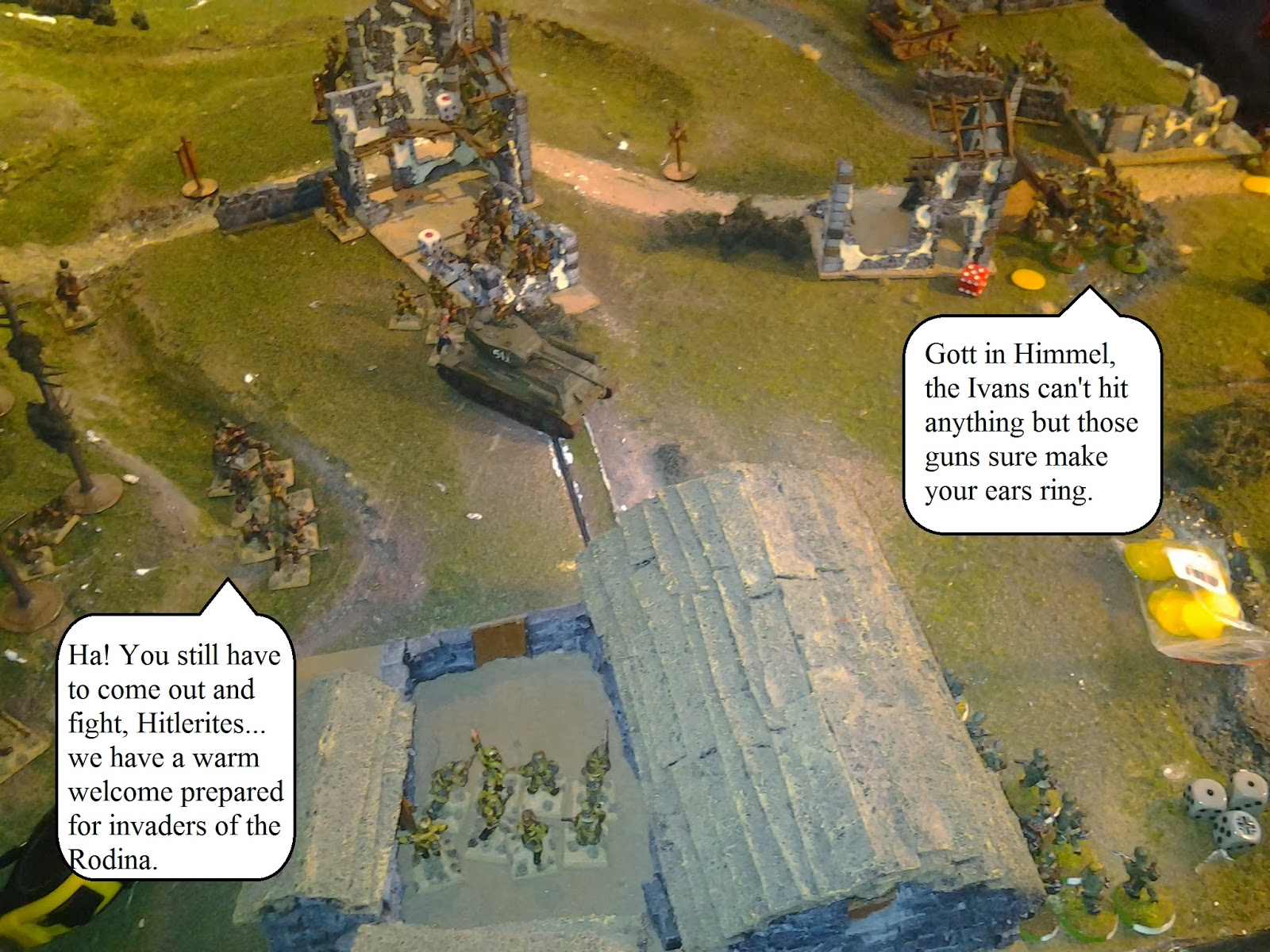 Sure enough, when it came down, I killed nothing. However I did get pins on three enemy units and the knowledge that this was coming kept the German Pak 40 back in reserve. Nathan had moved his heavy mortar up but re-learned a rule of his own: snipers kill team weapons in one hit. It was a big relief to not have to worry about a 2D6 HE weapon slowly ranging in on me as the Germans crept toward our lines. By this point, I had run up all my reserves (save the free Inexperienced Su-76) and had multiple squads of infantry behind the objectives and my own heavy mortar and HMG in place. 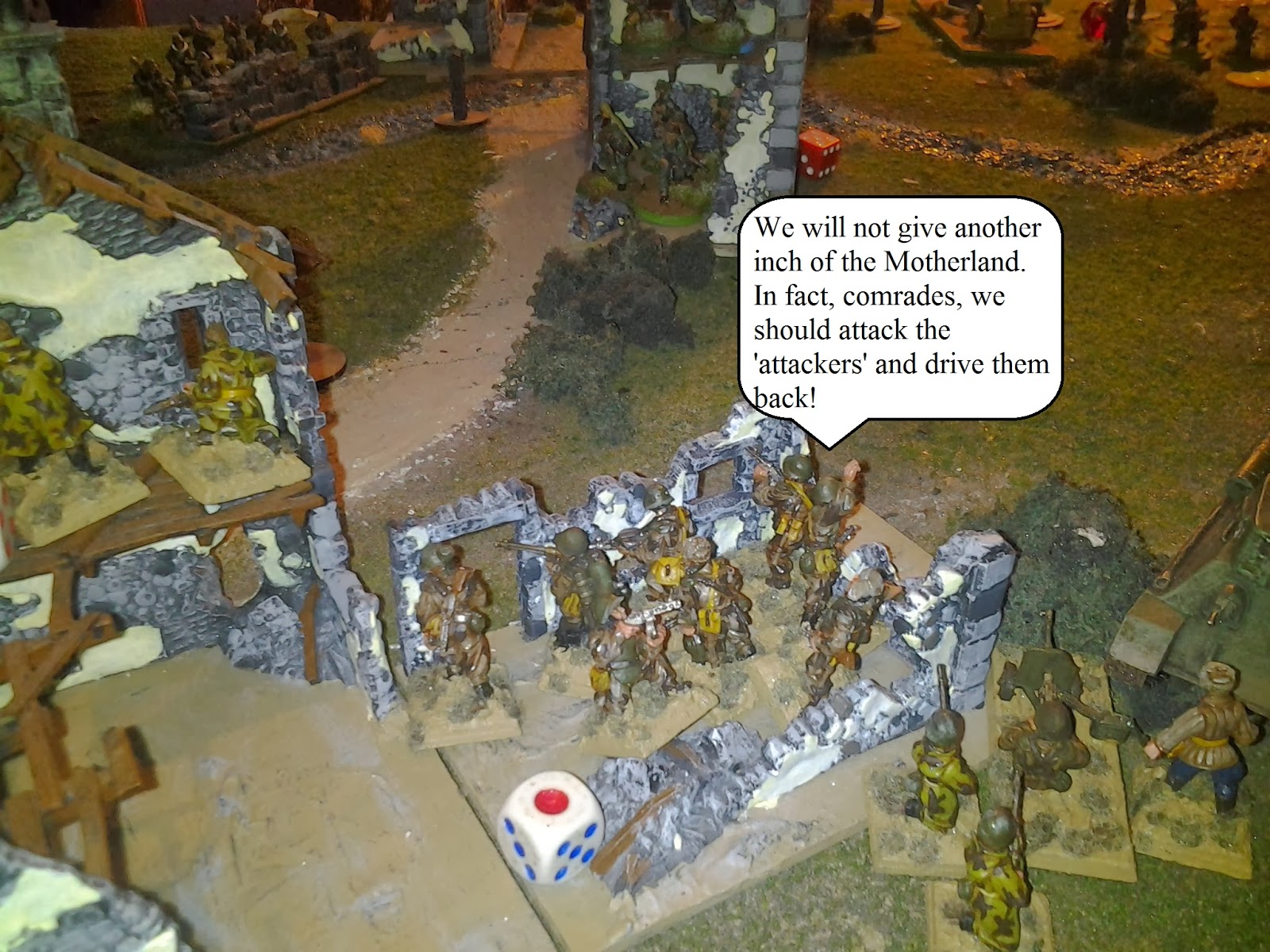 Then there ensued several turns of brutal shooting exchange. My heavy mortar went down to the Pak 40 without every getting to hit anything and the assault rifles were murderous. I had two turns where going 'down' saved me, then I started losing me. On turn four, I decided to have the reduced squad take their flamethrower up and return the favour on the closest of Nathan's assault rifle units. The Germans were decimated. I then had a fresh unit of Assault Engineers occupy that position and further reves move up to support. If Nathan wanted to shift me, he needed to get to it quickly as there were only 2-3 turns left. 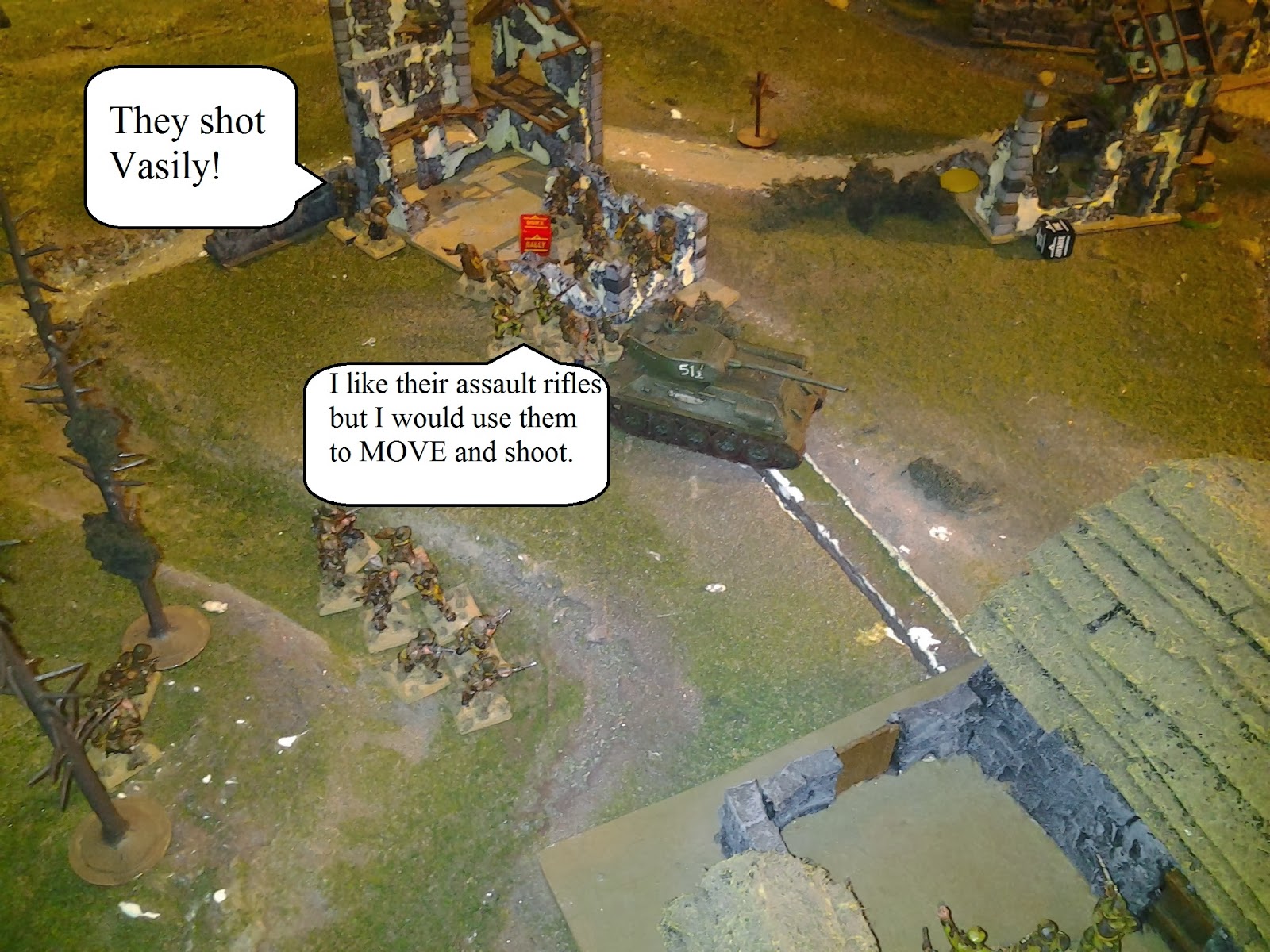 The German attack was seriously bogged down though. Having learned my lesson last time, none of my units were in single turn assault range of the enemy (save the squad on the objective, which was flanked by three supporting units). So Nathan would actually have to risk something to attack me. It looked like killing me at over 1 foot range with Assault rifles was more his style. But.... didn't he choose to be the attacker? 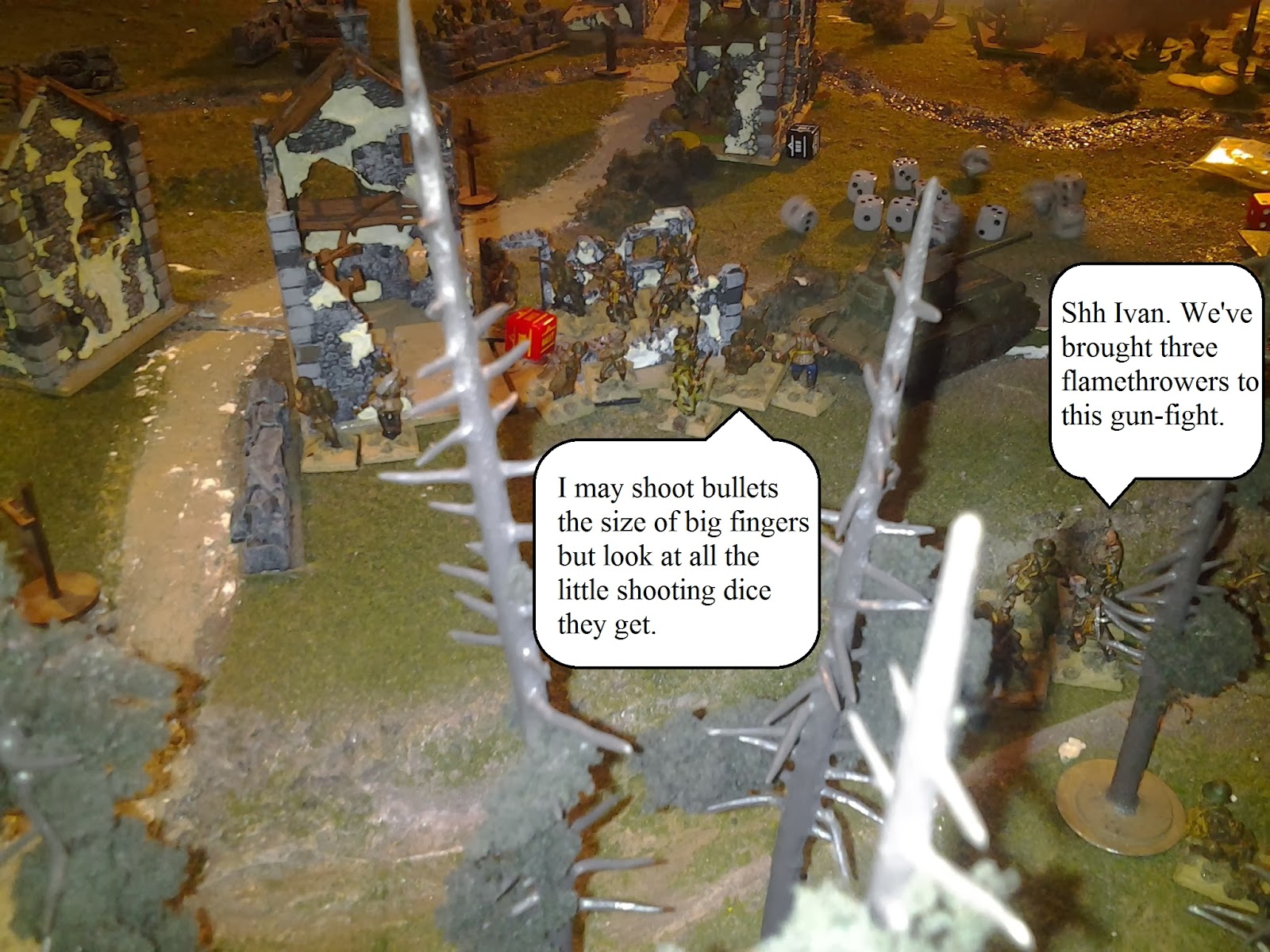 I can understand his reluctance though. We were both so heavily armed that an all-in infantry fight would be brutal. The deterrent value of the flamethrowers was working especially well to keep him back beyond 1 foot. I had lost all my long range assets save the ever inaccurate SU-76 so it might have been more comfortable to stay safely out of reach where I couldn't hurt him. I did go after the one unit that dared to come close and made an object lesson of it. My real worry was if Nathan decided to crash his Luchs into the Objective on the last turn and if I didn't dislodge it, we'd get a draw. 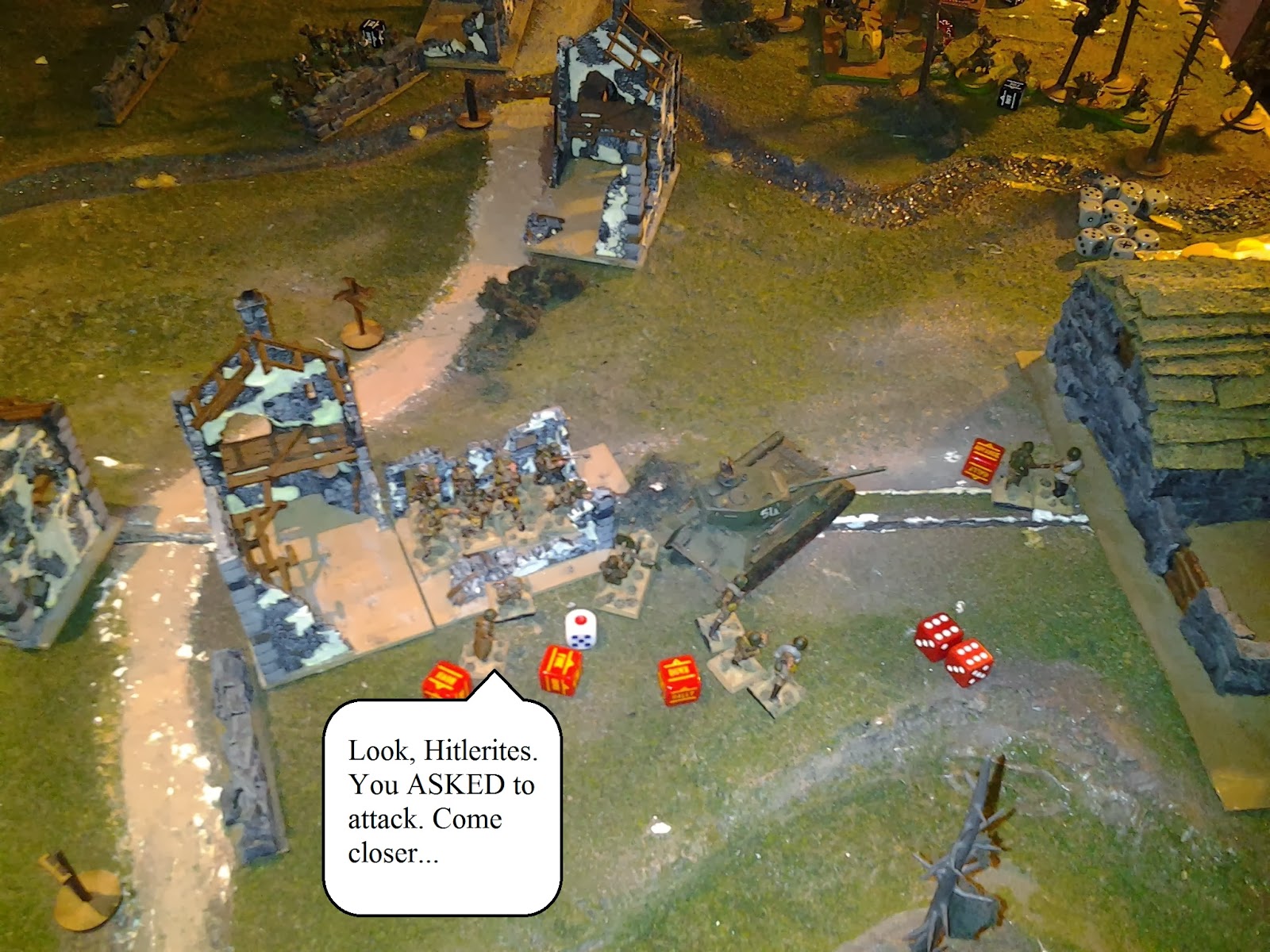 He didn't do that though. So I only got to fire a single flamethrower and never even got to see Nathan's used in anger. On the off chance there would be another turn, I did send the flamethrower team just in range of his pioneers so that either he would rush in front of all my forces to destroy it or be forced to back off further. It wasn't needed though: Turn 6 saw my defenders successfully holding the objective. It had looked shakey in the middle, as I had got some early hits in but then started losing key units, but the attackers never closed the deal. So my fears in the late game were only that I would be cheated and get a draw.

I'm much more pleased with the defense I mounted this time. I prefer to attack but defending really suits my shorter ranged weapons well. Maybe I need to get a ISU-152 to really reach out and touch the enemy army?