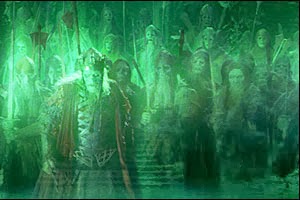 When Andy was over giving X-Wing a spin, we decided we really needed to make WOTR happen. The 'Desolation of Smaug' had got Andy quite enthused as well, since this does showcase Dol Guldur. We'll leave my personal opinion of that movie to one side. Last year, Andy and I playtested some 'War of the North' lists. In my (absolutely non-biased) opinion, these lists made the game work a LOT better. However, I really miss my army of Gondor (or oftimes 'the Reunited Kingdom'). So Andy used the Dol Guldur list that we'd done and I just took the Gondor list, bumped the cost of the 25pt infantry up to 30pts, used the houserules, and once more Thorongil went forth in the service of Echelion II to strike at threats to the Kingdom of Gondor. Afteral, the Necromancer of the Hill of Dark Sorcery was but a charlatan and his Orc rabble could be crushed easily by the Men of the West...

I write to you, Lord Ecthelion, from the frigid eaves of the forest of Mirkwood. Thorongil had led the winding trail of our armies many weeks on the long march north. There we found scant sign of any men. Where once there were proud kingdoms of our lesser cousins, Easterlings, plague, and Orcs have all but scoured the land clean. We cannot even reckon on the aid of the Silvan Elves of the Mirkwood, as they are a Fey and unpredictable folk. In the event, we did not even make the thickness of the forest itself, as the enemy host came forth from the forest to meet us amongst the ruins of one of the outposts raised by our people in the time of Valacar. The vanguard of the enemy force gave us pause: not Orcs, not Wildmen nor Spiders.... ghostly legions and armoured spirits marching forth.

At the head of this force bestrode a great shadow, at times wreathed in flames, at times sucking the light from about it. At the sight of this apparition of evil, a murmer of discontent rose up amongst the the men. We all knew the jealousy Denethor, the Streward's son, holds for Thorongil; and the fact that Thorongil was here leading the army of Gondor rather than Denethor had been a festering wound as we marched northward. In fact, it was only the presence of the son of the Prince of Dol Amroth, Amrahil, that had cooled the more hot-headed malcontents. And now the men were to be asked to fight evil spirits in the cold snow, long from any hearth or comfort....

Thorongil had laid his plans well though. The skilled Rangers of Gondor had cloaked themselves in white and infiltrated ruins at the flank of battle. On either wing of the battle-line, he had set mailed heavy cavalry to envelope the enemy. Thorongil took command of the centre, Amrahil led the Knights on the left and Erkenbrand the Rohirrish cavalry to the right. There was a large area of largely intact farm walls near the centre of the Gondorian lines and these were quickly occupied by our men at arms on foot.

Though Thorongil had laid his plan carefully, dissension amongst the ranks meant that the men were hesitant, constantly sacrificing the initiative to the enemy. The enemy indeed came quickly to root these men out. Heavily armoured Orcs, led by some Twilight Wraith who sapped our courage with his fell sorcery, and ghostly infantry on either side. Over confident in their ability to hold, the Gondorian commanders had not reckoned on the dealdy cold grasp of Dol Guldur's spirit legions.

These spirits glided easily through the ruined walls and slew Gondorian soldiers while though fought determinedly to fend off the armoured Orcs to their front. The valour of men was not equal to this task and our soldiers were sent reeling back in disorder and dismay. It was all their Captains could do to preserve order and prevent out right flight.

Determined to not let this insult stand, Thorongil set forth with the second formation of our Warriors to defeat another horde of Orcs, who were wielding great weapons and had used a large ruined tower to hid their advance on our line.

On the left wing, our defeated men had rallied, while the Men of Lossarnach made ready to prevent further advances by the enemy. Amrahil led the Knights of our White city in a wide flanking maneuver so as to pin the ghostly warriors between his lances and the blades of our axemen.

Yet despite all our valour, our arms, and the might of our commanders, what answer did we really have to that swirling tower of shadow, fire and malice?

If Amrahil ever felt fear, he did not show it. He led our Knights in a cushing charge on the ghostly troops before him. Insubstantial as they were, they were swept, scattered and cast down before the weight of the charge. Once every last ghost was banished, Amrahil skillfully wheeled the Knights about to avoid the Orcs skilking behind the wall and took count of his losses. Only a single man had fallen! A cheer went up along the line. All doubts seemed dispelled.

On the center, Thorongil sought to slay the Orcish Captain but was unsuccessful. In fact, such was the weight of the enemy numbers, the men of Gondor were once more forced to give ground and fall back.

Then a cry of alarm went up from the rear of the formation. Swarms of evil spiders had crawled forth from every crack of the nearby ruins, dread armoured spirits came forth from the ruined tower. The arrows of the Rangers were useless against the spiders but actually managed to bring down some of the Spirits.

Thorongil had retired from the press of melee to rally the Axemen and other warriors to join him in his hunt for the Twilight wraith. It had gone almost unnoticed, such was the dread inspired uy the terrible thing leading the enemy. However, the lesser wraith did ever sow fear amongst the ranks of our men and then turn this fear into death, inflicting on them fell visions of woe with his dark sorceries. Thorongil failed to defeat this Wraith, despite issuing a challenge heard across the battlefield. Likewise, Amrahils men were quite unequal to the task of rooting the Orces from their walled position. It was left to Erkenbrand to sound the horns of the Rohirrim and ride once more to Gondor's aid.

And great was Gondor's need in this hour. The unexpected skill of the enemy Wraith had caused such a rout amongst Thoringil's company that he only held them in the fight by the slimmest of margins.

Unbowed, he once more issued his challenge to the weakling wraith but, urged on no doubt by the foul Necromancer it served, the Wraith only gave a rictus grin of derision in response and gathered more orcs about it. So the stage was set for the climax of battle. Erkenbrand had continued to press the enemy flank and was in the process of driving the Castellans of Dol Guldur from the field. Likewise, Amrahil had positioned the Knights of Minas Tirith to catch the Orcs from the rear. They had only to avoid the grasp of the Necromancer itself.

Whatever Orc the Necromancer had leading it's warhost was not without a certain low cunning. While Thorongil charged the weaker Orcs to his front, the elite Orcs of the Tower caught the line of men in their rear. The courage of men began to fade as, beset from all sides, they saw that no aid would be forthcoming. Erkenbrand's knights were occupied with the Catellans and Amrahil's were caught, unable to muster a proper charge, and Amrahil himself saw the Necromancer bearing down on him.

Thorongil proved his reputation well earned, as he finally did lay the Twilight Wraith low. However, his men were lost completely this time and he was unable to stem their rout. As they fled, Amrahil was left to an uncertain fate. He had avoided the grasp of the Necromancer for now but had likewise proven unable to land his own blows.With the infantry fled, he and Erkenbrand were left to mount a desperate rearguard against the relentless enemy. I trust, my Lord Ecthelion, that you can forgive Thorongil this failure and will not be swayed by your son. No one could have defeated that Necromancer, it was a foe beyond any of us...


It was great to be playing War of the Ring again! Even losing, I had heaps of fun, so thanks Andy. We really need to play more as both Andy and I were actually reduced to looking up basic mechanics in the rulebook. One basic mechanic, priority, was my constant enemy. Andy had this every turn. So I got to go first. This was good for getting the charge with cavalry but meant that the army of Gondor never got to combine it's attacks properly and was often wrong-footed by the enemy. Andy used this well and my infantry, who are afteral amongst the best basic troops you can get in this game, were soundly defeated in the centre. Even toned down, the Ringwraith was a potent force and likewise, even the boosted spirit troops were far from invincible. I need to play the new game we've made a bit smarter too, I definitely need more Captains as the Epic heroes can't be everywhere and their courage and Will of Iron rolls are key. Hopefully this has got us inspired and we can make WOTR a more than annual event?