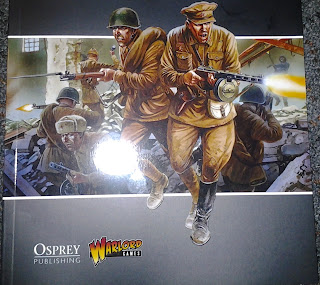 Look what arrived in the post yesterday. Salute, the massive London Wargames convention, was last weekend so all our pre-order books also got shipped just before they were packed up to go. These days, my orders from the UK seem to be arriving in four, or so, days. Pretty impressive. What's more impressive though is the book and the free mini I got for pre-ordering. What I have really liked about BA is that the core statlines are so simple but I was impressed with how small additions to the Soviet list have made a real difference - both in units that needed it (SU-76/ZIS-3) and in some of my favourite units.... 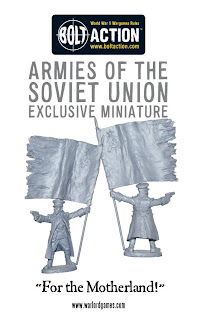 First up though: the free miniature. It is surprisingly hard to buy a single 28mm Soviet flag guy. So I am pretty pleased to get this as a bonus for a book I'd have been getting regardless! 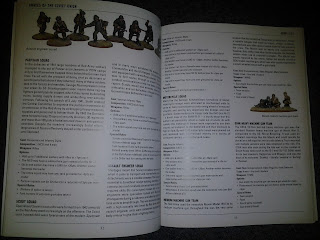 What I was really waiting on though was proper stats for my Assault Engineers. Oh yes, +5pts per man and they have their body amour. This only helps them vs shooting (-1 on rolls to kill them vs small arms so halving the result....) and they lose the ability to move 12" when running. So they are now dead slow. Interestingly, you can buy Tankodesantniki teams equipped with this. this is something I wasn't really aware of and I don't have mounted models for it but seems like something I will definitely be trying as it is the perfect way to give them their mobility back. The assault Engineers also get to have integral flamethrowers. I have the the models for two squads of these.

I like that the list is already making me want to get new things I didn't originally intend to pick up. With a few notable exceptions, this isn't really an army book that has a whole swag of new rules, more something that fleshes out the list with more artwork, options, and suggestions for units modeled on iconic battles (the 'theater selectors'). 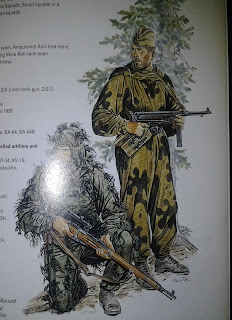 Those who know me, know this is my favourite Soviet unit. The Razvedki (who later became Spetsnaz). I've been using these guys as long as I've been playing WW2 games. While the V1 web-page Motosikel Rota list probably still ranks as my favourite rendition of them, I do like them in this new Bolt Action book. In this book, you pay a point per guy and in return they deploy like snipers or spotters (so anywhere in your half of the table, outside 12" from the enemy) or get to ignore the penalty to order rolls when coming on from a flank. Pretty characterful rule. I think I will be taking two squads of these too. 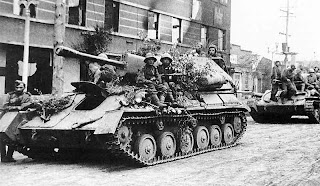 Another area I am glad to see getting the attention is the ZIS-3/SU-76. These units have never worked like they should in FOW. Initiatlly it seemed BA was going to have the same issue but now you can pay a small points premium (optional in the case of the SU-76) and they gain the ability to fire like a medium ATG. So now they work like they should. I am seriously considering getting a SU-76 aka 'Suka' (aka 'Bitch') for my 28mm forces. It is a damn fine looking piece of Soviet machinery and as the second most-produced AFV (after my favourite Soviet AFV), it seems like something I should have.

That's not really a 'review' of the book - more a set of impressions but I can't wait to try some of the new stuff on the table.
Email Post
Labels: Bolt Action Musings Soviets WW2