Well, it's that time of the year again: Flames of War at Conquest 2012. Last year, I ran the army thing as a poll and the masses decided 'lots of tanks'. We are between elections now so the plebs get no votes and it is more of the same - lots of tanks.

There were vague murmurings of making Conquest yet another open field late-war event. Fortunately, there was a surge of support for Craigs (?) suggestion that since this was pretty much the Anniversary of El Alamein, we should play El Alamein.

To fully gauge how much I did not want to have to play late-war, please cast your mind back over all of my Flames of War Armies that you may have seen. Notice a theme? Yes distinctly winterish (I suspect Craig expects me to still field the DAK Panzers in Winter camo) and always Ostfront. However, I wanted to play mid-war so much I committed to a new tropical MW army from one of the 'other' fronts.


I will be running a force based on 15 Panzer Division. I have used an available OOB to limit my choices to what there would have been for the battle. There was a little initial back and forth but the consensus settled on: No Gun Stukas, no Pak 40s, and no up-armoured Pz IVs and IIIs. So I have gone with a mix of Pz IV F1s and F2s (though one less F1 than originally planned, see above OOB) along with supporting Pz IIs and Me-109 Air support. The general idea is to use the more fun version of theme, that is: we aren't trying to show-horn people's collections into a 1:1 representation of the various forces but neither should there be more of anything than their actually was at the battle. 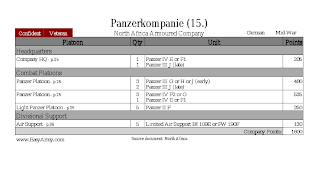 Why 15 Panzer? Well they pretty much got annihilated in-theatre so I thought them the perfect fit for my typical (well not that ONE time) Conquest performance. 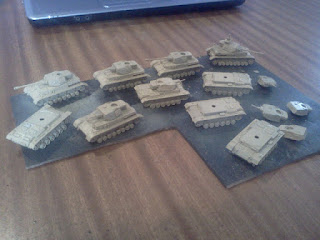 Progress so far? This lot. Note the conspicuous absence of Pz IIs, Me 109s and one of the panzer IIIs. They are at least on order.... hope they get here on time.  In my defense, two young kids + a newborn has proven surprisingly time/energy consuming but I think can't lean on that excuse any longer. The TO asked last night (prompted by me) who actually had desert terrain to contribute and there was an audible sound of crickets chirping. So in addition to the lot above, plus those to come, I will have to make some terrain to contribute at least one table. Easy, there are two whole weeks and two weekends left... 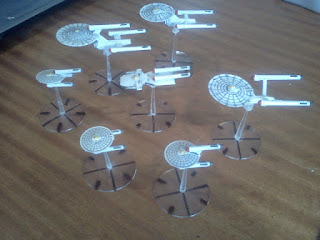 Sure I am leaving it to the last minute but I got distracted. I got my new ships assembled and basecoated last week and had a great game vs Chris, who used some of my other ships as Orion Pirates with all of their optional mounts turned into guided nukes (drones). 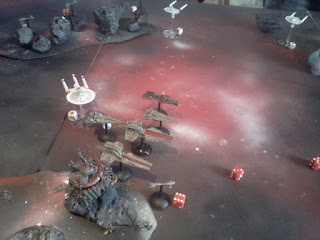 It makes sense really, as these were an Orion Cartel operating on the Federation-Kzinti border (formerly Kzinti Space) and so equipped with Kzinti Kit. I got crushed this time out. Chris baited the Enterprise (Kirk off after Orion girls again...) and Kirov away with his light raiders before running behind asteroids - after lobbing a cloud of nukes at my frigates. Meanwhile, his heavier ships formed a solid wedge and rolled up first my lighter ships, then plowed though the middle of my fleet to eventually see off the Kirov as well. I had to beat a hasty retreat. Anyway, less typing, more assembling/painting though I haven't put aside other things.... 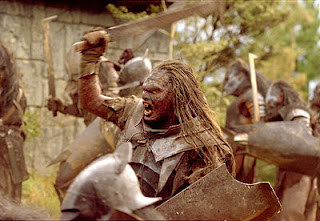