The outcome of this clash is already evident on Tuesday's map (and Jason's excited post) but what follows is the unvarnished AAR prepared for Sheriden and CINCPAC's consideration by the remaining ranking officer: 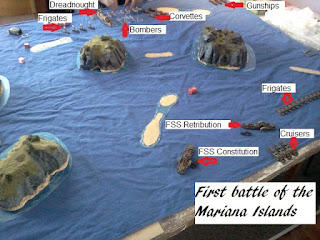 Captain's Log - February 6 1870 13:00: We have encountered the Empire of the Blazing Sun en route from their base in the Mariana Islands. It is a sizable battlegroup, centered around a large Dreadnought class vessel, with a wave or rocket armed flyers and an as yet unknown model of heavy cruiser out on their left flank. With Sheridan heavily wounded from the Battle at Phoenix and Union, Commdore Eriksson is in command and has made the Battleship FSS Retribution his flag. Alongside, we have the unlucky FSS Constitution, three squadrons of Frigates and my squadron of Cruisers. 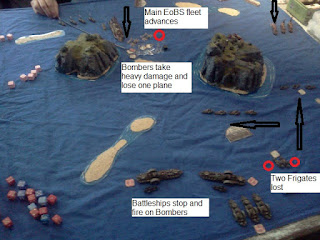 Captain's Log - February 6 1870 13:45: Our first volleys have performed well and we have downed a Blazing Sun Bomber and another trails a great deal of black smoke. The new enemy heavy cruisers appear effective but Eriksson has deployed a frigate screen to harry and them while we deal with the enemy main force. It looks like our frigates will not last long as one squadron is already at half strength. 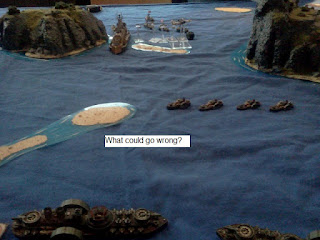 Captain's Log - February 6 1870 13:45: The Japanese main force continues to close. We have inflicted significant damage on their heavy bombers and, - in accordance with new doctrine formulated from AARs vs previous Dreadnoughts - we are now at a range where fire will be effective at the heavier ship's thick hide. It is a nervous moment: intelligence reports that the Blazing Sun Dreadnought is tough but does not bring significantly heavier guns to bear than our battleships. 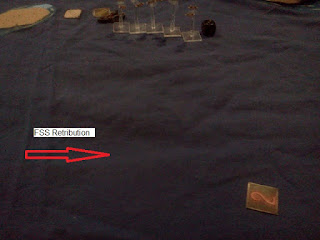 Captain's Log - February 6 1870 13:50: It occurred so fast that only the ringing in our ears exists to corroborate what transpired. The crew of Constitution would have braced from impact after anticipating the bearing of the enemy Dreadnought's guns but would have been dead without realising it. The first enemy volley landed squarely on the magazine - killing all hands and the remaining wreckage sank in seconds. 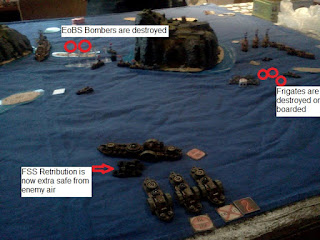 Captain's Log - February 6 1870 14:00: This is a serious blow but we have steel in us yet. If we can get a good volley off at the enemy behemoth, we might have a chance. My Cruisers have done good service reducing the enemy heavy bombers and Eriksson has just given the order for the torpedo bombers to engage the Japanese heavy cruisers at max speed and finish the damaged one. That enemy squadron is taking damage quickly and will soon not trouble us. Enemy torpedo bombers are in striking distance but Constitutions' AA escort has now joined Retribution and once they weather that, we will hit the enemy flag hard. 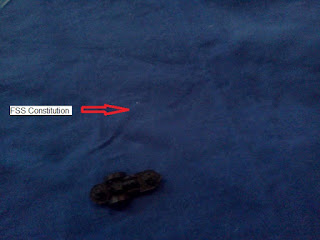 Captain's Log - February 6 1870 14:10: This is a luckless battle - FSS Retribution took a heavy hit from the enemy Dreadnought, which caused a dangerous leak in the fusion reactor. By all accounts the situation was under control but she was now at risk due to the degradation of her depth charges. The Blazing Sun Bombers cam in hard and low - blitzed unscathed through the storm of Ack Ack, then their fast torpedoes beat the depth charges in. They must have homed in on the Battleship's magazine and we were nearly struck by the ensuing flying debris. 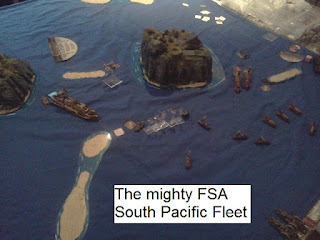 Captain's Log - February 6 1870 14:11: That's it, I'm giving the order to break off.
Well on the upside, war-gaming is a pass-time experienced for enjoyment; so mission accomplished there. Dystopian Wars does have a tad more variance in the dice outcomes than I am accustomed to though!

Thanks for the game Jason and thanks for reading, all
Email Post
Labels: Batrep DW Campaign Dystopian Wars EoBS FSA TMG