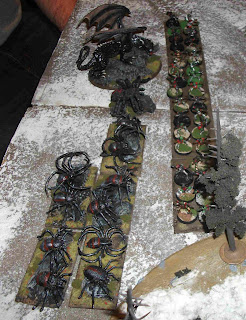 More WOTR Last week - Jason's fiendish Dragon made a reappearance vs my Angmar. I had been planning to run Ithilien but that list lacked Aragorn (since 'someones' constant harping on about him) and so we swapped that out for Angmar. It was the same list as last outing for me, except slightly less foot troops and another Captain for me.

The Dragon (spell casting, of course) was accompanied by 5 coy spiders, four coy Goblin bow, six (?) Coy Goblins with Shields (yes with shields, my opponent is not sad enough to proxy Blackshields unless for our 'experiments') and a Spider Queen. 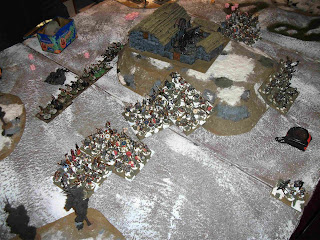 Misty Mountains had priority and with a flap of its black bat-wings, the Dragon was in pole-position occupying the objective. The rest of the Misty Mountains force held back, as if they were mere 'life support' or something. The Dragon was a bit limited in spell-casting targets but was at least able to remove over a coy of Uruk xbow before they got to fire, using his Ruin magic. In return though, the Tainted drew close and with a wave of his ethereal gauntlet, the Dragon felt its sinews twisted with mad power and in its threshing about it did itself much harm (Three 'hits' and then got two 6s on the table - 10 wounds total!). Trapped in the farm, the Dragon was unable to use its new-found strength and had to content itself with lighting up the Tainted's unit with Dragonfire. The Nazgul smiled coldly and forbore to close into melee and instead led his warbands on a short, sharp, strike on the Goblin bow - slaying every last one. 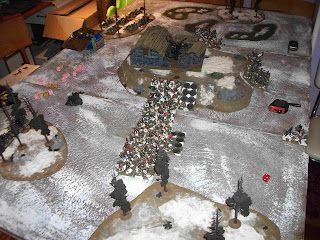 The next turn, the Tainted and his accompanying Chieftain then led the Carn Dum barbarians on the left wing in a sweeping advance toward the Misty Mountains fodder. On the right, the rest of the Barbarians swept forth two, washing around the rock where the Dragon hid and making toward the soft underbelly of its army.
The Dragon leaped forth from the farmhouse but was enshrouded in a pall of inky blackness, so had to content itself with launching spells at surrounding formations - the ranks of the Uruks were growing thin. 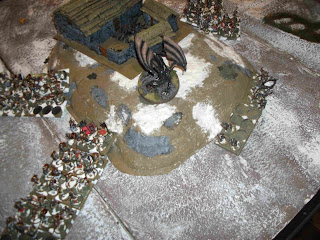 In the third turn, the warriors of Carn Dum looked about and decided to converge on the ruined Farmhouse. The Spider Queen had got there first but the Barbarians had three who warbands ready to evict her while the Nagul again used sorcery to prevent the Dragon from charging that turn.
Enraged at this trickery, that Dragon unleashed spells and dragon fire, decimating the Uruk xbow. No doubt due to having their heads well down, the Carn Dum ballista crew missed wounding it for the third turn running. 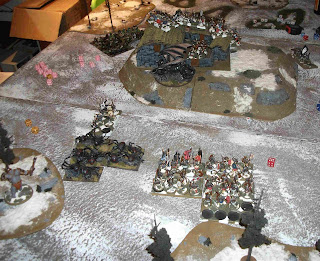 However, amidst the smoke, sorcery, and brimstone in the center, the chitterings of snaky spiders had been ignored too long. They had snuck close enough to charge the flank of one warband clean through a long expanse of forest. And they did, rending and tearing apart most of that formation. Their companions on the far side of the farm did exact vicious revenge, splattering ichor about the farmhouse as they removed the lurking Spider-Queen. 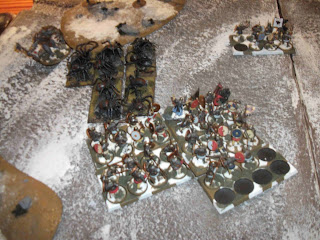 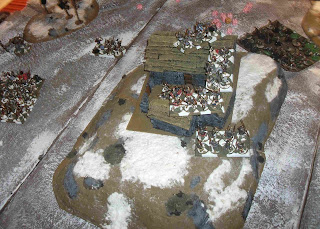 Then on turn four - Buhrdur arrived. Seeing that at last the trap was well-sprung, the Tainted lay off his baiting of the Dragon and unleashed his sorcery's upon it once more.

The great beast looked almost childlike in its surprise as it fell, writhing to the snowy ground in the face of the magical onslaught.
Quickly, Burdur seized the moment and crashed into the rear of the Giant Spiders. Then more Barbarians warband hit their flank.


The outcome was predictable. Once Buhrdur picked up his great hammer and slung it over his shoulder once more, all he could see about him were dead goblins, the great carcass of the felled dragon, the messy forms of squat spiders.... and there, in the distant the retreating backs of little goblins running for their lives.