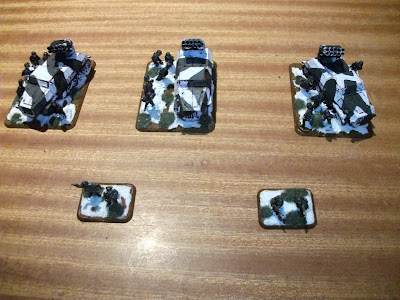 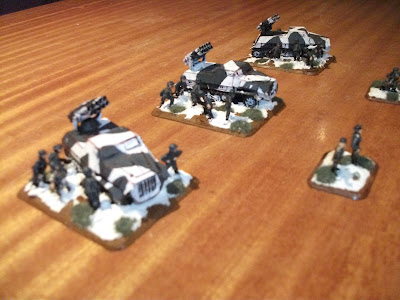 I've had these boys since not long after 'Eastern Front' was released. I took one look at even cheaper Panzerwerfers than the good deal they were in LW, and went out and picked these up. I used to field 105mm arty with my Grenadiers, but they actually put the price of those up, and I had been using borrowed models anyway. So it was a good time for some new models - I like painting FOW armour anyway. I just used the same scheme I used for my Tiger support. It is hardly 'historical', but I like the look. The Grenadiers were the original snow based army for 151st Regt, 61st Division at Kinderheame Hill, Narva 1944.

Basing up that began my habit of basing everything on Snow. Some (ie Jason) are not a fan, but I like winter armies. This unit used up the final spakka-filla in the little tub I bought to do those Grenadiers for Conquest in 2007. With Panzerwerfers and the 4th Pak-40 Dave E is trading me, the same list and models do both LW and MW. All I need to change is take one more Tiger I in LW.
Email Post
Labels: FOW Germans Progress