Our club league began in earnest this week as three dirty power gamers - Jason and Andy on one table, and I on another, faced off in two battles. Poochie was there too, but was locked in mortal combat with Craig!

Aware that the fourth loacl powergamer would play at some stage as well, I took a very toy-heavy list:

Craig kindly took a couple of moments away from his Epic Struggle to snap some early photos of my game vs Stephen, things didn't move too much later on, so they give a good idea of how it went. I am the winter-based Germans, defending on the right, Stephen's well camoflauged Canuks are attacking from the left. His army blended in so well that I totally missed an observer out on his right flank, which called in bombardments on some of my sneaky flankers and broke them off the table! Hills are all diff going and the River is v.diff, aside from the ford. 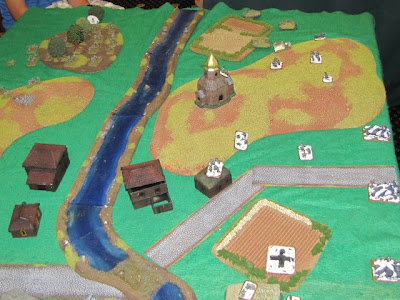 We played the (IMO horribly biased toward the defender) Hasty Assault mission from Das Book. I rolled to defend and set up my winter Grenadiers in the village and hill. Stephen set up to attack my right flank (top of photo, above).... but the Defender gets an immediate ambush and first turn! So a platoon of Brummbars magically appear in cover up there, ready to shoot up any armour and infantry that try to force a crossing. 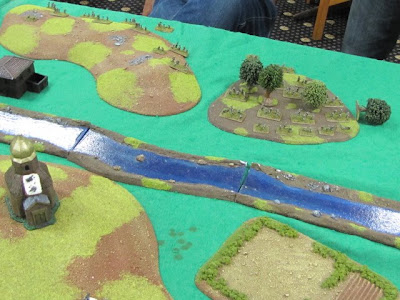 Stephen opts to wait for reserves, so he can at least get a combined arms thing going. Of course, that just speeds up my reserves as well. So we trade bombardments for a few turns, he gets heavy mortars, I get a lovely double-width Panzerwerfer rocket template. Vs trained troops I range in of 5s and get three rolls to do it. 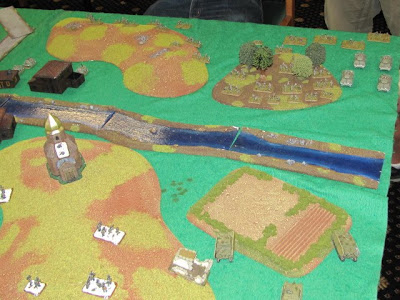 Eventually he massed it all together. However, rather than switching focus once the slow Brumms appeared, he elected to persist with pushing that river crossing. We were playing with our standard diff-going big hills, so he could have re-focused at the double (behind a big hill in his deployment area), while I would have been forced to slowly take those assault guns over the hill, with attendant bogging checks. As it was, my Tiger ace (ROF 3) just rolled up on the hill in the middle, the Brumms kept using mgs on the approaching infantry and the Tiger + Panzerwerfers + Brumms saw off the M-10s.

In characteristic fashion, I lost a platoon, three teams sent off up one flank to threaten the attacker's objective (yes, amidst all the defender's benefits, the attacker is also saddled with an objective to defend!), since I was bored sitting and shooting. So it ended up 5-2 to me. I just can't bring myself to preserve my platoons lol. It was a fun game though, so cheers Stephen!
Email Post
Labels: Batrep Cavs FOW