I've been a bit busy (or perhaps disorganised) so sorry about the lack of any blogging. I did keep to my priorities though - I attended (but did not win, did not do too badly either) Tempest, got some painting done, played Jason @ 500pt WOTR and also managed to actually turn up to club and play on Thursday. So, on balance, I think blogging was the right thing to let slide.

I played Jason at my place on Wednesday, using 'my' winter table and the same format for the 500pt mini-events run @ Comics locally. Sadly, it appears there will again be no WOTR event this month, but Martin is going to give me a proper game at the Cavs next week, so I will get my fix. 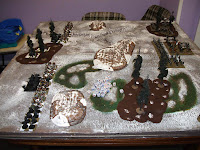 I am on the left and Jason's force was on the right. The objective was that hill in the middle. I had to setup first, so deployed the arty in the forest at the far left and then made Jason move first. Jason tried skulking behind the hill, screening the cav with foot (where did he get that idea, I wonder). I discovered the joy of playing an evil list. The Wraith cast 'Wings of Terror' and whipped his unit forward 24" at the double, then charged 1d6+8". I made the Berserk roll. 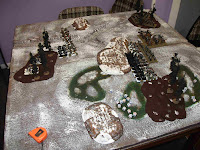 The ensuing melee gives us picture two, where there are considerably less infantry in Jason's foot unit. He got priority this time and went first. He decided to run the Cav off and charge my other warband unit. So the next round saw me repeat last turns spell, whip around, flank the rest of the militia and wipe them out in the melee. Jason's cavalry declared a heroic fight, hit my other warband from the front: str 4 vs def 6 killed half of them, my warband killed nothing, then he got the second charge for winning and wiped them out. So far, we had bagged a unit each. 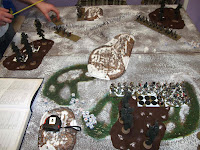 So at turn three, he had priority again and went first again. The Cav went off arty hunting -the arty tended to miss with one out of two bows then get one roll to hit every turn. My Wraith led his troops after the archers. I missed picture 4 somehow, but it took two turns to get to the next pic, where there no archers and no siege bows left and my Wraith's warband occupies the hill, ready to challenge Eorl the young. Again Jason gets priority, but his luck fails him. He fails the charge roll, then we remember that he never rolled for terror - possibly because he had never failed a single courage test so far. But he failed that one. So I charged in, rolled 6 on the berserk, and had four bonus attacks per company due to the effects of terror. Needless to say, that sealed victory to the forces of Angmar!

The next night, I went along to the Cavs and played a newer player, Rick. He ran a 1500pt Panzerkompanie Bake list vs my Latewar Grenadiers, attacking me in 'No Retreat'. Chris set him up with five Panthers, two Tigers, nebelwerfers and infantry. I had two Grenadier platoons, a full 'Black' pioneer platoon, Panzerwerfers with loaders, two Tigers and four Brummbars. I eventually won there too, though my list was definitely what you'd call 'hard' (in my defense, I fell back on taking it after running around getting a huge Strelk together for Chris to use) and Rick was a newer player with a borrowed list. He played it pretty well and his Panthers all lived, but I killed everything else. I owe him an encounter or something more friendly to his army for next time.

Now the project for next week is to get more of my Carn Dum sorted to play Martin's Gondor army. I wonder if it is going to be another troop horde, like his goblins, or if Aragorn or Boromir (+desperate heroics) will appear to chase down my Wraiths.
Email Post
Labels: Angmar Batrep Carn Dum Cavs FOW Ringwraiths WOTR