There wasn't much to report on the Cavs front this week. I played Keith in 1500pt LW Breakthrough (FOW). It was my new 26 tank Tankovy vs his Udarny. The game took too long to play, so we cut it short. He wasn't having a good time of it though. I genuinely do wonder if he has been playing too much vs Dave and Brent, since he does not seem to handle planning out attacking in missions well. Nominally you defend in BT, but in reality it is a 'Free for All in the far corner' and an infantry player (as Keith was) needs to ensure his infantry head there right away, unless he is sure he can destroy my on-table forces before turn 6.

He did have a 'plan' to harrass m 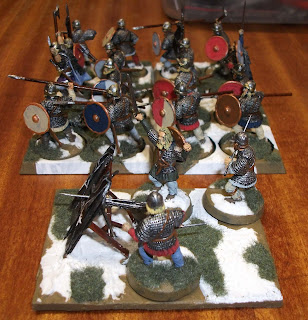 y armour with one Udrany company but of course I could always just drive away. I haven't been playing FOW for a while, so I think I haven't been taking account of how new he is sufficiently and have been keeping my thoughts about his deployment to myself. Brent will never handle BT, but Keith will do fine once he learns the basics (I know nothing advanced about this game). Also, I've been encouraging him to look at rebasing with less guys per stand and go for good old plain CT Strelkovy from Fortress Europe over the glory boys from Stalin's Onslaught. The CT Strelkovy you get LW is a fearsome list, which can tackle anything. Whereas Udarny are less flexible and a smaller army overall. He likes attacking things, so has the right mentality, he just IMO needs to bring more of the tools for the job to keep defensive German players like Dave, Chris et al on their toes.

Also, I have made some progress! This is actually from last week but they were awaiting their banners. Two more companies of Carn Dum Warband and another siege bow. I had originally planned four but I think three will be enough for now.
Email Post
Labels: Carn Dum Cavs FOW Progress WOTR