After extensive lobbying, here is board number three: The forces of Minas Tirith. This board aims to represent the first line of defense against Sauron and I have only added one unit to that seen in the movies: The Axemen of Lossarnach. I have tried to NOT have a unit entry for every single fiefdom but this the most varied list so far. 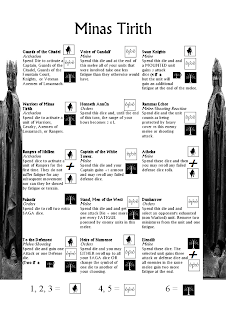 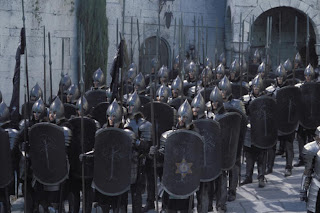 Minas Tirith Forces:
Your Warlord is a Captain of Gondor.
Your force may be composed of Elite or Veteran troops (Hearthguard) or Regular Warriors but (a small band of men from Anfalas, aside) the Armies of Minas Tirith do not generally feature levies.

Poochie is take take on my (half painted!) Isengard next Thursday with this list. Hope he likes it. Next up: Mordor.