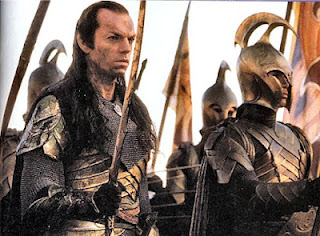 This week's addition to SAGA LOTR is the Elves. I thought the Jomsviking battleboard (with its Wrath mechanic) provided a good way of modelling a smaller force, with superior abilities. The board I came up with mixes Jomsviking, Welsh and Anglo-Dane abilities with a couple I added. It isn't on the pretty full-colour SAGA background as I think this doesn't quite suit the more civilised Elves but I hope that you will find what I came up with ok.  I think this board and list will give a small force that is capable of superior hit-and run tactics while having the option to also field a tough line of heavy troops worthy of the Battle of the Last Alliance. 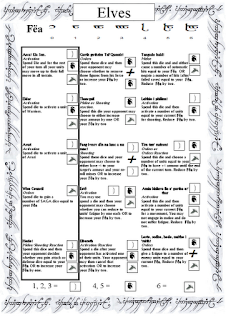 Elves:
This list models the Elven forces from Peter Jackson's movies so is intended to cover the Battles of the Last Alliance, the forces of Rivendell, and the forces of Lothlorien, including those who were at Helm's Deep. To reflect the scarce numbers of Elves in Middle Earth, most of the force will be composed of Eldar (Hearthguard in SAGA terms) and only up to two points may be spent on Avari (Warriors in SAGA terms) for every six points (or part thereof) in the warband. Elves have nothing like levies.

(edited above for **fail**)
Next up...Mordor or Minas Tirith?