SAGA: Thracian Battleboard for the Iliad

Andy is getting into SAGA using some assorted Numidians and Near-Eastern figs that he has. He is going to run them, as Thracians so I've done up a battle-board. 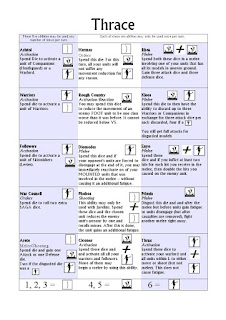 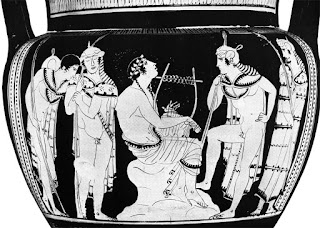 Options:
Your Warlord is equipped with Javelins. Companions (Hearthguard) and Warriors may also have Javelins, which decreases their armour (but not the Warlord's) by one against enemy shooting. One unit of warriors may swap its Javelins for Bows but retain the -1 vs shooting.
Your Warlord may choose to be mounted. If mounted, he changes his movement to L but has -1 armour vs shooting. Companions (Hearthguard) and Warriors may also opt to be mounted. If so their armour (taking into account Javelins) will be -2 vs shooting.

The bulk of the Thracian warbands are composed of the Warlord and his closest Companions
(Hearthguard) along with Warriors drawn from throughout the tribe. The Companions and Warlord my be fortunate enough to have armour like that of their southern Achaean cousins or the rich denizens of Troy. However, the bulk of the tribe is lightly equipped in 'Peltast' fashion with a shield, and javelins.

Their warbands may also have followers (levies), hangers on and skirmishers recruited from amongst the dregs of their society, conquered peoples and other unfortunates. These troops cannot stand against a well equipped warrior if caught in melee but are skilled in sling, javelin, or bow. They do not often appear in heroic tales but had their role to play on the battlefield.
Posted by Jamie at 12:41 AM