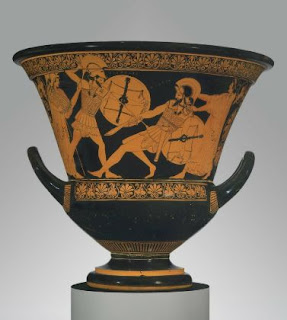 Here is the third board for our test of SAGA skirmish gaming during the period of the Iliad. This is a general list to cover the vast majority of the Achaeans. I do see two specific lists (in addition to Ithaca) that might warrant their own boards and I suggest the Achaean list for now and a revisiting of them when Northern Fury is released:


The upcoming Jomswiking list might prove to be a better fit for the Myrmidons. For the moment, the Myrmidons could be represented by fielding an Achaean force without Levies and emphasising the Hearthguard. The existing Norman hero Ivo Taillefer (though with his ability changed to use unmounted troops) seems a good fit for Achilles: Charging off alone, using the Heracles ability without fatigue and drawing on extra attack and defense dice, in a pinch.


Nestor still trained his forces in the archaic style, with heavy spear and 'figure of eight' Tower-shield. I think that this would make them sufficiently different from the often looser and always more aggressive Achaeans. One option would be the Anglo-Dane board but the upcoming Scots board looks even more promising. 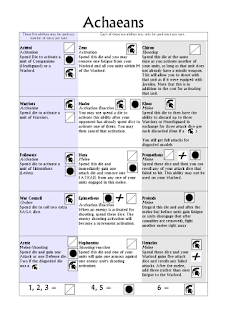 
Your Warlord may exchange his shield for a heavy bow: -1 armour vs shooting and melee and his bow reduces enemy armour by -1. He may also opt to be mounted (in a chariot), which will increase his move to L. Doing so will lower his armour by -1 vs shooting. If he both has a bow AND is mounted on a chariot, his armour will be -1 vs melee and -2 vs shooting.


Greek armies in the the heroic age have two broad groupings: Aristoi (the Warlord and his Hearthguard companions) and freeman warriors. All will be equipped similarily, in the Classical Hoplite fashion. Even a freeman can afford light armour, Hoplon shield and Spear. This is in the familiar style of visual (that I remember from my school age reading) representation of the Illiad – based on pottery from the Classical period. Handily, this fits well with existing 28mm plastic Hoplites (available from two companies, with more planned). However, miniatures do exist that reflect archaelogical evidence of the Mycenaeans, in both metals and 1/72 'soft plastic'. Those plastics are very well done.


Greek armies may also have followers, hangers on and skirmishers recruited from amongst the barbarians, lower social orders and rural folk. These troops cannot stand against a well equiped warrior if caught in melee but are skilled in sling or bow. They do not often appear in heroic tales but had their role to play on the battlefield.

This board is the base for the Ithaca board, which was modified to reflect crafty Odysseus and Athen meddling on his behalf.